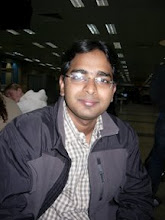 Ans:- Since childhood, I had an inclination towards the charm of Civil Services. Also I have had a natural dispensation towards societal and governmental sides, esp. vis-à-vis international aspects. However, it all came together during my stay in Cyprus where I was working for an IT company. During my stay there for 3 years & a half and also during various foreign travels, I met numerous people, learnt different cultures, observed India’s standing, and realized the issues, potential, opportunities etc of India’s international relations. Thus, I wanted to move into the higher echelon of Indian Foreign Service, where my aptitude, attitude and interest could find its echo.
I left the job in Feb 2010, and came to Delhi to prepare for the exams. I could clear Prelims, however failed to pass the Mains. I joined the same company, though this time in Gurgaon, in Feb 2011, and appeared for 2011 exam while pursuing the job.
The irony though is that I might not get IFS this time around.

Ans :- To be honest, I wanted to take Geography and History, as they have been my favorite ones since school days. Also, being the most traditional and steadfast subjects, not only in relations to Civil Services exams, they have plenty of books, materials, opinions and articles by various authors. I chose Geography in my first attempt in both Prelims and Mains, and it continued till this year. For the second subject, due to paucity of time, I took Public Administration for its less syllabus, more relevance and good record in the Civil Services exams.

So, my selections were based on both interest and practicality, at least which is what I believe.

Q. People initially prepare with much enthusiasm but then a boredom phase comes – they don’t even find the motivation to read the daily newspapers, let alone studying the books.
Sometimes they get diverted because of external factors e.g. heavy workload in office, family responsibilities and so on. How did you sustain the study-momentum throughout the year?

Ans:-
No doubt, it is difficult to sustain the momentum throughout the duration of preparation, which generally spans across a year and a half. So, it is important to take breaks for a fortnight or so, say, after Prelims, Mains etc. Also, a few movies, novels, friends’ parties or get-together, family events once or twice a week, contrary to the popular belief of being diversions, are actually boosters.
This is what I did during my preparation of 2 years.

On an average, How many hours did you study per day? How many months did it take you to complete the core syllabus of GS and optional subjects?
Ans:-
It varied depending on the criticality of the time period. During the months closer to the exams, I studied approx. around 10 hours daily, max being 12 hours which happened only for a few days though. During other months, it dropped down to 6 hours or even lower. So, for the whole duration, I think the average was 8 hours daily. This obviously was for the days when I was not pursuing my job in the office, when I could study for just 2-3 hours daily.
It took me around 9 months to complete both the Optionals and GS.

How did you use computer and internet for your exam-preparation?
Ans:-
I followed the following resources on the Internet:-

The Internet was the most accessible and potent source for me during my off hours in the office.

Ans:-
Unfortunately, my Essay preparation remained poor in both the attempts, and that got reflected in the marks.I didn’t do any special preparation for it, and wrote Essays in the question-answer format. Also, they were a bit lengthy. In 2011, I attempted ‘Small States Implications’ topic, and got a paltry 76.
So, if I have to suggest anything, it would be on rather the don’ts than the do’s.

Q. Serious players get mentally shattered and depressed after failure in competitive exams. How did you cope up with failures and rose from the ashes again? What had gone wrong in your previous attempts? How did you fix those issues in your 2011’s attempt?

Ans:-
The biggest problem in my 1st attempt was the lack of preparation time. I stared very late in my preparation (Feb 2010), thus had a total of 9 months till Mains, which got used up in covering the syllabus only. I didn’t have time to refine or practice my answers. I utilized the next year’s time to work on these aspects.

So, How important or relevant is the profile of a candidate during interview?
How do you rate your own profile?
How much portion of your interview centered on your profile?
Did they ask any uncomfortable questions from your profile?
If yes, how did you reply to those questions?

Ans:-
Yes, my profile was spotted and questioned by the panel. I had a good profile, so there wasn’t the problem of any negativity about it. However, I had to be prepared to justify and elaborate on it. The clincher though was my confidence during the interview.

The details of the Interview are mentioned in my Blog:-
http://prabhakar-in-eldorado.blogspot.in/2012/05/my-ias-interview.html

Q. In case you had not cleared the UPSC exam, what was your career/future backup plan?
Ans:-
Since I was already working in an IT company, I had the fallback option. Furthermore, throughout my preparation, I was prepared for the eventuality that I might not qualify, as this exam needs a lot of extraneous factors too working in your factor, viz. luck, performance on exam-days etc. It is philosophical to say this, but the theme of ‘do your duty, leave the rest to God’ really helps during the preparation.
I got lucky in a few aspects, but also had to face the wrong side of it, as I got really sick during the first 2 days of the Mains, and it affected my Rank too.
But as stated above, I was prepared for it, and in the end, I am happy with my performance, and the Rank.

What is your advice and tips to working professionals – particularly on time Management?

Ans:-
Decide realistically how many hours you can devote to studies on the weekdays. And try to stick to that religiously. For that, the office work has to be completed in time, and that needs to be strategized by you only. Also, don’t commit the folly of neglecting office work, as that can come back to haunt you.
The weekends too need to be planned, as some of the additional things can be done on those days only.
In the end, it will be more challenging to do preparation while continuing the job, but believe me, it is more enriching and satisfying. You earn some money, have a fallback option, and though not noticeable on first look, you also develop good attitude and efficiency.

Q. Behind one topper are many people who stood by him/her during those uncertain times when he/she was merely an ‘aspirant’. Would you like to tell the world, who were those people in your case?
Ans:-
My parents and God, whichever order one might want to put them. Also, my family members with whom I stayed during my preparation. And I must pay gratitude to my teachers, right from my schools to IAS coaching institutes.

About the CSAT aptitude

If you’ve the time, please provide the detailed study plan for your both optional subjects, answer-writing skills etc.
else mere a list of recommended books would suffice.

Tell us about your interview.

Ans-
Details of my Interview can be found at:-
http://prabhakar-in-eldorado.blogspot.in/2012/05/my-ias-interview.html

Q. What is your message to the aspirants?
Ans:-

In the era of blatant marketing propaganda, I too have two similar but unloaded questions. And You can reply “No”, yet it’ll be published without distortion.

IndianOfficer was the major source of information about the Civil Services. Also, it was fun and informative to follow other people’s opinions, preparation strategy, result time anxiety etc in the forum.

I followed a few articles on this website, esp. on Economics. I remember the one on WTO was very informative.