Ans.Sir, she is the president of Brazil.

Ans. sorry sir. She was president and then impeached on charges of corruption.

Q. In some countries, if president is impeached or dies, then VP becomes president for remaining term. Do you think we should do it in India, to save cost of election? Should we have similar system in India? It’ll save cost of re-election before expiry of tenure, after all, president or VP is having a ceremonial role?

Ans. Yes sir, definitely, we should do it. [MISTAKE jumping to good conclusion. Because in India, electoral collage of President and VP are separate. President represents states also.] 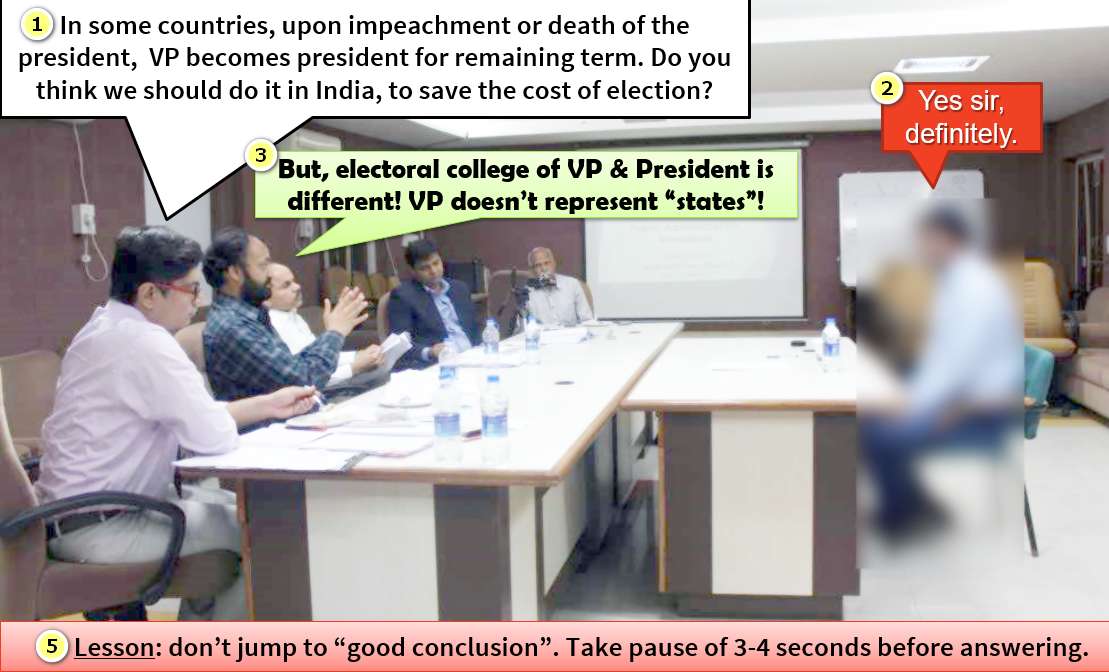 Q. Who is Prashant Kishor?
Ans. He is an election campaign manager/strategist.

Q. Campaign managers are hired in developed countries, do you think it’s a good sign for Indian democracy?

Q. Prashant Kishor helped Modi in 2014 General Election and JDU in 2015-16 Bihar election but then failed in UP election to help Congress Win. Don’t you think he’s like a wedding event manager without ideological loyalty, and doing this activity for money? Don’t you think hiring such consultants further raises the cost of election for parties and after winning, party will try to recover the cost by indulging in corruption?

Q. Who is Irom Sharmila, why did she get only 90 votes? As friend, would you have advised her to hire a campaign manager?
Ans.No sir. [MISTAKE, now grilling starts.]

Q.Irom Sharmila was defeated for her inability to mobilize resources and reach people in effective manner. She did not have election experience like BJP/Congress persons have. So, Irom should have hired a manager. Don’t you think so?

Q. What is the skillset of an election campaign manager? He may also have to do backdoor negotiation and secret-alliances with other parties, yes? Then Who will make a better campaign manager- a retired IAS or retired IFS?

Ans. unsatisfactory. Common Mistake is- if candidate has given first preference to IFS, he’ll say IFS. But, it depends on nature of work – IFS may be away from grassroots political structure, unlike an IAS from the given state-cadre.

Q. Tell me something about contempt of court?

Ans. Sir, it can be used against a party a) not obliging by the court order or B) criticizing judiciary in such manner that it can spread disaffection among people against judicial system.

Q. Do you think election commission should also be given power this power. After all, some parties saying EVM machines hacked- such allegations spread disaffection among people to go for voting/ participate in democratic election?

Q. What is EXIT poll? What are provisions in Representation of People’s Act 1951 related to this? EC has ordered 15 district’s election officers to file separate FIRs against Dainik Jagran for publishing UP Exit poll. Do you think it’s an ‘over-reaction’ by EC? Otherwise why don’t they file single FIR at any one station?

Q. Tell me something about V.K.Sasikala.

Ans. She was a confidante of Jayalalitha and convicted for inappropriate assets.

Q. Where can I find the definition of disproportionate assets?

Q. It’s given in prevention of corruption act.

Ans. ok. [MISTAKE: “ok” nahi “thank you sir”, because panelist himself giving you the answer.]

Q. So for how many years, she’s debarred from politics?

Q. where is this provision given?

Ans. sir, in prevention of corruption act, exact section I don’t know. [MISTAKE: bluffing because it’s given in RPA]

Q. Then What is Lily Thomas Case?

Ans. sir, in Lily Thomas case, SC had ordered Government to implement this 10 years ban. [MISTAKE: again bluffing. Lily Thomas case is ‘MLA/MP will be disqualified immediately, no need to wait till he exhausts appeal structure till SC.]

Q. Suppose after 10 years, Sasikala comes to your house seeking vote for local municipal councilor election and says “I’m a changed person, and I want to reform the system, please give me second chance.” will you give her second chance or not?

Q.(Counter) if you don’t give second chance to a criminal who has served his term, then he’ll be forced to go back in criminal activities.

Ans. Sir, if a person convicted in DA case has served jail term and then starts a restaurant or handicraft business, I may purchase it to give him livelihood opportunity. But allowing them another shot at public office, is something I would prefer to avoid as a voter.