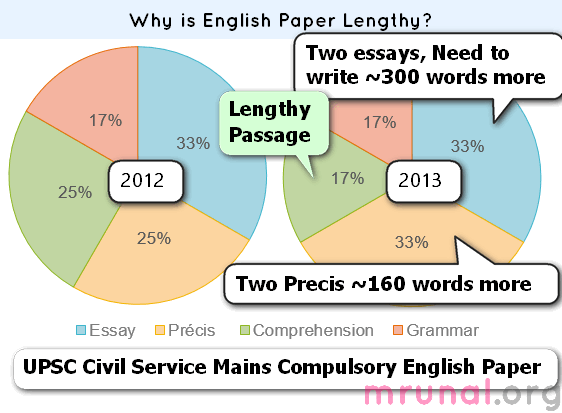 Anyways, let’s check the paper itself (Thanks Kartik for sharing this paper.)

Q2. Read carefully the passage given below and write your answers to the questions that follow in clear, correct, and concise language of your own. 50 marks

In barely one generation, we’ve moved from exulting in the time-saving devices that have so expanded our lives, to trying to get away from them — often, in order to make more time. The more ways we have to connect, the more many of us seem desperate to unplug. Like a teenager, we appear to have gone from knowing nothing about the world to knowing too much, all but overnight.

The average person spends at least eight and a half hours a day in front of the screen. The average teenager spends or receives 75 text messages a day. Since luxury, as any economist will tell you, is a function of scarcity, the children of tomorrow will crave nothing more than freedom, if only for a short while, from all the blinking machines, streaming videos and scrolling headlines that leave them feeling empty, and too full all at once. The urgency of slowing down — to find the time and space to think — is nothing new, of course, and wiser souls have always reminded us that the more attention we pay to the moment, the less time and energy we have to place it in some larger context. Even half a century ago, Marshall McLuhan warned, “When things come at you very fast, naturally you lose touch with yourself.”

Yet few of those voices can be heard these days, precisely because `breaking news’ is coming through perpetually on the news channels, and Meena is posting images of her summer vacation and the phone is ringing. We barely have enough time to see how little time we have. And the more that floods in on us, the less of ourselves we have to give to every snippet.

We have more and more ways to communicate, as Thoreau noted, but less and less to say. Partly because we are so busy communicating. And — as he might also have said — we are rushing to meet so many deadlines that we hardly register that what we need most are lifelines. So what to do ? The central paradox of the machines that have made our lives so much brighter, quicker, longer and healthier is that they cannot teach us how to make the best use of them; the information revolution came without an instruction manual. All the data in the world cannot teach us how to sift through data; images don’t show us how to process images. The only way to do justice to our onscreen lives is by summoning exactly the emotional and moral clarity that cannot be found on any screen.

Maybe that is why more and more people, even if they have no religious commitment, seem to be turning to yoga or meditation, or tai chi; these are not New Age fads so much as ways to connect with what could be called the wisdom of old age. A series of tests in recent years has shown that after spending time in a quiet rural setting, subjects “exhibit greater attentiveness, stronger memory and generally improved cognition. Their brains become both calmer and sharper.” More than that, empathy, as well as deep thought, depends on neural processes that are “inherently slow”. The very ones our high-speed lives have little time for.

Make a précis of the following passage in about one-third of its length. Please do not suggest a title. 60 marks.

Honesty in business dealings or in other areas are not the only measures of morals and values. The strength of character of a person is also measured by uncompromising aversion to cowardice, intrigue, envy, ambiguity, falsehood, disloyalty, treachery, in short, all undignified actions. There are, in reality, few human beings endowed with a truly spotless character. This is because an almost immaculate character does not exist until the last lives in human form. Educated individuals are not necessarily endowed with good morals and values. In fact, some of them use education and their intellect as a tool for deceit. However, the advantages and the need for education and culture cannot be denied. They contribute largely for the development of intellectual ability and the power to reason, which are the means by which the spirit analyses, compares, infers and arrives at conclusions in the search for truth about the meaning of life. The most precious assets of the soul are its morals and values, but they are not easy to build. The character of each person requires longer periods of thoughtfulness, reasoning and the practice of those values, during many reincarnations, in the course of which, ideas sink in under life experiences. It is only after enduring much disillusionment, grief, injustice and ingratitude for many successive corporeal lives, that a person will be able to measure, in the innermost recesses of his soul, the extent of human moral misery. Then, disgusted, he rebels against it and opens the door to a more ethical and honourable life. Thus, having known and experienced suffering, the spirit, in countless reincarnations, gradually frees itself from evil actions and, through enlightenment and conviction follows the rigid tracks of a flawless conduct. It is of great significance to talk about morals and values but it is also crucial to define the lines of character that everyone should consider in their lives. Some of the most important ones are: good judgement, fairness, common sense, punctuality, loyalty, courage, magnanimity, dignity, gratitude, politeness, faithfulness, moderation, truthfulness, self-respect, respect for others, etc. All these qualities, if properly cultivated, compose a prime set of dignifying virtues which accounts for a refined character. For example, we all make mistakes and to err is human. However, once an honest person is advised and becomes convinced of his mistake, he should admit it and try not to repeat it. Unfortunately it is common practice to conceal one’s mistakes, instead of avoiding them. This is very detrimental to spiritual growth. Most people seldom use impartiality and justice in the innermost evaluation of their own actions. Even those who are too harsh in the judgement of other people’s actions, for whom they always have words of criticism and reproach, do not escape the usual tendency. When their own faults are concerned, they find a full, lenient, absolvent justification. In this way, not only it denotes lack of character, but mistakes often end up incorporated to human habits. By acting this way, an individual loses his self-respect and his sense of character and dignity and becomes corrupted. What everyone should do, is to face up his mistakes and avoid new mistakes, by improving his sense of morals and values, with the help of his will-power. (537 words)

Make a précis of the following passage in about one-third of its length. Please do not suggest a title. 40 marks

People write and publish autobiographies and autobiographical sketches for a number of reasons. One of these reasons is to put on record the events of a famous or influential career. But not all autobiographies, not even the autobiographies most frequently and widely read, are by famous or extraordinary men. Another reason is to hand on to others, wisdom won through experience and hard labour. Yet many fine autobiographers seem to have little concern to teach or to persuade. A third reason is to distill from past experience events, persons, and situations which hold a firm place in memory, and to put true values on them. In this sense, autobiography is, as Somerset Maugham has said, a ‘summing-up’, and its first utility is to its author himself.

Whatever its purpose or the fame of the man who writes it, autobiography is a thing created out of the recollections of life. It is not life itself. Whether it be valuable or useless depends upon whether it is well- or ill- made. Good autobiographies can be mined from inconspicuous lives.

For autobiography is the inclusive and summary form of what we call `themes of experience’. It may contain reminiscences, descriptions of places, of animals, of people, the identification of characteristic preferences and prejudices, and other matters as well. It has the traits of all these minor forms.

An autobiography is objectively true, but is not indiscriminately inclusive. It presents a selection of detailed episodes with sufficient fullness to preserve their essential qualities. It is usually written within the framework defused by a consistent point of view. It presents its subject in more than two dimensions, fusing the person and his actions with setting, manner and purpose. One further trait of autobiographical writing raises a few special problems: by its nature autobiography tempts its author to proceed chronologically. The events sort themselves by the calendar, and it is a natural impulse of every autobiographer to begin with the words “I was born on …. ”

Strict chronological arrangement poses a discipline of some force. It is by no means easy to “begin at the beginning, go until you come to the end, and then stop.” Considerations other than the calendar have a way of forcing their way to notice. With due care, however, a chronological autobiography can be accomplished.

It is important to remember that chronology is not the only principle by which autobiography can be organized. Benjamin Franklin, whose procedure in his autobiography is basically chronological, does not hesitate to recognize the Philadelphia girl who laughed at him as the very one who subsequently became his wife. Joseph Conrad prefers the pattern of walking tour to that of the calendar, and his richly imaginative account is stored with pertinent associations of the past with the present and future. Often, to the autobiographer, it seems that life does not pass so much as it accumulates. Qualities emerge as identities independent of time. For this reason, we should not as we write feel compelled to maintain a steady rate of advance through the time marks of our stories. Like Hazlitt on his journey, we linger over a choice adventure or a valued friend, and then, if we choose, we skip a few years to catch up. (541 words)

Q4. (a) Use each of the following words to make sentences that bring out their meaning clearly. Do not change the form of the words, (No marks will be given for vague and ambiguous sentences.) 10marks

Q4(b) Correct the following sentences without changing their meaning. Please do not make unnecessary changes in the original sentence. 10 marks

Rewrite the following sentences using ‘it’ at the beginning of the sentence: 5marks 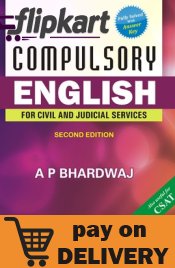 If you want last 17 years’ compulsory English papers in both PDF and MS Word format, then click this link https://files.secureserver.net/0sNYp0XS55m7X5