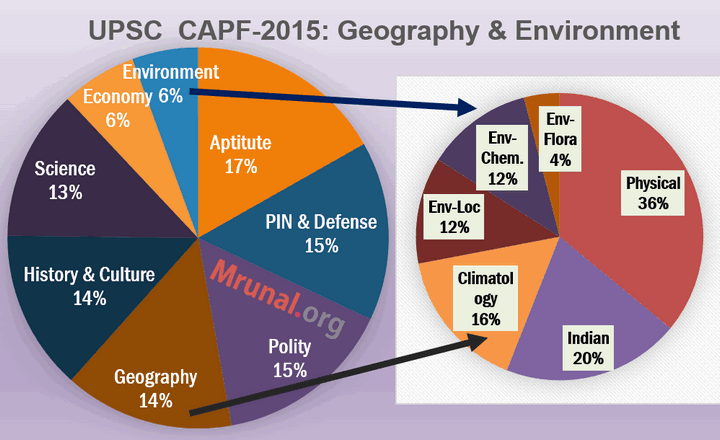 18. Various landforms observed on the surface of the earth are due to the:

Part of Geomorphology. Not from particular topic, but requires general understanding from plate tectonic theory.

25. Match List-I with List-II and select the correct answer using the code given below the Lists:

In my volcanism portion – Hawaiian volcanoes are shield volcanoes is written. But composite and caldera in Indonesia and Philippines is debatable. Because, caldera can be formed at any volcanic site. I explained about Caldera in world geography- New Zealand. So, answer is either C or D. Lake Toba – large volcanic lake/Caldera in Indonesia. Other than that, Indonesia has many sites of Caldera than Philippines. Philippines’ Mayon volcano is famous composite volcano. So, answer could be D.

30. Match List-I with List-II and select the correct answer using the code given below the Lists :

36. Which of the following statements with regard to the continental shelf is NOT correct ?

42. Which one among the following is NOT a minor plate?

79. Which one among the following plains is associated with Limestone Topography?

Statement I : The Indian Ocean Tsunami of 2004 occurred along a subduction zone along west coast of Sumatra

Statement II : Along the Sumatra coast the Indo-Australian Plate converges below the Eurasian Plate

Statement 1 is correct. Subduction of Indian plate along Sumatra coast has led to Tsunami in 2004. Statement 2 s correct. Indo-Austral plate converges below Burma plate near Sumatra Island. Burma plate is minor plate of Eurasian plate. Because of this subduction Sunda trench has been created. The convergence between Indo-austral plate and southern part of Eurasian plate, led to emergence of mountain ranges in Myanmar. Source- Google book: ecology of the Indonesian seas.

This is current-based question. Had one studied the plate-tectonic around Indian Ocean during 2004 tsunami then, can answer well. Otherwise, a general knowledge about locations of ocean-trenches can also give an idea of subduction zone of plate boundaries. In this case, Sunda trench is the key.

Statement I: All the energy received by the earth is from the Sun through electro-magnetic radiation

Statement II: The earth also radiates back all the received energy through various ways to maintain the heat budget of the planet

Both individually correct but II doesn’t explain I, therefore answer is “B”.
Initially 50 unit heat restored but gradually it radiates back all. The earth stays warm not due to restoration of the solar energy but the time gap between incoming n outgoing energy Ref: Rajtanil lecture- G6/P2: Climatology- Heat budget, Temperature inversion

19. Under which of the following condition(s) the occluded fronts are created?

24. Which one of the following factors is NOT connected with planetary wind system?

31. Match List-I with List-II and select the correct answer using the code given below the Lists :

2nd statement is incorrect. Wind blows from north east to south west should be called as northern trade winds.

4th statement is true. Ans. A

48. From which among the following pairs of species, a small quantity of fine quality wool is obtained in India?

India has the 3rd largest sheep population country in the world….A  small  quantity  of  specialty  fibre  is obtained  from  Pashmina  goats  and  Angora  rabbits. as per this textile ministry PDF Hence answer “A”

80. Regur soil is most suitable for the cultivation of :

Black soil or Deccan lava soil is known as regur soil. The soil has high water retentivity, which is important for keeping roots of the cotton moist.

83. Which one among the following is the correct order of west flowing rivers in terms of decreasing size of their river basins ?

84. Which one among the following States is the leading producer of petroleum (crude) in India ?

In data.gov.in Assam has higher production than AP, but data given is highest for GJ-RJ combined.

In 2013 – RJ is the largest crude oil producer, followed by GJ then Assam.

85. Which one among the following States is the leading producer of salt in India ?

Answer- B. Gujarat contributes to over 75% of the total salt produced in India. http://saltcomindia.gov.in/industry_india.html?tp=Salt

37. Arrange the following National Parks of India from North to South direction:

6. In order to create awareness among the people regarding endangered species of tortoise, in the month of February 2015, the third Tortoise Festival was held at :

3rd Tortoise Festival took place at Hojong Lake in Assam on February 21, 2015. The festival was organized by Environment and Forest Department Dima Hasao district. Hajong Lake is popularly known as the tortoise lake, which is a unique and only natural tortoise habitat. says IndiaToday. Hence answer is “A”

72. Which one of the following is the principal place of sitting of the National Green Tribunal?

New Delhi is the principle sitting and Bhopal, Pune, Kolkata and Chennai are other 4 places of sitting. Ref Pearson GS Manual page EB.83

43. The trees of tropical rainforest have buttress roots because :

BBC says Rainforests have a shallow layer of fertile soil, so trees only need shallow roots to reach the nutrients. However, shallow roots can’t support huge rainforest trees, so many tropical trees have developed huge buttress roots. These stretch from the ground to two metres or more up the trunk and help to anchor the tree to the ground.

So, among the given options, “D” is the most appropriate.

44. It is reported that there is an ongoing decrease in the pH value of ocean water because of global warming. It happens due to :

As the amount of carbon dioxide in the atmosphere rises, the oceans absorb a lot of it. In the ocean, carbon dioxide reacts with sea water to form carbonic acid. This causes the ocean to become more acidic says EPA.GOV. Hence answer “A”

50. Which one among the following substances is NOT a ‘green house’ gas?

NIOS Environment Ch.10 page 170: Atmospheric gases like carbon dioxide, methane, nitrous oxide, water vapour, and chlorofluorocarbons are capable of trapping the out-going infrared radiation from the earth… As this phenomenon of increase in temperature is observed in green houses, in the botanical gardens these gases are known as greenhouse gases and the heating effect is known as greenhouse effect. Accordingly by elimination, the answer is Nitrogen- is not a greenhouse gas.

76. Ozone layer depletion is a major phenomenon in:

The stratosphere has an ozone layer which protects the earth’s surface from excessive ultraviolet (UV) radiation from  the  Sun….There has been a reduction of ozone umbrella or shield over the Arctic and Antarctic regions. This is known as ozone hole. Hence answer “B”