Thought Process before the Answer Writing

How to introduce the answer? 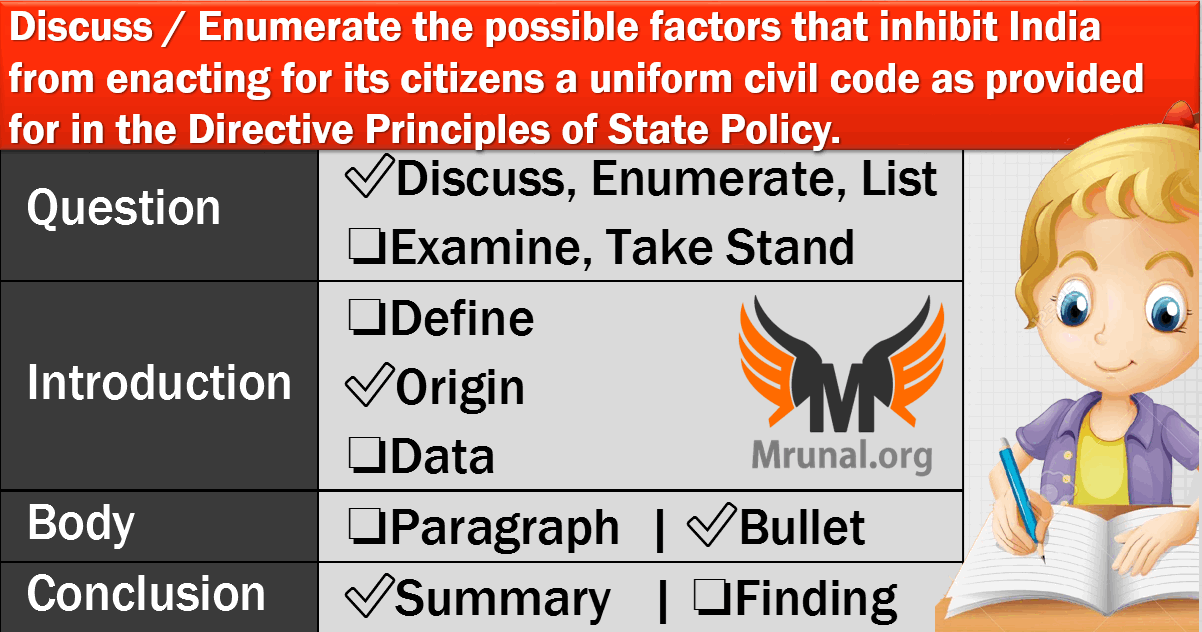 After the mutiny of 1857, the social reforms zeal of the British had declined. They avoided interfering in our religious practices. Consequently, the British legacy in India is common penal code (drafted by Lord Macaulay) but not a common civil code. After Independence, Prime minister Pt.Jawaharlal Nehru, and the law minister Dr. B. R. Ambedkar both wanted to enact a uniform civil code but…..

In India, each community is governed by its own customs and personal laws related to marriage, divorce, maintenance, adoption, succession and inheritance. The idea behind uniform civil code is to merge them into a single gender neutral code applicable to all citizens of India. But, the following factors have delayed its enactment:

In all three questions, the basic points remain the same i.e.

I’m constructing the body only for the first question. It’s for you to use, manipulate, edit and enhance it for your answers for second and third question. First let’s brainstorm the points then compress it.

Thus, by mentioning three major religions, I have made it a balanced answer. Yes, there are similar problems in other religions or sects also and some provisions could be anti-males also, but we lack both the time and space to fit them in 200 words.
The logical structure is similar to MODVAT, CENVAT, VAT then finally GST. Reforms are always in gradual manner with consensus of all Stakeholders-You can’t create things directly in the air- be it GST or UCC. Speaking of stakeholders let’s start second part of body:

While all progressive citizens and leaders agree to the need of reforming the personnel laws. But, there is no urgency to arrive at consensus over the issues such as:

For “Discuss” type question, your conclusion is simply the summary of what you’ve written in the body.

“Although courts have highlighted the need of a gender-neutral UCC in various judgements, but till date it’s not enacted partly due to political hesitation in reforming individual laws first, and partly due to lack of consensus on the scope and span of its provisions.”

When you’re asked to “critically examine” or “do you think” or “suggest alternatives” then conclusion will be “finding/judgmental/taking a stand- yes or no? are you in favour or against?” Let’s try both ways:

(Against UCC): Although both directive principles and supreme court has highlighted the need of UCC, but given the aforesaid constrains, we should rather strive to make individual religion’s personal laws ‘gender neutral’, rather than a uniform civil code applicable to all religions.

(In favour of UCC): “Although directive principles are non-justiciable in nature, political parties are answerable to voters. Since women-sensitive issues are gaining prominence in elections, the aforementioned constrains will be resolved eventually and the uniform civil code will become a reality.”

Even after deleting my comments and side notes from introduction, body and conclusion, any of the above answers will be ~560 words. So let’s compress it in the required range of 200 words. [so consider this an example of precis writing as well.]

The Model Answer in English

Q. Discuss / Enumerate the possible factors that inhibit India from enacting for its citizens a uniform civil code as provided for in the Directive Principles of State Policy. 200 words

In India, each community is governed by its own customs and laws for marriage, divorce, maintenance, adoption, succession and inheritance. Uniform civil code aims to merge them into a single law applicable to all the citizens of India. But, it’s hampered by following factors:

Stakeholders are divided over the scope of “civil code” versus the span of “uniformity”, what constitutes an “essential religious practice” versus what is a “social custom” from the medieval times? Consequently, no consensus over:

So considering all these, and for the reasons of space and practicality, I’ve skipped. Besides: