Q. Which one of the following statements about the Elephanta Island is correct? (CDS-2018-i)

Q. Name the platform used for ritual purposes by the kings of the Vijayanagara Empire. (CDS-2018-i) 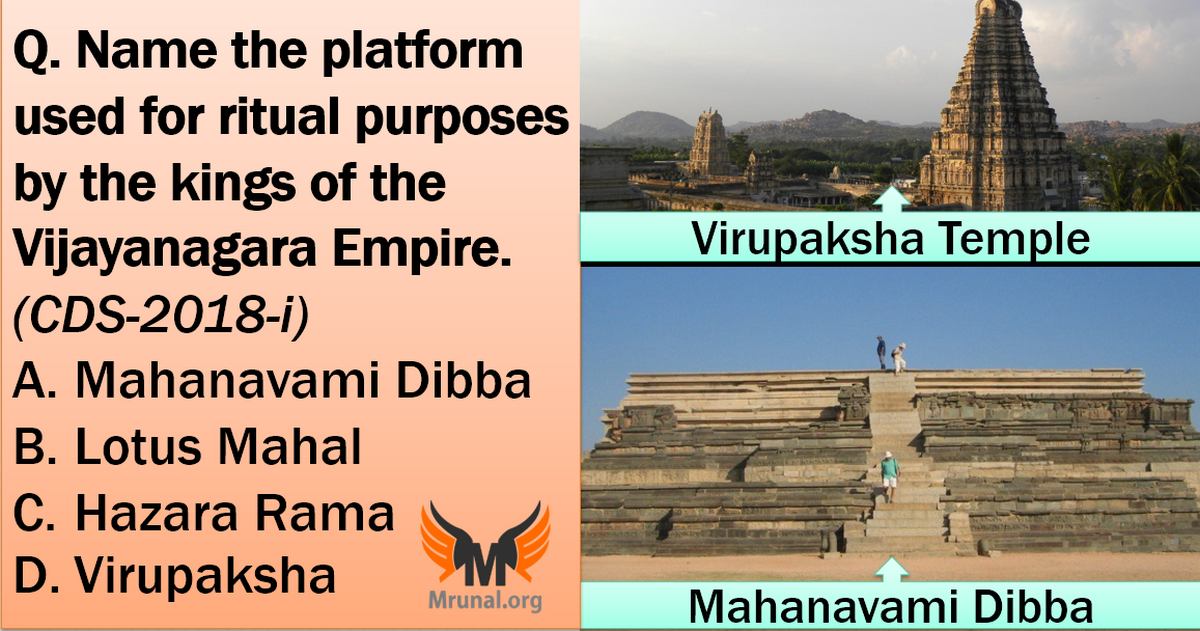 Q. What is/are the common elements between the Kailasanatha temple at Ellora and the Shore Temple at Mamallapuram?

Select the correct answer using the codes below.

Q. In the 10th Mandala of the Rigveda, which one of the following hymns reflects upon the marriage ceremonies? (CDS-2018-i)

Q. In ancient India, many plays/theatres/dramas were compiled by noted authors. Consider the following:

The above type of writings can be narrated to whom of the following authors?

HINT: The importance of the traditions of the Alvars and Nayanars was sometimes indicated by the claim that their compositions were as important as the Vedas. For instance, one of the major anthologies of compositions by the Alvars, the Nalayira Divyaprabandham, was frequently described as the Tamil Veda, thus claiming that the text was as significant as the four Vedas in Sanskrit that werecherished by the Brahmanas. Ref: NCERT Std. 12- Themes in Indian History Part-II, Chapter 6 Bhakti – Sufi Traditions Changes in Religious Beliefs and Devotional Texts (c. eighth to eighteenth century)

Q. Verses ascribed to poet-saint Kabir have been compiled in which of the following traditions? (CDS-2018-i)

HINT: Verses ascribed to Kabir have been compiled in three distinct but overlapping traditions. The Kabir Bijak is preserved by the Kabirpanth (the path or sect of Kabir) in Varanasi and elsewhere in Uttar Pradesh; the Kabir Granthavali is associated with the Dadupanth in Rajasthan, and many of his compositions are found in the Adi Granth Sahib. So, All three are correct. [Ref: NCERT Std. 12- Themes in Indian History Part-II, Chapter 6 Bhakti – Sufi Traditions Changes in Religious Beliefs and Devotional Texts (c. eighth to eighteenth century)]

Q. Which Buddhist text contains an account of the Mauryan Emperor Ashoka? (CDS-2018-i)

Q. Which one of the following statements about Buddhist Stupas in India is not correct? (CDS-2018-i)

HINT: They were located in rural areas is not correct. According to a Buddhist text known as the Ashokavadana, Asoka distributed portions of the Buddha’s relics to every important town and ordered the construction of stupas over them. [REF: NCERT Std. 12- Themes in Indian History Part-I, Chapter 4 Thinkers, Beliefs and Cultures]

Q. Around twelfth century Sufi Silsilas began to crystallize in different parts of the Islamic world to signify (CDS-2018-i)

HINT: Sufi silsilas began to crystallise in different parts of the Islamic world around the twelfth century. The word silsila literally means a chain, signifying a continuous link between master and disciple, stretching as an unbroken spiritual genealogy to the Prophet Muhammad. It was through this channel that spiritual power and blessings were transmitted to devotees. Special rituals of initiation were developed in which initiates took an oath of allegiance, wore a patched garment, and shaved their hair. Thus, all statements are correct. [REF: NCERT Std. 12- Themes in Indian History Part-II, Chapter 6 Bhakti]

Q. Which one of the following statements is not correct? (CDS-2018-i)

Q. What is the name of the literary genre developed by the Khojas who are a branch of the Ismaili sect?: (CDS-2018-i)

Q. Which one of the following temples of India has won the ‘UNESCO Asia Pacific Award of Merit, 2017’ for cultural heritage conservation? (CDS-2018-i)

HINT: The massive renovation and restoration effort at the Sri Ranganathaswamy Temple in Srirangam, executed through the public-private partnership model, has won the UNESCO Asia Pacific Award of Merit 2017 for cultural heritage conservation Ref: [TheHindu, November 2017]

Q. Which of the following statements about the usage of the term ‘barbarian’ is/are correct? (CDS-2018-i)

Greek word “barbaros” means foreign or rude. Romans used the term “barbarian” to mean someone who did not speak Latin- and it included all Germanic tribes, Gauls and Huns. [Ref: Google Books]

Q. The idea of ‘Farr-I Izadi’, on which the Mughal Kingship was based, was first developed by which one of the following Sufi saints? (CDS-2018-i)

Q. Which of the following is/are the feature(s) of the Brahmadeya Grants during c 600-1200 AD? (CDS-2018-i)
1. Their creation meant a renunciation of actual or potential sources of revenue by the State.
2. These grants could vary from a small plot to several villages.
3. Most grants were made in unsettled areas
Select the correct answer using the code given below.

HINT: Brahmadeya (given to Brahmin) was tax free land gift either in form of single plot or whole villages donated to Brahmans in the early medieval(600-1200 AD) India. As per many inscriptions like Uttarmerur during Chola large scale land was expanded under agriculture and irrigation. This can be attributed to the Brahmadeya land grants hence all three statements are right. Ref: NCERT Standard 7, Chapter 2 NEW KINGS AND KINGDOMS.

Q. Consider the following statement: “So much is wrung from the peasants, that even dry bread is scarcely left to fill their stomachs” Who among the following European travellers had made the above statement about the condition of peasantry in the Mughal Empire?: (CDS-2018-i)

HINT: Francisco Pelsaert, a Dutch traveller, visited the subcontinent during the early decades of the seventeenth century had said this. Ref: NCERT Std. 12- Themes in Indian History Part-II, Chapter 5, Through the Eyes of Travellers Perceptions of Society (c. tenth to seventeenth century)

Q. Assertion: The Lucknow pact was signed between the Congress and the Muslim leagues in 1916. Reason (R): The younger militant nationalists of league advocated coming closer to congress on issue of self-rule.

HINT: B, There was a demand for temporary convergence of issues by leaders of muslim league when it comes to safeguarding of issues for muslims and go for self rule. Though they never absolutely demanded to go strongly with the congress.

Q. The Sanyasi revolt took place during the company rule and Warren Hastings subdued the sanyasi revolt after a great campaign. Which of the following works are based on the revolt?

Q. Which of the following statements about the Non-Cooperation Movement is/are Correct? (CDS-2018-i)

HINT: From Plassey to Partition by Shekhar Bandyopadhayay. Chapter 6- The age of Gandhian Politics. Page 303:

HINT: 2017 marked the 200th birth anniversary of Sir Syed Ahmad Khan, the founder of Aligarh Muslim University, may be that’s why UPSC asked this question. In 1875, the Muhammadan Anglo-Oriental College was founded by Sir Syed, he was quite willing to take on the religious clergy, which opposed scientific education, and was even called a kafir for his pains. He was ridiculed and ostracized but he forged ahead. Hence #4 is right, and there is only one option with this combo. (Ref: Indian Express Article in November 2017)

UPSC examiner’s sudden “PREM” for Gandhi in this CDS-2018-paper, is ‘curious’.

Q. Consider the following statement: “A sound body means one which bends itself to the spirit and is always a ready instrument at its service.” The above statement is attributed to (CDS-2018-i)

Hint: Gandhi returned to India for good in January 1915. In April of the same year, he wrote a letter to a Tamil colleague in South Africa, explaining why (in his view) sport was not, for him, an ideal form of physical exercise. At this time Gandhiji gave this quote. Ref: Telegraph

Q. Who among the following was the founder of Phoenix Settlement? (CDS-2018-i)

HINT: Phoenix Settlement, founded by Mahatma Gandhi in 1904 on the north-western edge of Durban to experiment with satyagraha, sarvodaya and ahimsa (non-violence). It was here Gandhiji first used three principles to champion the cause of mine and sugarcane workers, liberation of women and fight against alcohol. REF: various GK books on Gandhi’s life.