Q10. What are the two major legal initiatives by the State since Independence, addressing discrimination against Scheduled Tribes (STs) (150 words, 10marks, asked in UPSC Mains 2017 GS1)?

Brainstorming & Padding up the answer 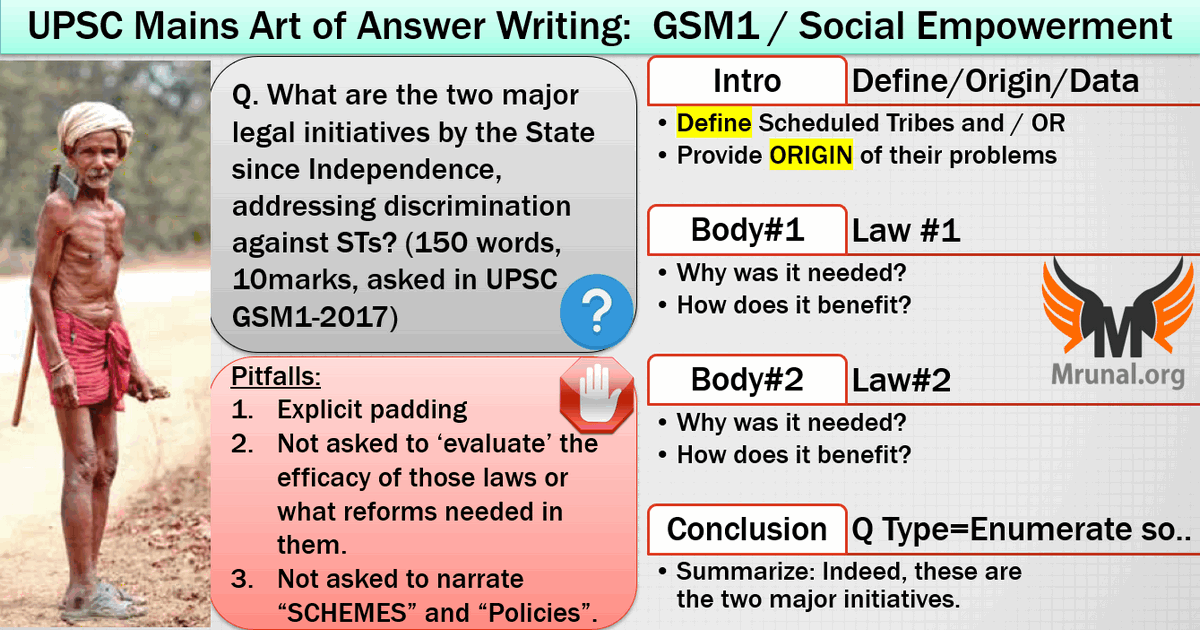 As such there are three primary ways to introduce an answer: 1) Define 2) Origin 3) Data. You can pad the answer by giving both Definition of ST + Origin of their problems which necessitated the enactment of laws.

(#) When mentioning the abbreviation for the first time, you should give its full form, as I’ve done with the ST.

The STs in particular, face following atrocities namely- denial of forest rights, preventing candidates from filing of nomination in election, accusation of witchcraft, disrobing of women and sexual harassment, defiling their sacred places and forest deities, imposing social or economic boycott, abusing them through words, acts or gesture. (SEE? I again padded up the answer by providing ‘preamble / motive’ behind this act, instead of directly writing the salient features.)

This act provides 1) individual rights and 2) community rights to the forest dwellers.

Under this act, Land titles (Pattas) are given to the forest dwellers, if they have been cultivating for generations (75 years to be precise) The benefits are as following:

(#) Here often candidates enthusiastically name all the specific Government schemes to padup the answer but it leaves poor impression on the evaluator that “candidate has deviated from the original question, and writing things as if it’s a question about agriculture schemes”. So, just narrate the schemes in generic name.

As such FRA act can be summed up in single line: 1) land titles and 2) community rights. But for padding the answer till 150-250 words, you’ve to elaborate like above- by connecting the dots with land title to agro-schemes and how it helps tribal people.

Mind the spelling– when you connect ideas: A with X and B with Y then its former—latter (not later or letter)