Q. In 2018-October, Supreme court ordered the Union Government to investigate the mass deaths of Gir Lions, which is caused by _ _ _ virus.

HINT: In Africa, Peste Des Petits Ruminants virus (PPRV) / Goa Plague killed 1/3rd of lion population. In 2012, it appeared among the Gir lions as well. but the present crisis is because of the deadly Canine oil paint Distemper virus, which can’t be cured easily, but prevented through vaccination of lions, dogs and cattle.

Q. In 2018-October, Intergovernmental Panel on Climate Change (IPCC) released a Special Report on Global Warming at an event in Seoul, South Korea. Which of the following are mentioned in its major finding(s) and suggestion(s)?

Q. Who among the following is/are given “Champions of the Earth” Awards-2018 by the UNEP?

HINT: Modi given this for leadership of the International Solar Alliance and pledge to eliminate single use plastic in India by 2022. Macron also given for ISA. Cochin airport given for being 100% solar powered.

Q. In 2018-September, Macedonia held a public referendum to decide what?

HINT: Macedonia declared independence in 1991 from Yugoslavia. But neighbor Greece also had a region named Macedonia. Hence UN and other agencies were forced to call it “the former Yugoslav Republic of Macedonia”. If this referendum is accepted, then country’s name will be changed to “North Macedonia” (capital Skopje), and Greece will end its veto on Macedonia’s membership application to NATO and the EU.

Q. Which of the following countries has launched a manual of “Feminist foreign policy” (in 2018-September)

HINT: New Zealand Prime Minister Jacinda Ardern had been in news for birth of her first child in 2018-June, but it’s Sweden who launched this manual.

Q. Find incorrect statement about BIMSTEC and its latest fourth Summit of 2018:

HINT: Only 7 countries, Maldives not part of it. Summits held every four years starting from 2004.

Q. In 2018-September, India held 2+2 Ministerial Dialogue with USA at New Delhi. Who among the following were the parties in this dialogue?

HINT: India was represented by two female ministers. The next 2+2 meeting is to be held in the United States in 2019

Q. The first Global Mobility Summit was held in 2018-September. Find correct statement(s) about it

In 2018-September, Presidential elections were held in Maldives. Who among the following has won it?

Q. In 2018-September, Government of India announced the merger of _ _ _ bank(s) with Bank of Baroda.

HINT: Government announced the amalgamation of three banks — Bank of Baroda, Vijaya Bank and Dena Bank — it’ll create country’s third largest bank with a business of Rs 14.82 lakh crore and over 9,600 branches across the country. Previously, Government has merged the 5-Associated Banks and Bharatiya Mahila Bank with SBI in 2017- Watch my lecture about the previous merger.

Q. In 2018-September, RBI issued guidelines for “co-origination of loans”. Why?

Q. Infrastructure Leasing & Financial Services (IL&FS) is an unlisted infrastructure lending company (NBFC). It’s in controversy due to inability ot pay interest to the bond holders. Who among the following is the largest shareholder of this company?

HINT: LIC is the largest shareholder in the company (~25% shares). HDFC, SBI and Central Banks have shareholding in single digit percentages only.

Q. The GST Council has setup a seven-member ministerial panel under to examine the legality of imposing a new tax on certain goods and services to raise money for natural calamity-hit states like Kerala. Who is chairman of the panel on “Calamity Tax”?

HINT: He belongs to the state where mass cheating in board exams is done through wall-climbing spidermen, and even woman bathing in the holy river of Ganga is also not sparred from gang-rape.

Q. HRD ministry has decided to participate in Programme for International Student Assessment (PISA)-2021. Find correct statement(s) about this test.

HINT: It’s a test coordinated by OECD countries, conducted every 3 years to measures reading, mathematics and science of 15 years old kids. 2009 India perfomed poorly, so the then UPA government boycotted the test. Subsequently, we didnot not participate in the 2012 and 2015 cycle. But now HRD ministry said yes we’ll do it in 2021.

HINT: Pakyong Airport is located merely 60 km from the Indo-China border and is expected to be a boost to the Indian defence forces, since Indian Air Force will be able to land various types of planes at the airport. SpiceJet will run daily flights between Kolkata and Pakyong, under the Ministry of Civil Aviation’s Ude Desh Ka Aam Nagrik (UDAN) scheme.

Q. Arthur Ashkin, Gérard Mourou and Donna Strickland are selected for Nobel Prize in Physics-2018 for their research on

HINT: 2018: given for research in optical tweezers for biological systems and optical pulses- collectively they are associated with “Laser Physics”. Donna Strickland is third lady to win Physics Nobel.

Q. Frances H. Arnold, George P. Smith, and Gregory P. Winter are selected for Nobel Prize in Chemistry-2018 for their research on

Q. Who among the following has won the FIFA-2018 Player of the year award, announced in 2018-September?

HINT: FIFA-2018 cup held at Russia, France defeated Croatia in finals. But Modric played instrumental role in helping the country reach the finals, so he was given this award. Previous two FIFA-Player of the year awards won by Ronaldo. 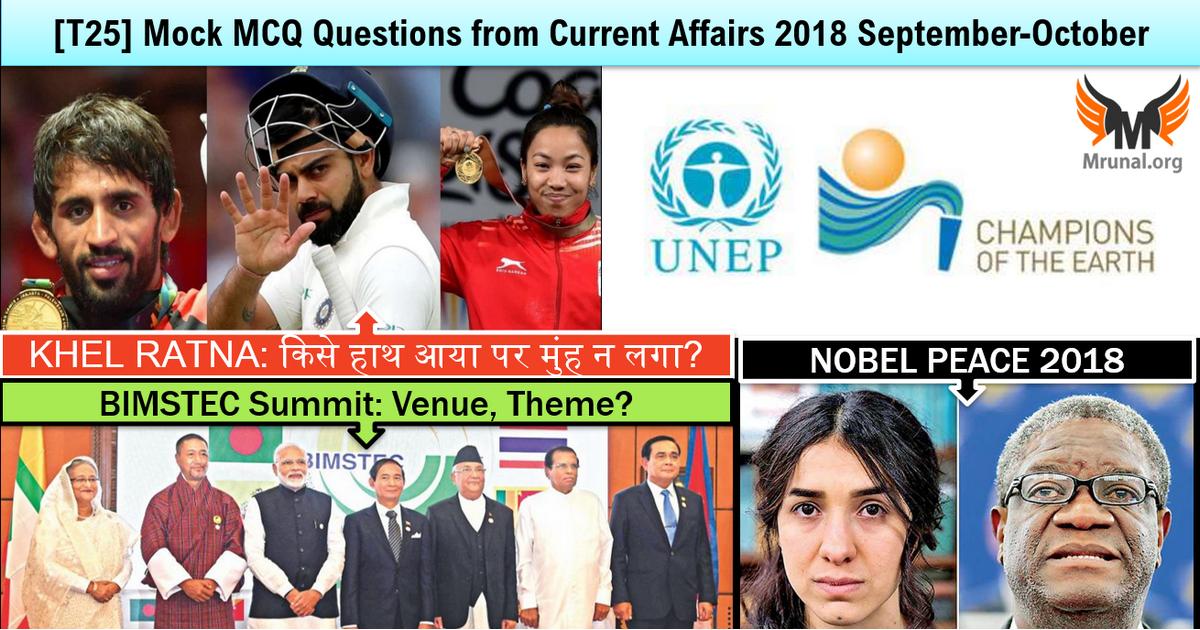 Q. Find correct pair(s) of appointments made in September-October 2018:

Q. In 2018-Sept, Nawazuddin Siddiqui starrer biographical movie about Urdu author Saadat Hasan Manto was released. Which of the following novel / short story is associated with this author?

Q. Noted Historian-Autor Ramchandra Guha released a book on Gandhi in 2018-September/October. What is its title?

HINT: Guha released Gandhi: The Years That Changed the World (1914-1948). Available at amazon

HINT: Collective nouns for animal groups are given but group of kitten is usually called ‘litter’. whereas the word ‘flock’ is associated with group of birds or sheep.