Instructions for 25 Mock MCQs for UPSC: Set No.30

Q. Vice President will have to notify the President’s resignation to ____immediately. (GPSC-DySO-2018)

HINT: The lady who is smiling in the following meme. 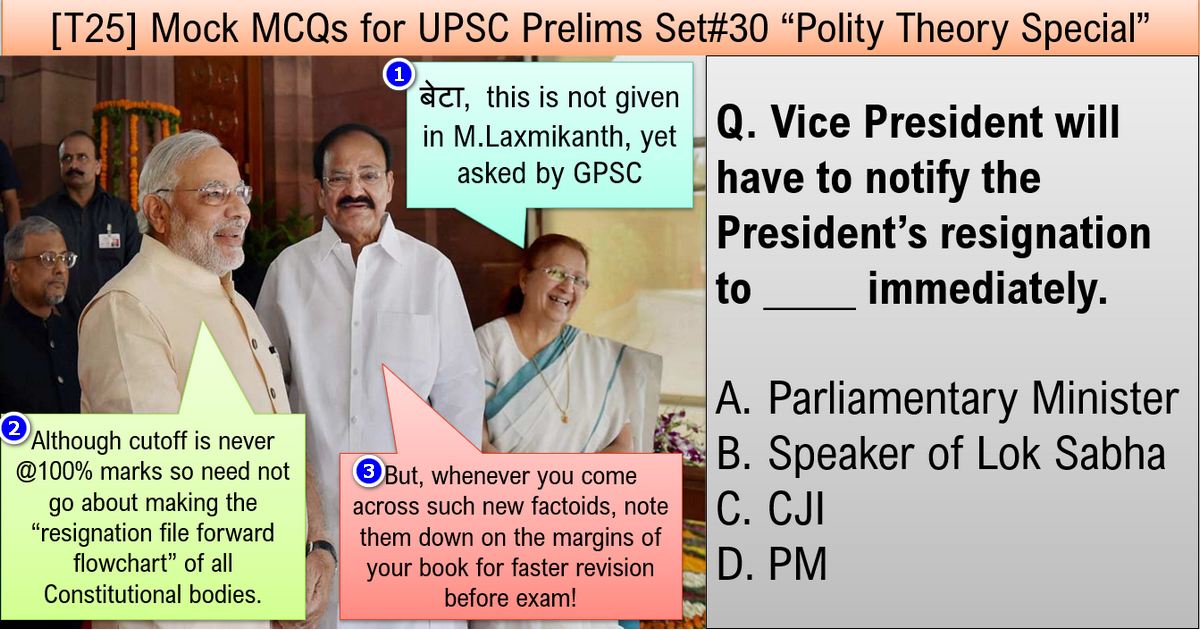 Q. In case of impeachment on the President for violation of the constitution of India, which of the following is not correct? (GPSC-DySO-2018)

HINT: Don’t you think the notice period time limit is too short? Refer to chapter 17 of M.laxmikanth’s book available in Hindi & English.

Q. Which one of the following is not among the duties of the Chief Minister? (CDS-ii-2018)

HINT: If chief minister has to send monthly reports to the President of India, Then what is the point of having a Governor in the state and paying him a hefty salary!!

HINT: Is vigilance commissioner a constitutional body that he will get such superpower?  and if courts are given such power, don’t you think it will encroach upon the executive autonomy? Read chapter 22 of Laxmkant learn more about the 42nd and 44th Amendment

Q. The state level minister of parliament can hold the portfolio during pleasure of the _ _ _ _. (GPSC-DySO-2018)

HINT: Union executives hold the office during pleasure of who? Recall article 74 and 75.

Better you read the chapter 30 of Laxmikanth before attempting the following questions related to governor.

Q. Which one of the following regarding the ordinance – making power of the Governor is not correct? (CDS-ii-2018)

HINT: If the Governor could make ordinances as and when he pleased without consulting the ministers of the ruling party of the state, then don’t you think Modi government could do whatever it pleased in W.Bengal, even though Trinmool congress won majority in the State!?

Q. Which of the following is not related to the powers of the Governor? (CDS-ii-2018)

HINT: This question is more easy than necessary even for UPSC’s CDS standards.

Q. Which of the following are the discretionary powers given to the Governor of a state? (UPSC-2014)

HINT: If the Governor could appoint Ministers as per his whims and fancies, don’t you think Modi-sent Governor of W.Bengal would deliberately appoint ministers from TMC MLAs who have rebellious nature against Mamta OR he could refuse to administer oath to a minister about whom governor has negative feelings!? Then think, whose prerogative it is to select the ministers in his / her cabinet? and whether the Governor has any discretionary power in appointing or not appointing such as person/MLA as minister?

HINT: Bihar PCS should learn from Gujarat PCS- which is setting even more tougher questions than UPSC itself.

Q. Lok Sabha will be constituted by maximum of …….. Members elected by local electoral unions of states through direct election? (GPSC-DySO-2018)

HINT: In Lok Sabha, 20 members are to be the representatives of the union territories and 2 members are to be nominated by the president from the Anglo-Indian community and the total strength can’t be more than 552. So deduct the figures to find the Maximum members directly elected from States?

Q. The parliament can not extend duration of parliament for more than _ _ period by enactment after cessation of emergency. (modified from GPSC-DySO-2018)

Q. When parliament is dissolved, The Speaker ……….., till first assembly of the parliament after dissolution. (GPSC-DySO-2018)

HINT: Same as above, Read chapter 22 of M.laxmikanth’s book available in Hindi & English.

Q. If a question of disqualification of a member of anyone of both houses of the parliament arises, the matter will be written to _ _ _ for decision and decision of the same will be final. (GPSC-DySO-2018)

HINT: Same as above, Read chapter 22 of M.laxmikanth’s book available in Hindi & English.

Q. Which one of the following is not considered a part of the Legislature of States? (CDS-ii-2018)

Q. The audit reports of the Comptroller and Auditor General of India relating to the accounts of the Union shall be submitted to (CDS-ii-2018)

HINT: Reports and bills are tabled in the Parliament under whose name?

HINT: The Union executive consists of the President, the Vice-President, the Prime Minister, the council of ministers and the attorney general of India. Then under whose stamp and seal would this gentleman be appointed?

Q. The chairman of the State Public Service Commission is appointed by (Bihar PCS 2018)

HINT: High Court judges are appointed by the president, but their oath is  administered by the governor. Same is not the case with State PSC folks.

Q. Attorney General of India will get remuneration fixed by ……… (GPSC-DySO-2018)

HINT: Go by the elimination method.

Q. Which of the following is not under the powers and functions of the Election Commission of India? (CDS-ii-2018)

HINT: Mind it, you have to find the wrong statement, not the correct ones.

HINT: If the union home ministry decided the election dates, then ruling party could delay the elections forever in the seats where it is likely to get defeated by citing law and order challenges!

Q.  Which union territory does not have Panchayati Raj System ? (GPSC-DySO-2018)

HINT: Going by the page 3 of Kurukshetra January 2014, PRI system exists in all states (except Nagaland, Meghalaya, Mizoram) and exists in all Union Territories except the most polluted, congested, crime & coaching-thugs infested UT among the given options.

Q. Which of the following statement(s) is / are correct regarding the provisions for arrest and detention under article 22 of our constitution: (modified from GPSC-DySO-2018)

HINT:   What if the diesel tank of police Jeep is empty or tyre gets punctured?

HINT:   A rather easy question for UPSC, can be even guessed correctly. Available in the second chapter of M.laxmikanth’s book available in Hindi & English.