Q. In the Manusmriti which form of marriage results from the “Voluntary union of a maiden and her lover”? (Asked in UPSC-NDA-2019-i)

HINT: Bolo, instead of the usual Buddhism questions now UPSC examiner is also asking Vedic, Brahminical and Manusmriti questions. Even in CDS-2018-II there was a question on Manusmriti about what ways can a woman acquire wealth. Does it indicate a change of examiners in the UPSC panel under the Modi Raj!? Anyways,

Very factual question, in real exam better to skip it if you do not know the exact answer.

Q. Consider the following description of the Samadhi of a former Prime Minister of India : (Asked in UPSC-NDA-2019-i)

Central Samadhi platform comprises nine square black polished granite solid stone blocks, capped with a ‘Diya’ in the centre. The number nine holds significance and represents the navarasas, navaratras and navagrahas. Then placement of the nine-square Samadhi is in a circular lotus shaped pattern. The nine-square platform is accessed in four cardinal directions by pathways made in white composite tiles so that the floor does not get heated.

HINT: UPSC examiner lifted this description verbatim from PIB. It is the samadhi of Atal Bihari Vajpayee, called “Sadaiv Atal”.

Q. Which one of the following cities was named by UNESCO as World Capital of Architecture for 2020 ? (Asked in UPSC-NDA-2019-i)

HINT: UN Educational, Scientific, and Cultural Organization (UNESCO) has named the Brazilian city of Rio de Janeiro as the World Capital of Architecture for 2020. Rio defeated Paris and Melbourne, to become the first city to receive this title. Rio is famous for statue of Christ the Redeemer and Museum of Tomorrow.

HINT: New NCERT Class7: Abul Fazl helped Akbar in framing a vision of governance around the idea of sulh-i  kul so that he could govern a society composed of many religions,cultures and castes. Abul Fazl also wrote a three-volume history of Akbar’s reign, titled Akbar Nama.

From this information we can surmise that indeed both statements are correct and the second one explains the first.

HINT: During Governor General Amherst’s time this treaty was signed between Burma and Britishers (1826) at the end of the first Burmese War.. Very factual question with very close options. In real exam better to skip it if you do not know the exact answer. 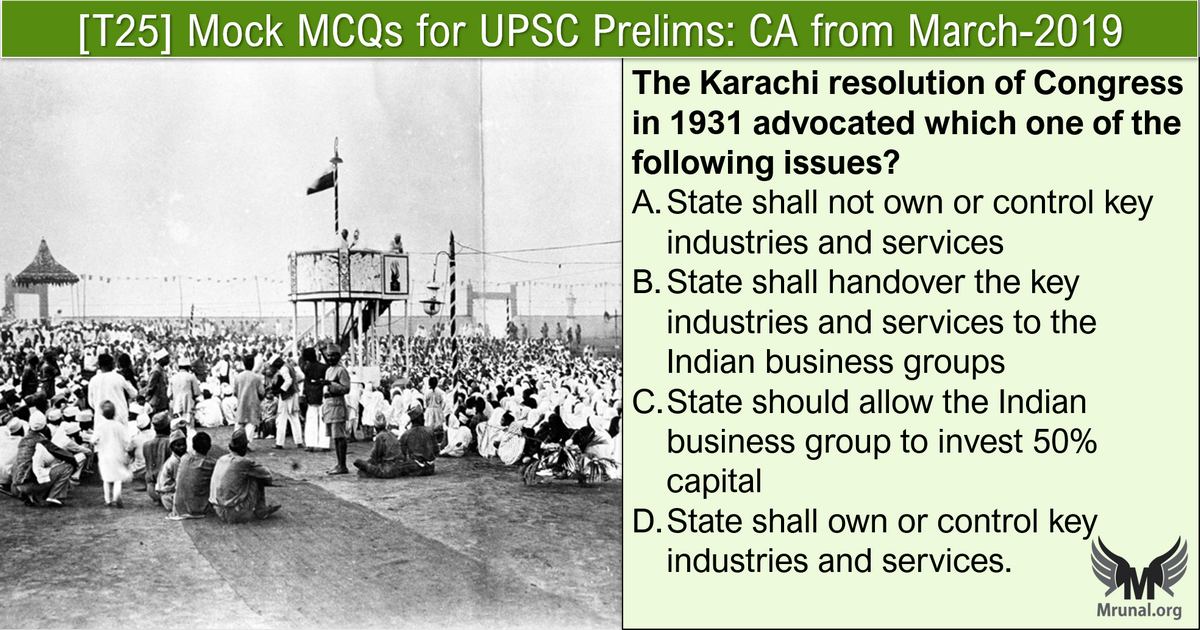 Q. The Karachi resolution of Congress in 1931 advocated which one of the following issues ? (Asked in UPSC-NDA-2019-i)

HINT: “C” is not making good sense. While Industrialist Motilal Nehru himself would have preferred A or B but by 1931 he’s getting overshadowed by the prominence of his Son who had soft corner for Socialism. So, by elimination that leaves “D” as the probable answer. But to confirm let’s check Bipan Chandra page 278: Karachi resolution:

Q. Who among the following historians have described the Quit India movement as a ‘spontaneous revolution’? (Asked in UPSC-NDA-2019-i)

HINT: Lifted from Sumit Sarkar’s book. “There has been relatively little detailed work so far on the Quit India Movement. General studies include Amba Prasad, Indian Revolt of 1942 (Delhi, 1958); L. Hutchins, Spontaneous Revolution (Delhi, 1971).” Very factual question with unknown historians. In real exam better to skip it if you do not know the exact answer / History is not your optional subject.

Statement I : The Kisan manifesto was adopted by the All India Kisan Sabha in August 1936 contained radical demands.

Statement II : The All India Kisan Sabha was a part of the Congress and maintained close relationship with the Provincial Congress Committees

HINT: Kisan Manifesto was prepared by Congress keeping the 1937 elections in mind. All India Kisan Sabha is a separate entity.

Statement I : The British ruled India through a modern bureaucracy headed by the Indian Civil Service, whose members were recruited through merit based on open competition.

Statement II : The Indian Civil Service was based on the wholehearted participation of Indians.

Q. The Azamgarh Proclamation of August 25, 1857 stressed on which one of the following issues? (Asked in UPSC-NDA-2019-i)

There were five sections in Azamgarh Proclamation 1857.

NDA-2019 had two questions on Gandhi perhaps because 2019 being his 150th anniversary.

HINT: Appears to be lifted from Ramchandra Guha tweet after releasing his new book – “Gandhi the years- That changed the world”. The Viceroy, Lord Willingdon, in a letter of 1933: ‘‘It’s a beautiful world if it wasn’t for Gandhi who is really a perfect nuisance”.

Q. Which Indian businessman favoured ‘healthy capitalism’ in helping Gandhiji to work towards a ‘common object’? (Asked in UPSC-NDA-2019-i)

HINT: Appears to be lifted from some random Google book. On August 1934, Birla wrote to Thakurdas, “Vallabhbhai, Raja Ji and Rajendra Babu all fighting Communism and socialism. It is therefore necessary that some of us who represent healthy capitalism should help Gandhiji as far as possible and work with common object.”

Gandhi used to stay at Birla house in Delhi. So one could make an association he should be the closest match. This question could have been made more difficult if they had given Motilal Nehru as one of the options!

2. It describes the quantity of energy released by a single earthquake

3. Richter Scale has no upper limit

Q. Which of the following is/are environmental effects of Rotation of the Earth? (Asked in UPSC-NDA-2019-i)

Q. What is the time gap in occurrence of two successive tides at a given place on the ocean surface ? (Asked in UPSC-NDA-2019-i)

HINT: NIOS page 147: the regular interval between two high tides or between two low tides is 12 hours and 25 minutes and not exactly 12 hours. Each day (in 24 hours) the high tide arrives about 51 minutes later than on the previous day. It is so because each day the rising and setting of the moon also falls behind by 51 minutes.

Q. Which one of the following can be said to be essentially related to “Polar Front Theory’? (Asked in UPSC-NDA-2019-i)

Q. “Inversion of Rainfall” is associated with (Asked in UPSC-NDA-2019-i)

HINT: According to google books, Precipitation inversion is found in some mountain areas, a decrease of precipitation with increasing elevation of ground above sea level, also known as rainfall inversion. So closely associated with orographic rainfall. Orographic rainfall on formed where air rises and cools because of a topographic barrier.

Q. Kamarajar Port was commissioned in 2001 to handle thermal coal requirements. It is situated along the coast of which Indian State ? (Asked in UPSC-NDA-2019-i)

Q. Which one of the following Union Territories of India is the smallest in terms of geographical area? (Asked in UPSC-NDA-2019-i)

Q. Brahmaputra and Indus rivers are antecedent rivers. Which one of the following may be the true definition of an antecedent drainage ? (Asked in UPSC-NDA-2019-i)

Q. Which one of the following rivers was earlier known as “Vitasta”? (Asked in UPSC-NDA-2019-i)

Q. River Sarda drains in the Northern Plains of Uttar Pradesh. Before entering in the Plains, Sarda is known (Asked in UPSC-NDA-2019-i)

HINT: NCERT: India’s Physical Environment Class 11 Page 26:  The river Sarda (Kali or Kali Ganga) joins it in the plain before it finally meets the Ganga at Chhapra.

Q. Which one of the following is NOT a west flowing river?

HINT: साला इतना डिटेल में कौन तैयार करता है!!?? that too all such small time obscure rivers! Anyways, as per Page 270 of Mahesh Barnwaal’s Bhugool: Brahmani, Pennar, Palar,Vaigai and Tamrapani are East flowing rivers and drain into Bay of Bengal. So that leaves us with D option. Factual question, in real exam better to skip If you have no idea about any of these rivers.

HINT: from LucentGK, Shamal is a warm and dry wind from the north or northwest in Iraq, Iran, and the Arabian Peninsula.