What is complimentary angles?

In the earlier article, we saw how to construct and memorize the trigonometry table for sin, cos, tan, cosec, sec and cot for 0, 30, 45, 60 and 90 degrees. Click me if you did not read it 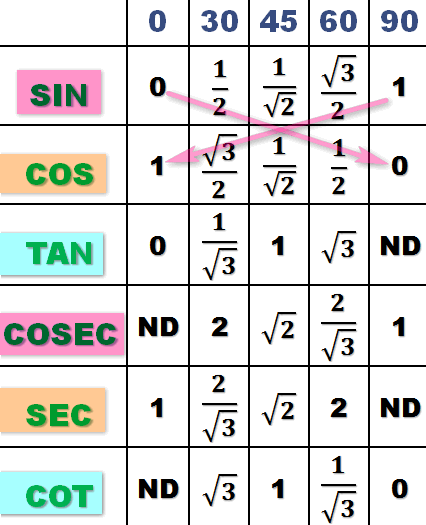 If you compare the rows of sin and cos. You’ll notice that

This generalization is true for all angles between 0 to 90 including 0 and 90.

=1 (because numerator and denominator are same so they’ll cancel eachother.)

But suppose if there is cos18+sin72, this doesn’t lead to any value. (because

In the exam, sin and cos’s complimentary concept usually doesnot help in multiplication or addition cases.

Point being: in the exam, after doing some steps, if you run into above situations, there is a chance that you’ve made some mistake in calculation or you’ve moved into the wrong direction. Although there can be exceptional situation where it could help, when they’ve framed equation using both trigonometry + algebraic equations (That is Type#4 questions, we’ll see about it in next article).

If you convert all four (sin, cos, cosec, and sec) into their complimentaries (cos, sin, sec and cosec) then you’ll run into infinite loop.

In the table, you can see that

So, tan and cot are complimentary

The tan and cot’s complimentary relationship is also import for multiplication chain questions because tan and cot are also inverse of each other. That is tan A x cot A= tan A x 1/tan A=1.

When you get this type multiplication chain question, you’ve to find out the pair of complimentary angles. Here 48 + 42=90 and 23 +67=90 so I’ll club them together

In both parts, we’ll convert any one tan into cot, then tan x cot = 1 (because they’re inverse of each other).

Let’s try another one

In each of those pairs, you convert one tan into its complimentary cot.

=1 because tan and cot are inverse of each other.

We know that in any triangle ABC, the sum of three angle A+B+C=always 180

Now back to our complimentary formulas. we already know that for angles between 0 to 90, sinX=cos(90-x) this is definitely correct. So instead of “x”, I’ll now write A/2

Putting that back in eq2

These complimentary are valid for acute angles (between 0 to 90) and some of them are not valid for 0 or 90 if they’re “not defined”.

For more articles on trigonometry and aptitude, visit Mrunal.org/aptitude