So, before we dwell into them, let’s take a technically incorrect example/ ”case-study” involving

DevAnand is a tourist guide. He can keep track of his business, like a normal middle class professional: income vs expenditure. But he decides to maintain accounts like the government.
Raju Guide’s Annual financial statement

Devanand is neither CA nor MBA(Finance). Nor he can afford to hire those professionals. Therefore, to keep things simple, Dev follows three jugaad principles to classify all the incoming and outgoing money:

Whatever money Dev earns within a year (and its recurring in nature- meaning next year also, he’ll earn from the same sources). We can see this Ganga, gets water from two smaller tributaries:

This river gets money from various smaller streams:

#1: Income from direct sale of goods/services

^since he gets this money every year(=short term), and it is in recurring nature (because he’ll earn it every year)=> therefore, we’ll write this on left hand side of table (Revenue part).

Since he’ll earn these (dividend, interest, profit) on yearly basis = short term = revenue side (left hand side of the table). now let’s update

here, we focus on the short term expenditure (occurring on daily, monthly or yearly basis)

We learned DevAnand earns money (non-tax revenue receipt) by selling goods(books, souvenirs) and services (as a tourist guide). but for that also, Dev has to incur some expenditure, such as:

These are all “Short-term” Expenditures- re-occurring on daily/monthly/yearly basis. Therefore we put’em under Revenue Expenditure (and not under capital Expenditure.)

this pretty much sums up the Revenue part.

= difference between the incoming and outgoing money in revenue part.

We’re done with left hand side of the table (Revenue part), now time for the right hand part (capital)

As per DevAnand’s jugaad principle for “finance and accounting”:

How is the different from the “input cost on raw material”? (buying sugar/milk/tea powder)

*we’ve already covered them in previous article. click me 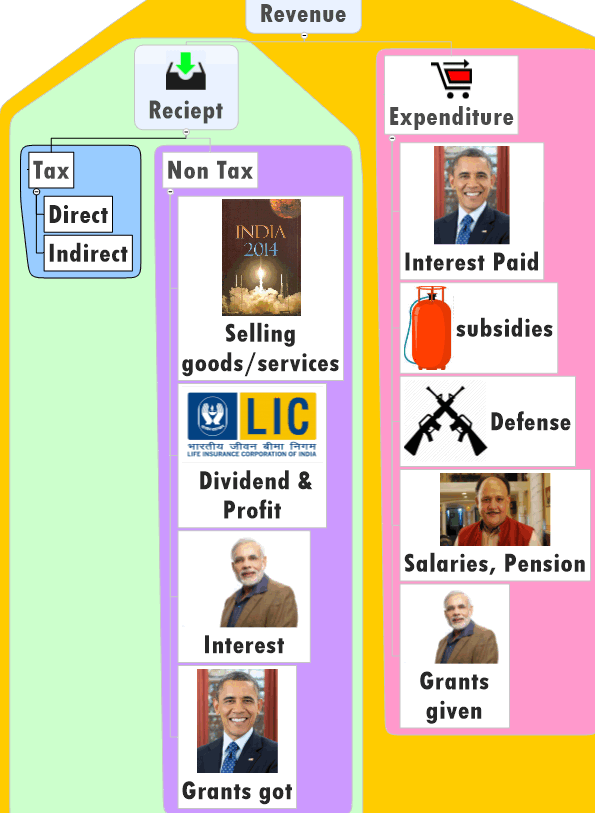 #1: by providing goods and services

In Dev’s case, we listed such (non-tax) income as “selling goods/services”. but government feels “shy” about admitting that they “sell” goods/services. Therefore, in Government’s annual financial statement, all such income is listed as “Other receipts” or “Other sources”. Anyways, let’s update the table

For the MCQs, we need to know which source brings maximum non-tax revenue.

for BE2014 (that is 2014-15), he doesn’t plan to fetch large dividend from PSU (if he extracts large dividends from PSUs every year, they’ll be left with no money for business-expansion.) Anyways for

so far, we are done with budget => revenue part=> incoming.

Now, it’s the time for

Overall, we can summarize it under

But in the annual financial statement, they put these things in a more refine manner. Let’s observe:

Numbers are not important. I’ve already arranged them in descending order. The top five are:

Sidenote: if railway budget was not presented separately, then railway Expenditure would also be counted under this “Revenue Expenditure”. (Just like we’ve done with Postal dept.)

This is the difference between outgoing and incoming money in Revenue part.

(You can also write it as Revenue receipt minus revenue Expenditure, in that cse you’ll get answer in Negatives sign).

What is the MCQ wisdom here?

How did chindu manage to reduce the revenue deficit?

Let’s focus only on the revenue part of budget:

From the first article, you know that direct-indirect taxes did not bring expected amount of cash. In fact, there was shortfall of ~77k crore rupees because of inflation and policy paralysis.

So obviously, Chindu could have succeed in cutting down the Revenue deficit by only two ways

#1: increase in the non-tax income

recall that, when government sells goods/services and earns money=> they call it “other receipts”. Spectrum auction money also count under other reciepts.

How much did Chindu earn more than expected?

Wait, I just said government fetched ~18k crore through spectrum auction. Then why does it show only 2k here?

Observe that in revised estimate (RE) he got (88k-74k)=~14k crores higher than expected.

Wait a minute, I just said 15k from coal India, then why is it only ~14k higher than expected? Because in BE2013 also, Chindu would have estimated that 8-10k crore from coal India dividend. it’s not like entire 15k crore came as “surprise”.

What about disinvestment? That counts under capital part. So ignore here. We’ll see in next article.

Although on the other hand, some Expenditure increased because of

But overall, net impact is: revenue deficit lower than his original budget estimate.

Why Percentages did not change?

How is this possible? Classic principle of data interpretation! Observe:

You can see, he barely increased the subsidy allocation by ~200 crore rupees. So, again, subsides unlikely to have negative impact. (as an “absolute number” 2.5 lakh crore is very high, but the relative change is very small- just ~200 crore).

Speaking of subsidies, you might be wondering, “Where does the plan and non-plan expenditure fall?”. It falls in the chart shown below

^this is just a preview, we’ll see about Subsidies, plan vs non-plan in detail, in a separate article later.

But overall, Chindu has played his cards appropriately- since it was an interim budget, he did not announce major changes in tax, schemes and and subsidies. Therefore, 3% revenue deficit target should not be hard to achieve, unless

we know that Revenue deficit = difference between incoming vs outgoing Revenue. overall, the components were….

Observe the last phrase: “Grants given to State/UT.”

**technically speaking, under FRBM act, grants given to following count

As long as they’re for creation of “Capital assets”. Anyway, let’s check data: numbers not important, only given to display the formula in action.

This ends the “Revenue” part of the budget. (both incoming vs Outgoing).

In the next article, we’ll see