Feb 2014: Government approved two extra attempt for all categories in IAS/IPS exam (click me). But that notification was creating some confusion.

March 2014: now Department of Personnel and training (DoPT) issued a separate circular to elaborate the matter further. click me for the circular

Moral of that story circular is following:

These are not given in the official circular, but frequently asked by readers. So I’m replying these based on the previous trend/system/rules of UPSC.

Q. what about IFoS exam?

Ans. No. This relaxation only applies to Civil service exam (IAS/IPS).

Forest service (IFoS) is a separate exam- its age/attempt limit is counted separately. Only the preliminary exam of IAS and IFoS are common. Therefore, we should continue assuming that IFoS age/attempt=old system remains. (unless UPSC notification changes it on 17th May 2014.)

Q. What about JK residents and Ex-Servicemen?

Ans. Since the circular is silent about them. We can assume the old system continues for them. However, every JK and Ex-serviceman can also be classified under Gen/OBC/SC-ST/PH. and therefore benefits / gets hurts accordingly (depends on how UPSC interprets it!). For example:

I believe in view point #1. Let’s wait for the notification on 17th May.

Q. What counts as attempt?

Q. When is the age counted? 1st August or 1st January?

Ans. I don’t know. And RTI is unlikely to reveal anything. Most likely the DoPT and UPSC will reply that “CPIO cannot predict the future course of action.”

Anyways, official notification of UPSC, will come on 17th May 2015. Hopefully that should throw some light. [This scenario is similar to optional subjects- no one knows when it’ll be removed from the mains exam, we can only come up with conspiracy theories.]

How/why? Well observe the following screenshot of 2013’s application form. The UPSC form is designed in such way that creamy layer has to tick “General” category. 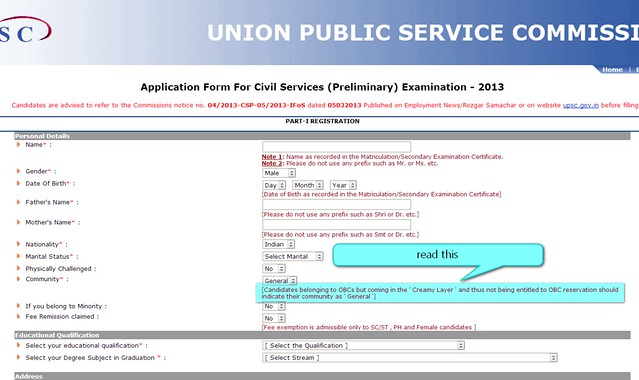 Q. I had applied as general category in xyz year’s exam. But for 2014, I want to apply as OBC/SC/ST candidate. Is this permissible?

Q. This week (March 2014), cabinet cleared the file. So it’ll take some weeks before gazette notification is released. Only after that, local tehsildar/SDM/collector office will start issuing certificates. Can I claim reservation in in UPSC?

(quoting UPSC notification from 2013): There may be a few cases where there was a little gap (say 2-3 months) between the issuance of a Government Notification enlisting a particular community in the list of any of the reserved communities and the date of submission of the application by the candidate. In such cases the request of change of community from general to reserved may be considered by the Commission on merit. In case of a candidate unfortunately becoming physically disabled during the course of the examination, the candidate should produce valid documents to enable the Commission to take a decision in the matter on merit.

Meaning only the (non-creamy layer) Jats of those states will get OBC age/attempt benefit.

A Jat candidate, who originally belongs to Madhya Pradesh but currently living in Delhi for last few months, to study in a coaching class. = No, he doesn’t get OBC reservation UNLESS he can prove that he is a domicile of Delhi. Meaning, he needs to show birth certificate, proof-of-resident/ration card/lightbill/phone bill etc.

If I recall correctly, Delhi sarkaar wants domicile proof that you/your parents are living in Delhi since 1993, only then you can get OBC certificate.

Moral of the story: you must have two certificates.

Moving to the next topics:

#2 and #3 are based on RTI reply filed by Mr.Prashant Kumar.

Q1. Can an engineer from Computer Science/Information technology eligible to sit in the exam? if yes, then under which subject (out of the four available) they may apply?

Q2. if a computer science candidate gets selected in another subject (Electrical, etc) is there any preference given to the Electrical candidate or all must be considered equal?

UPSC replies for Q1 and Q2:

Q3. Is there any provision or discussion over inclusion of Computer Science/ IT as one of the subjects in Engineering Service Exam in the coming years?

Query is hypothetical in nature and hence does not qualify as information as defined under section 2/F of the RTI act, 2005

Q4. What is the total time from Pre-Exam to Joining for a candidate in Engineering Service?

there is no such specific timeframe between the conduct of exam and joining of the candidate. It varies from year to year

Q5. How many Computer Science/IT students have applied and got selected in Engineering Service Exam 2011 and 2012?

The information regarding the qualification of candidates is neither compiled nor maintained in the manner asked for in the application. As such the information cannot be provided.

Q1. Please provide the cutoff marks for all categories in the NDA 2013 exam?

Q2. Is the NDA cutoff paper-wise or overall?

UPSC replies: There is no separate paper wise cutoff in this exam.