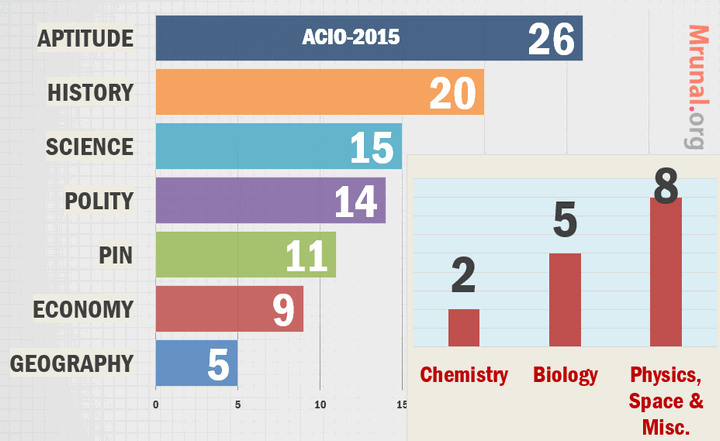 1. Curcuma longa is the scientific name of which spice?

2. Bones found in the hands and feet as the percentage of total number of bones in the body of an adult human being is nearly equal to

3. Europeans are believed to have brought potatoes to India in the 18th century. Which region of the world is believed to be the origin of potato cultivation?

Although, Portuguese brought it to India but Potato is originally from Southern Peru Says China’s official Educational Research site

5. Which gland in the human body is also known as the third eye

6. Leukaemia is a group of cancers that usually begins it the bone marrow and results in high numbers of which abnormal cells

8. On a cool day in January, the temperature at a place fell below the freezing point and was recorded as -40Â° Centigrade. }n Fahrenheit scale, the same temperature would be

9. Universal Gas Constant, R, is a property of?

63. In Alternating Current (AC), the direction and magnitude of the current varies

64. Albert Einstein received the Nobel Prize for Physics in the year 1921 for his work on

65. Sir C.V.Raman received the Nobel Prize for Physics in the year 1930 for his ground breaking work in the field of

It was held at Kolkata says the Official page of Science Congress.

14. Homi Jahangir Bhabha, the father of Indian nuclear programme, was also the founding director of which of the following institutes?

15. Who headed the Satellite Launch Vehicle (SLV) project launched by ISRO in 1970? (SLV)

Dr.Kalam was the director in 1970 for this project says theBusinessline Newspaper.

17. The BrahMos, a short range supersonic cruise missile, is a joint venture between which foreign country and Indian agency?

DRDO and Russia says the official site of Brahmos.

This concludes the Science answerkeys, now moving to next segment:

66. Which of the following Indian nationals has been the recipient of Ramon Magsaysay Award for Community Leadership

Swaminathan won it for community leadership. says this google book.

68. In which individual event, the 1st Olympic medal for Independent India was won at Helsinki Olympics?

76. Till date, 13 serving Heads of State have received Nobel Peace Prize. Only one Head of State received it for Literature. Who was he?

Churchill received it for Literature. says the official webpage for Nobel Prizes.

81. Suzanna Arundhati Roy, an Indian author and political activist, was born in

She was born in Shilong says britannica.com

84. In which subject did Dr Bhabendra Nath Saikia, famous novelist and film director of Assam, obtain PhD from University of London?

He had done Ph.D in Physics. says this Assam info page

88. Charlie Hebdo, the French satirical weekly, first appeared in 1970 as a successor to another French magazine that was banned for mocking the death of former French President Charles de Gaulle. What was the name of the banned magazine?

67. Which of the following awards Satyajit Ray received posthumously?

He got Bharat Ratna Posthumously in 1992 Lucent GK page608

89. Vasant Govarikar, who passed away recently, was a famous personality in which field?

39. A scene of wrestling match in Bombay’s Hanging Gardens was shot by Harishchandra Bhatwadekar, & it became India’s first movie. It was shot in the year

1896. Although doubtful because different sites give different years.

45. In which year, Thums Up, one of India’s great brands, which was sold to Coca-Cola a few years ago, was launched?

It was published in the year 1936 says NCERT Class10 India and contemporary world, Ch8 Novels, Society and History.
Visit Mrunal.org/ACIO for more about job profile, training and interview-experiences (posted in the comment sections of old articles).