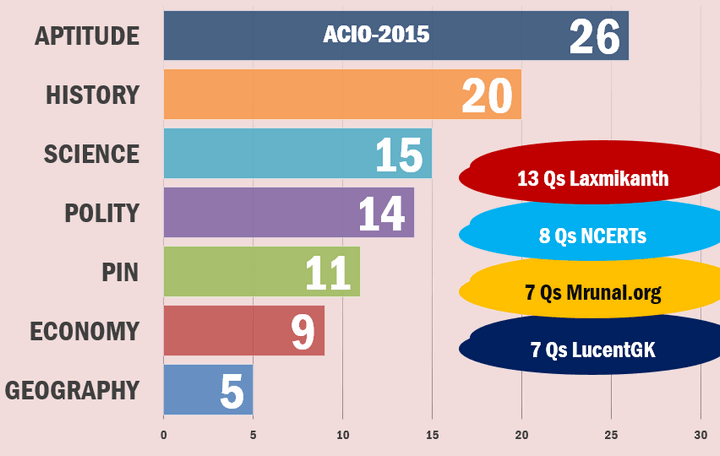 Answer is #1 Mrunal’s article on NITI AAYOG. Infact it even had similar question mock-question about expanding the term “NITI”. This body was officially setup in January 2015, and the ACIO Exam was conducted in February 2015, hence previous budget and upto last one month’s current affairs, should be prepared for future exam.

69. The Gini Coefficient is a measure of

70. Which of the following indices is not considered while calculating Human Development Index (HDI)?

Housing not included in computation of HDI. Mrunal’s article on Economic Survey Ch13.

71. For the financial year 2013-14, what percentage of total tax receipts of the Union Government came from income tax collections?

0.35% as per Planning commission report.

73. As per Census 2011 data, which is the most populated metro city in India?

74. As per Census 2011 data, which among the following States has higher sex ratio than the national average?

82. Yellow Revolution in India refers to growth of

Q4. Oymyakon is generally considered the coldest inhabited area on Earth. Which country Oymyakon is located in?

This place is located in Russia Therefore, answer is #2. says Dailymail UK

Q7.During an earthquake, two places ‘A’ and ‘B’ record its intensity in Richter scale as 4.0 and 6.0 respectively. IN absolute terms, the ratio of intensity of the earthquake at ‘A’ to that of ‘B’ is:

Q78.Which among the following is the oldest mountain range in India?

Aravali is the oldest mountain range of the world and oldest among India’s mountain ranges. It emerged during Archaean era. Therefore, answer is #2. (India: comprehensive geography D.H. Khullar, chap 3: Physiography.)

Ans. Naramda flows from East to West and ends in the Arabian Sea, Hence answer is #1. Refer to Map 3.4 in NCERT Class9 Chapter 3, page 19.

Q80.Which of the following national parks of India is located in one of the north-eastern states? It is also a declared UNESCO world-heritage site

Answer is #3, Manas Valley, as per UNESCO’s official list of natural heritage sites in India

Visit Mrunal.org/ACIO for more about job profile, training and interview-experiences (posted in the comment sections of old articles).