Both are uploaded in high-resolution PDF files. MCQ Paper contains no markings. 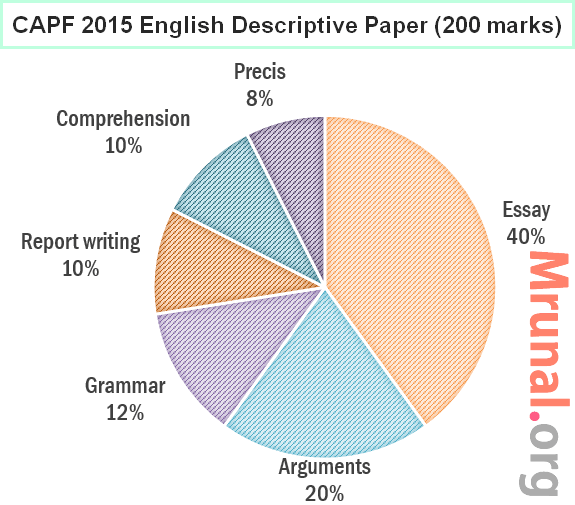 Please read each of the following instructions carefully before attempting questions. All the SIX questions are to be attempted.

Q4. Attempt a précis of the given passage in one-third of its length. Do not suggest a title. Write the précis, as far as possible, in your own words. State the number of words at the end answer. Write the précis on the separate sheets provided and fasten them to the answer book. (15)

There is a fatal imbalance between what man is and what he wishes to be. This discord is responsible for our unrest. We talk like wise men but act like lunatics. We cannot prepare for war and at the same time for a world community. We are tormented by inner uneasiness and pangs of conscience. The warring sides of our nature require to be reconciled. If we are to defeat fratricidal tendencies in us, we must break our self-will, the pride of egoism which is widespread in all sides of our life. In man there is always an urge to self-transcendence, but until it becomes absolute unselfishness, narrow loyalties and destructive rivalries will prevail. The unrest in the world is a reflection of our inner disharmony.

A people are saved not by their military leaders or industrial magnates, or by their priests and politicians, but by their saints of implacable integrity. Religion is the discipline by which we are helped to overcome the discord in our nature and integrate our personality. If we reflect on the history of religious development, we will be surprised at the amount of intellectual ingenuity, passion and zeal spent on the task of defining the Supreme to which silence or poetry would seem to be the most appropriate response. Self-righteousness breeds fanaticism. None but fools and fanatics are quite certain of their views of God. With crusaders there is no arguing.

Before God there is neither Greek nor barbarian, neither rich nor poor, neither master nor slave. They are all citizens of the commonwealth, members of one family. A truly religious person cannot hold back but should lead. He cannot remain silent when he should speak up. He should not compromise when he should stand fast. Ethical values have relevance to social facts. We must face up to the ugly facts of sin, pride and greed. Human nature is essentially good and it is opposed to tyranny, injustice and authoritarianism. Religion appeals to the hearts of men to root out fear, guilt and faith in force.

The tradition of tolerance, not merely in a negative, but in a positive sense, that is an appreciation of other faiths, has been with us for centuries. Tolerance is not apathy, but is conviction without condescension. Aggressiveness is not an essential part of human nature. Combativeness can be replaced by meekness and gentleness. The Cross indicates that the love which suffers is more powerful than the force which inflicts suffering. (413 words)

Q5. Read the following passage and answer the questions that follow- ( 5×4=20)

The most prominent obstacle to cultural unity is the variety of languages. When told that there are fourteen regional languages and many more dialects belonging to four different linguistic families in India, foreigners are inclined to think that Indians are not one people but, like the inhabitants of Europe, a motley group of peoples with different cultures showing some common elements. There can be no doubt that on account of linguistic barriers, people from different parts of India generally meet as comparative strangers on all levels other than the religious one. Unless he happens to know English or Hindi, a man from the non-Hindi speaking regions finds it extremely difficult to make himself understood outside his own linguistic area. No doubt if he spends some ‘time in a new place, he can pick up enough of the local language to get along but in spite of a common background of religious beliefs and thought in general, he cannot come in intimate contact with the people around him because there is no common medium for the exchange of deeper thoughts. So until there is a link language and it is known throughout the country, an effective cultural unity is not possible.

But more variety of languages could not be a positive danger to the unity of India if it were not accompanied by linguistic communalism amounting in many cases to chauvinism. It is this poison in our social organism that makes the movement for linguistic states, which is perfectly justified on rational, historical and practical grounds, an object of great concern to all who have the good of the country at heart.

To avoid any misunderstanding we should make it clear what we understand by the term “linguistic communalism”. The consciousness of a group of people speaking the same language that makes them form a distinct community is natural and legitimate. But if it is associated with the feeling that those sons of the country living in the same area or an adjacent area who speak a different language are outsiders in the worst sense of the term and should be treated as such, then it assumes the ugly shape of linguistic communalism which is harmful to national unity and is highly objectionable. Far more harmful and objectionable, however, is the tendency in a linguistic majority to withhold from the minority the safeguards guaranteed by the Constitution for preserving and promoting its language and culture, including the primary education of its children through the medium of the mother tongue, or to discriminate against individual members of the minority in state services and other matters. It is this chauvinism, unfortunately present in India, which has created a painful situation after the states were reorganized on a linguistic basis, the cultural and other rights of linguistic minorities in each state have been disregarded in many cases. So when the question of redefining the boundaries of linguistic states comes up for consideration one finds the worst tensions and conflicts in the border areas where each of two or more language groups agitates for the inclusion, of the area of its domicile in the state where its own mother tongue would be the official language. If groups living in each border area could be assured that to whichever state the area went they would all receive equal treatment and their constitutional rights would be safeguarded, a major difficulty besetting the problem of linguistic states would be removed.

6. (A) Rewrite the sentences as directed making necessary changes without changing their meanings- ( 10×1=10)

(B) Use the following words in sentences of your own so as to bring out their meanings: 5×2=10