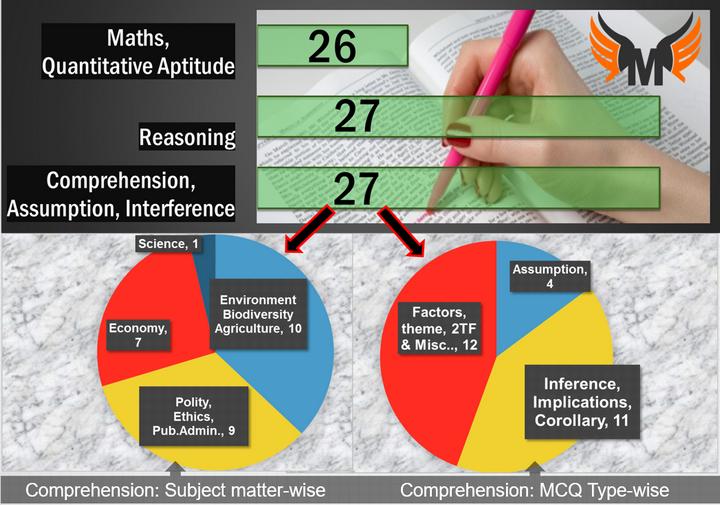 Besides, even in banking sector officer level exams, the passages are getting longer / tougher. So time and energy spent in preparation of this topic, is not going in vain, if you’re planning for banking sector as a career backup.

Not every passage will contain both for and against arguments. But in future, if UPSC starts asking new variety of MCQ e.g. “which of the following statements will strengthen or weaken the author’s position etc.”, then manually you’ll have to test it by putting them in t-diagram.

What is Corollary?
Ans. It’s an inference that follows directly from the proof of another proposition.
Ref: Nishith Sinha’s CAT Reasoning Book, page 4.4

We are witnessing a dangerous dwindling of biodiversity in our food supply. The green revolution is a mixed blessing. Over time farmers have come to rely heavily on broadly adapted, high yield crops to the exclusion of varieties adapted to the local conditions. Mono-cropping vast fields with the same genetically uniform seeds helps boost yield and meet immediate hunger needs. Yet high-yield varieties are also genetically weaker crops that require expensive chemical fertilizers and toxic pesticides. In our focus on increasing the amount of food we produce today, we have accidentally put ourselves at risk for food shortages in future.
Let’s make t-diagram first

25. Which among the following is the most logical and critical inference that can be made from the above passage?

Climate adaptation may be rendered ineffective if policies are not designed in the context of other development concerns. For instance, a comprehensive strategy that seeks to improve food security in the context of climate change may include a set of coordinated measures related to agricultural extension, crop diversification, integrated water and pest management and agricultural information series. Some of these measures may have to do with climate changes and others with economic development.

42. What is the most logical and rational inference that can be made from the above passage?

Understanding of the role of biodiversity in the hydrological cycle enables better policy-making. The term biodiversity refers to the variety of plants, animals, microorganisms, and the ecosystems in which they occur. Water and biodiversity are interdependent. In reality, the hydrological cycle decides how biodiversity functions. In turn, vegetation and soil drive the movement of water. Every glass of water we drink has, at least in part, passed through fish, trees, bacteria, soil and other organisms. Passing through these ecosystems, it is cleansed and made fit for consumption. The supply of water is a critical service that the environment provides.

43. Which among the following is the most critical inference that can be made from the above passage ?

To understand the nature and quantity of Government proper for man, it is necessary to attend to his character. As nature created him for social life, she fitted him for the station she intended. In all cases she made his natural wants greater than his individual powers. No one man is capable, without the aid of society, of supplying his own wants; and those wants, acting upon every individual, impel the whole of them into society.

46. Which among the following is the most logical and rational inference that can be made from the above passage?

About 15% global GHG emissions come from agricultural practices. This includes nitrous oxide fertilizers; methane from livestock, rice production, and manure storage; and carbon dioxide (CO2) from burning biomass, but this excludes CO2 emissions from soil management practices, Savannah burning and deforestation. Forestry, land-use, and land-use change account for another 17 percent of greenhouse gas emissions each year, three quarters of which come from tropical deforestation. The remainder is largely from draining and burning tropical peatland. About the same amount of carbon is stored in the world’s peatlands as is stored in the Amazon rainforest.

48. Which among the following is the most logical and rational inference that can be made from the above passage?

As we look to 2050, when we will need to feed two billion more people, the question of “Which diet is best?” has taken on new urgency. The foods we choose to eat in the coming decades will have dramatic ramifications for the planet. Simply put, a diet that revolves around meat and dairy a way of eating that is on the rise throughout the developing. world, will take a greater toll on the world’s resources than one that revolves around unrefined grains, nuts, fruits and vegetables.
Let’s make t-diagram

64. What is the critical message conveyed by the above passage?

“The conceptual difficulties in National Income comparisons between underdeveloped and industrialized countries are particularly serious because a part of the national output in various underdeveloped countries is produced without passing through the commercial channels.”

66. In the above statement, the author implies that:

PS: According to Merriam-Webster dictionary, imply and infer are synomonyms hence we needn’t change strategy.

All humans digest mother’s milk as infants, but until cattle began being domesticated 10,000 years ago, children once weaned no longer needed to digest milk. As a result, they stopped making the enzyme lactase, which breaks down the sugar lactose into simple sugars. After humans began herding cattle, it became tremendously advantageous to digest milk, and lactose tolerance evolved independently among cattle herders in Europe, the middle East and Africa. Groups not dependant on cattle, such as the Chinese and Thai, remain lactose intolerant.

65. Which among the following is the most logical assumption that can be made from the above passage?
MIND IT!! You’ve to find assumption, not inference. While finding assumption, we must keep two things in MIND:

In the last decade, the banking sector has been restructured with a high degree of automation and products that mainly serve middle-class and upper middle-class society. Today there is need for a new agenda for the banking and non-banking financial services that does not exclude the common man.

44. Which one of the following is the message that is essentially implied in the above passage?
(a) Need for more automation and more products of bank
(b) Need for a radical restructuring of our entire public finance system
(c) Need to integrate banking and non-banking institutions
(d) Need to promote financial inclusion

67. Which among the following is the most logical corollary to the above passage ?
We’ll go by Nishith Sinha’s CAT definition: Corollary = inference.

By killing transparency and competition, crony capitalism is harmful to free enterprise, opportunity and economic growth. Crony capitalism, where rich and the influential are alleged to have received land and natural resources and various licenses in return for payoffs to venal politicians, is now a major issue to be tackled. One of the greatest dangers to growth of developing economies like India is the middle-income where crony capitalism creates oligarchies that slow down the growth.

41. Which among the following is the most logical corollary to the above passage ?

Safe and sustainable sanitation in slums has immeasurable benefits to  women and girls in terms of their health, safety, privacy and dignity. However, women do not feature in most of the schemes and policies on urban sanitation. The fact that even now the manual scavenging exists, ones to show that not enough has been done to promote pour-flush toilets and discontinue the  use of dry latrines. A more sustained and rigorous campaign needs to be launched towards the right to sanitation on a very large scale. This should primarily focus on the abolition of manual scavenging.
45. With reference to the above passage, consider the following statements:

The nature of the legal imperatives in any given state corresponds to the effective demands that state encounters, and that these, in their turn, depend, in a general way, upon the manner in which economic power is distributed in the society which the state controls.
47. The statement refers to:
(a) the antithesis of Politics and Economics
(b) the interrelationship of Politics and Economics
(c) the predominance of Economics over Politics
(d) the predominance of Politics over Economics

Let’s arrange sequence
This is a statement given by Harold Laski.

Answer following questions:
1. According to the passage, which of the following factor/factors led to the adverse consequences for governance/public administration?
1. Inability of civil services to strike a balance between internal and external accountabilities
2. Lack of sufficient professional training to the officers of All India Services
3. Lack of proper service benefits in civil services
4. Lack of Constitutional provisions to define the respective roles of professional civil services vis-a-vis political executive in this context
Select the correct answer using the code given below :
(a) 1 only
(b) 2 and 3 only
(c) 1 and 4 only
(d) 2, 3 and 4

Assumption + Premise = Conclusion. If we take correct assumption as negative, then entire passage will nullify. Let’s put both statements to this test:

3. Which one of the following is the essential message implied by this passage?
(a) Civil services are not accountable to the society they are serving.
(b) Educated and enlightened persons are not taking up political leadership.
(c) The framers of the Constitution did not envisage the problems being encountered by the civil services.
(d) There is a need and scope for reforms to improve the accountability of civil services
Read paragraph sentence 2 and 4. Answer is D

4. According to the passage, which one of the following is not a means of enhancing internal accountability of civil services?
(a) Better job security and safeguards
(b) Supervision by Central Vigilance Commission
(c) Judicial review of executive decisions
(d) Seeking accountability through enhanced participation by people in decision making process
Read para. sentence 5 and 6. Thereby A, B and C fits. Hence “D” is not meant for increasing internal accountability.

5. With reference to the passage, the following assumptions have been made :
Negative of true assumption will make the passage/premise will become invalid. Let’s check.

6. Which one of the following is the crux of this passage?

21. What is/are the present constraint/constraints in using biomass as fuel for power generation?

22. Which of the following can lead to food security problem?

23. In the context of using biomass, which of the following is/are the characteristic/characteristics of the sustainable production of biofuel?

24. With reference to the passage, following assumptions have been made :

68. According to the above passage, which of, the following are the fundamental solutions for the world food security problem?

69. According to the above passage, the biggest challenge to world agriculture is:
(a) to find sufficient land for agriculture and to expand food processing industries
(b) to eradicate hunger in underdeveloped countries
(c) to achieve a balance between the production of food and non-food items
(d) to achieve a balance between demand for and supply of  food

Ref para sentence 1, 5, 6- they all hint about the challenge of supply and demand mismatch.
As such even “B” may look tempting, but since para sentence 1 verbatim gives “D” statement. So we’ve to go with “D”.

70. According to the above passage, which of the following helps/help in reducing hunger and starvation in the developing economies ?

71. The issue of worldwide supply of food has gained importance mainly because of:

Answer could be either “B” or “D”. UPSC official answer key will be the final judge.