“For achieving the desired objectives, it is necessary to ensure that the regulatory institutions remain independent and autonomous.” Examine critically in the light of the experiences in recent past.

Brainstorming for the points:

This question was asked in UPSC Mains 2015. and this article in EPW can pretty much covers the entire theory and all the issues. Anyways, let’s start brainstorming: 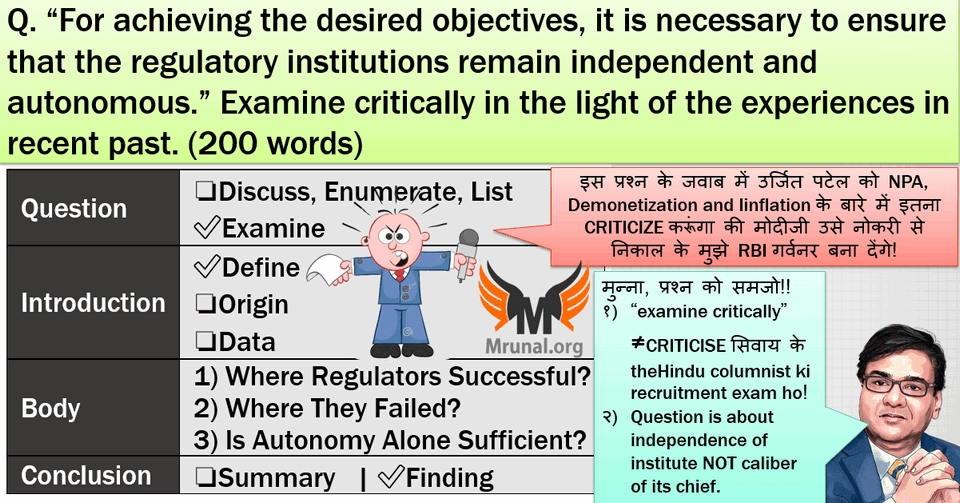 So, better approach it from following angles and sequence in body:

If you brainstorm further, you can cite issues related to sports regulator, news channel regulator and so on. But you’ve to write a GS answer not a research paper. Even fitting these many points within 200 words, will be a challenge so let’s begin!

Introduction of the Answer

While regulators enjoy functional independence, they still fall within the broad domain of the executive branch of the state, which makes them susceptible to the pressure groups and corporate lobbying.

Body#3: Area where regulators need to be autonomous:

Since question asked you to “examine critically”, so the conclusion has to be “finding” type:

This is ~550 words. So we’ve to compress to reach the prescribed word limit.

Question: “For achieving the desired objectives, it is necessary to ensure that the regulatory institutions remain independent and autonomous.” Examine critically in the light of the experiences in recent past. (200 words)

Answer
(Introduction: Definition | Origin | Data)
Regulatory body is an organizations set up by the Government to monitor, guide and control a particular sector such as banking, insurance, higher education or healthcare.

Conclusion (Summary | Finding)
In the post-1991 India, majority of the regulators have been successfully carrying out the tasks entrusted to them, and where they’ve failed- the causes range from corrupt individuals & political interference to infrastructural & procedural bottlenecks. Hence need of the hour is to initiate proactive reforms for their independence, autonomy and capacity building.