Answer Following in 200 words each: 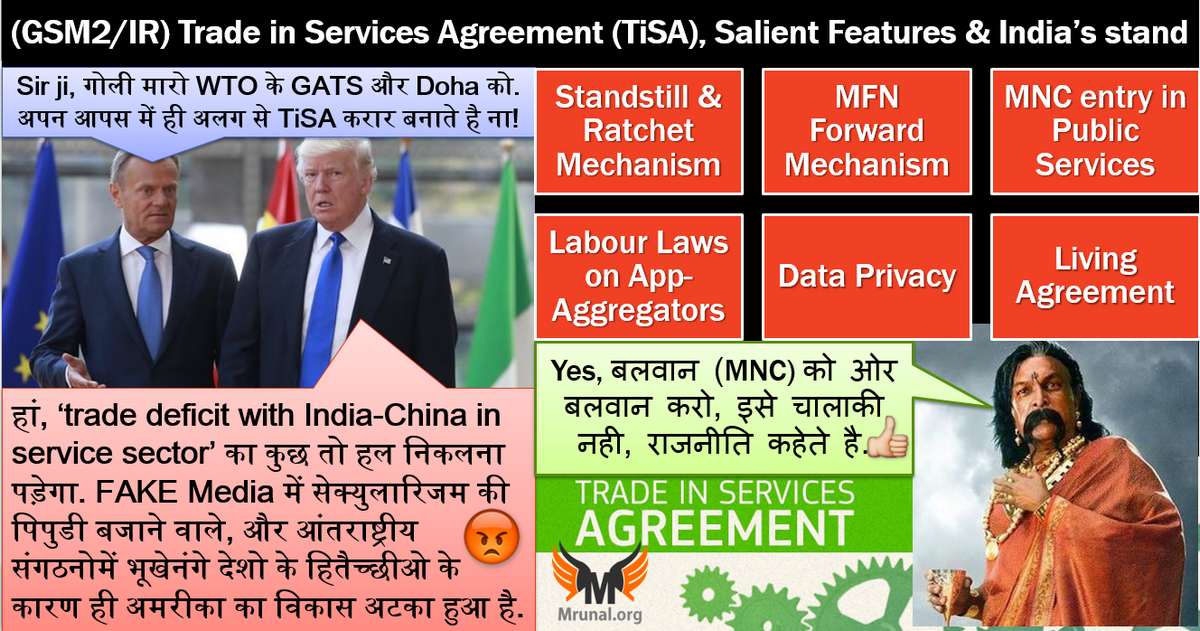 TISA classifies services according to four modes of ‘supply’, and aim to reduce barriers in their international trade:

“TISA’s provisions vs India’s stand” can be summerized in a few lines. But here I’m giving elaborate descriptions since they’ll also come handy as fodder points for Essays related to Global Economy and Mecantalism in the Modern Age, MNCs, Data Privacy, Efficiency in Services Delivery etc.

President Trump has already pulled out of Trans Pacific Partnership (TPP) agreement. Experts opine that he favours bilateral agreements over multilateral / regional agreements. Because in bilateral agreement he can get more concessions by asserting US power one-on-one against other countries. Hence three scenarios are possible:

Q1 asks you to ‘elaborate’. So, it is a ‘discuss’ type question, hence conclusion should be summary type. Let’s make:

WTO is setup for not only removing the barriers to international trade, but also to ensure that developing countries and LDC benefit fully from the global trading system. With the rise of economic and diplomatic strength of India, China and other emerging economies, it’s expected that WTO forum becomes more receptive to their demands, sometimes resulting into delays to arrive at a decisions.
Hence, developed nations have been trying to sidestep WTO and fast-track their agendas with non-WTO mechanisms such as TPP, TATIP and TISA.

Q2 and Q3 asked you to examine / explain India’s stand. So it conclusion should be finding type. Let’s make:

It’s true that international trade in services faces many tariff and non-tariff barriers, but those issues need to be addressed by amending WTO’s GATS agreement, rather than creating non-WTO mechanisms spearheaded by developed nations and their corporate lobbyists. Because, such mechanisms will not give adequate voice to developing and least developed nations. Therefore, India sides with WTO supervised trade negotiations, over TISA, TPP and TATIP.