__ crops are the plants developed by ____ to take advantage of certain traits and get rid of less advantageous traits.

Now Fill in the blanks:

I’ve copied these factors from NCERTs only. No point in further Internet Research and PHD-giri over it. This much content sufficient for descriptive exams.

You may google ’crop specific’ criticism that
BT-cotton could have x problem
BT-brinjal could have y problem
GM-mustard could have z problem. Watch my Lecture
But ultimately most of them will boil down to above three category generic points only. So as long as you can manage with the generics, don’t waste time in memorizing specifics for mains. 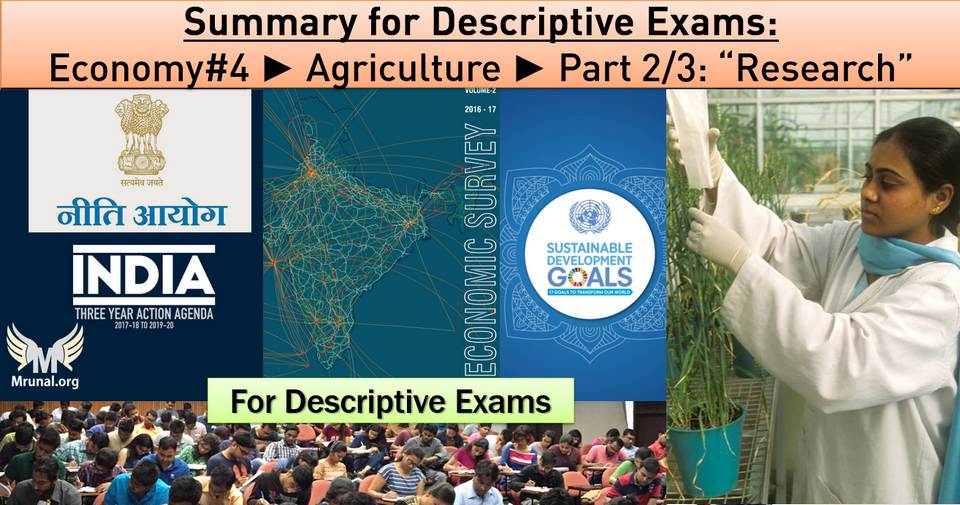 Upto above points, you can even reuse for medical / IT research related questions! Now let’s get to specific agriculture research problems:

Usually there are five types of delivery channels for agri-extension services:

For more on (GS3) E-Technology in Aid of Farmers Watch My Lecture on this Link
At district/field level following entities are responsible for extension services:

Years are not important, but I’ve given them just to give you a chronological perspective:

So in the 70s, rural / farm centric reforms were prominent, just like GST, Demonetization and “magnificent targets for cleanliness, housing, electricity, farm-income etc. @ 2019 & 2022” are prominent in today’s India.

If you’ve to write an essay on post-independent India’s growth story or political economy, then chronology | clubbing | categorization | critically analysis skills are as important as the memory-recalling power.

As such there are 50 dozen types of farming / cropping methods, but above one mentioned in NITI3YR hence had to write here. For more on Agriculture, refer to Rajtanil’s Geography Lecture

I think this much content is sufficient for handling most of the 200 words question related to Agriculture research and technology in paper-III. So let’s put it to rest here.