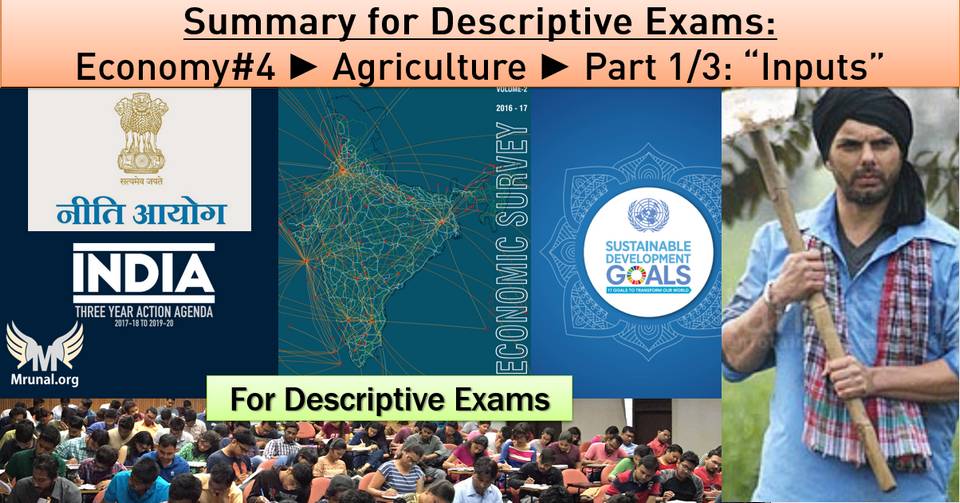 As the title suggests, this article series contains summary of:

+ some other reports / issues that I deem important for descriptive exams.

This credit initiative list is not exhaustive. But these many points sufficient to fill a 200 words answer.

Agriculture Loan Waiver: to give or not to give?

Some of the state governments have initiated loan waivers to address the problems of farmer suicide and agriculture distress.
But, RBI, SBI and economists are opposed to this because:

Hence Debt waiver is at best a short-term remedy that can’t prevent farmer suicide until above three issues are addressed.

More points can be written but encyclopedic knowledge is a curse in UPSC Mains Exam.
It’s true that alcoholism/gambling, family /marital issues, casteism, incurable disease etc. too play a role in driving a villager towards indebteness and suicide; and sometimes naturally died villager’s family would induce poison after death to claim insurance money etc. but in 200 words question you should avoid all that peripheral bolbachchan. Else, you’ll run out of space without touching the core issues. When writing answer, keep in mind you’re not appearing for recruitment of Panelists in NDTV and TimesNOW.

Once you’ve gathered above five inputs, you need land to plant them for cultivation…. That’s for understanding, but if asked any land related question in exam, how will you ‘begin’ the answer? You can start with its origin / significance to agriculture i.e.

Associated Topic for Mains GS3: “Land Reforms”. You can read my whole article series from mrunal.org/polity#land-reforms

Farm soil Erosion how to reduce?

News reports point out that insurance companies are rejecting / delaying claim settlement. Thus Government insurance scheme is not benefiting the farmers. Again the PHD-Enthusiast aspirants jump the gun to find the reasons and suggest the reforms. But, in the UPSC exam, you should have the mental aptitude to connect the dots without needing to google for it. (as some might called ‘guessmastergiri’).

What could be the “possible” reasons / reforms (Without googling):

Delay in general insurance claim settlement could arise from:

Possible reforms can be:

Now what are the “actual” reasons (after googling):

After UPSC changed mains syllabus in 2013, for the initial two years (2013 and 2014), they asked very minute and technical things from schemes and policies. But in the two subsequent years (2015 and 2016), they’ve moved towards grander, broader, macro level topics and questions. Observe:

Ofcoruse, still UPSC continues to ask random things and vaguely worded questions in mains. But proportionately they’ve decreased it compared to 2013 and 2014. We can go in the reasons / conspiracy theories behind such change….My take is that UPSC wants to give equal chance to candidates from faraway areas who can’t keep 24/7 watch on 50 current affairs websites, TV channels and Radioshows or dig last 5 years’ low-profile schemes and policies for problems and reforms. Because evaluators might have complained about the poor quality of answers in those trivial/minute detailed questions versus haphazardly written answers in short time limit vs. the difficulty in its objective evaluation.

So, “agriculture insurance  claim settlement kyo nhi hua?” It is a minute topic, not a grand topic worth dissecting. Because:

Therefore, don’t spend excessive time  and money on gathering latest and minutest things for GS Mains. Otherwise rest of your time will be spent in dissecting scheme / policies / IT-gadgets principles, problems and reforms only. Then when will you finish other parts of the mains syllabus?

Anyways, I’m done with “Agriculture Input” related points. You can add even more points/schemes in it for your own reference by copy pasting this in MS-word, but from my side, Economy’s 4th  pillar sectors -> “A” for Agriculture’s first part “Input” is over. In the next article, we shall see: