In the previous two articles, I covered summary of NITI3Yr & Economic Survey 2016 summary on what should be done at the input (farming) and research level to double the farmers’ income. Now to the last stage i.e. output (selling):

Why do we need MSP?

The markets for agriculture inputs and outputs are ‘inefficient’, because of speculation, hoarding and leakages. They result into high input cost and low output price. India farmers have very low resilience to such uncertainties because :

Hence, agriculture is usually a loss making business for farmer without government intervention. Unless he’s compensated by the means of subsidy on fertilizer, electricity and water; and MSP for the produce, he’ll be ruined. [MSP: न्यूनतम समर्थन मूल्य]

While Government announces Minimum Support Price (MSP) for 23 crops to cover the price risks faced by the farmer, but this system has following problems:

Replace MSP with PDP: why?

To solve above problems in MSP, Both NITI and Economic Survey recommend Price Deficiency Payment (PDP). 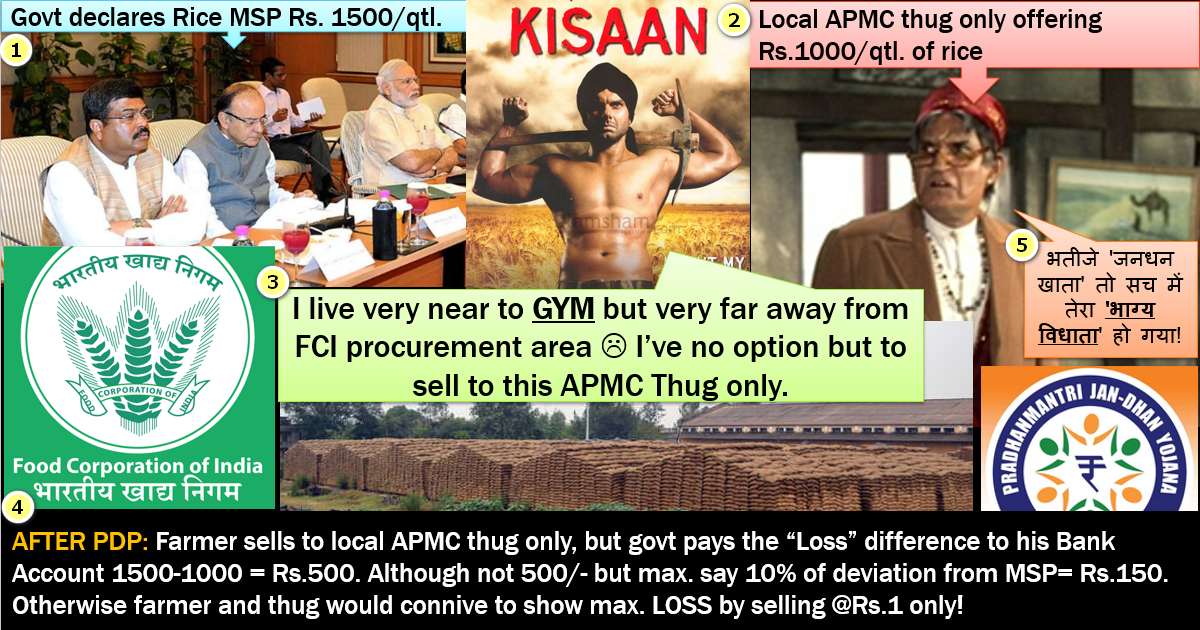 Since agriculture is a state subject, ultimately state governments have to reform their archaic laws. Union Government already circulated a model APMC Act, but most states have implemented it only half-heartedly. Hence, Both Niti3YR & ES16 have recommended following:

Apart from that, many points such as mega food parks, contract farming etc. already covered in my food processing article series for GSM3. See it on this URL

For all the descriptive questions associated with “agriculture selling”, you can utilize following readymade conclusions:

OR you can play the Pipudi of DPSP also:

By default, the food grains procured by FCI are to be sold at the PDS outlets. However, if there is rise in food inflation, FCI would also sell the grains in open market to increase supply and curb price rise. This is called Open Market Sale Scheme [खुला बाजार बिक्री स्कीम]. OMSS benefits:

Associated topic is Shanta Kumar Committee on FCI reforms. I’ve given its summary in this Article (Click Me).

I’m not going into Malnutrition, merits/demerits of DBT/UBI etc. here, we’ll see it along with Human development i.e. 6th pillar.
As such the three part series “input-R&D-output” is over, but some misc. allied topics are still pending such as Tomato inflation and animal husbandry. That we’ll see in the next time.