In the previous articles I’ve done the summary of Agriculture input, R&D and output related reforms suggested by Economic Survey and NITI3YR. Now let’s take care of some misc. topics of agriculture, with answer writing practice:
Answer following in 200 words each:

To gain maximum mileage from this, first write answer in A4 sized blank papers with 1″ margins and then proceed further.

Observe the ‘origin’ type introduction- It’s quite verbose and lengthy (86 words). I could have written in half the amount:

While ancient civilization practiced agriculture without use of chemicals, but modern nations opted for chemical intensive farming to achieve food security at the cost of ecological balance. Organic farming aims to undo this damage by avoiding artificial fertilizers, pesticides and other harmful cropping practices” (44 words)

Organic farming is not a regular topic unlike NPA, GST or financial inclusion. So, there is always a danger in the exam hall that you might not be able to recollect sufficient body points to fill 200 words. Then what will you do? Obviously the verbose bol-bachchan like this. Yes, UPSC rule says “Content is more important than length.” But observe that i’ve taken care to ensure that even the verbose origin is not looking ‘deliberated attempt’ to fill the space.

Organic farming’s theoretical aspects I’ve copied from NCERTs only. It proves these textbooks are relevant not only for objective exams but also for descriptive exams.

(Not part of the question but for revision )

Indeed the organic farming has significant utility in achieving sustainable development and environmental protection but for a country as populous as India, it can supplement but not substitute commercial chemical based farming, because of government’s commitment towards food security and inflation control.

Question was “Critically examine large scale adoption feasibility” so our conclusion should be ‘finding type’ – whether we should do it yes or no? So the finding is “no”. Moving to the next question:

With special reference to tomatoes, enumerate the causes and remedies for inflation in perishables food articles. (200 words) 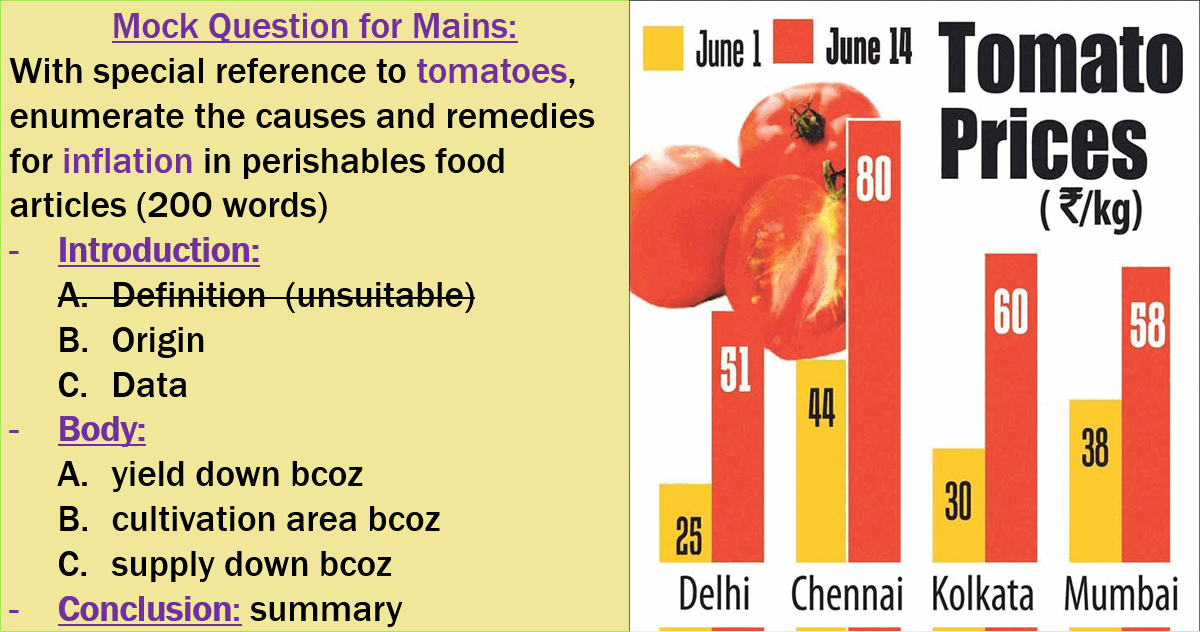 Introduction in all 3 ways:

Body#1: Tomato Yield has declined because:

For descriptive exams, No need to memorize the specific seed or virus name. I’ve mentioned them in article only for information purpose.

Body#2: Area under cultivation declined because:

Body#3: Supply has declined because:

The body was longer than 200 words but in the exam you won’t recollect all points so it’ll compressed down. Anyways, Question was “enumerate” the problems and remedies. So it’s a “discussion” type question. Therefore, conclusion should be “Summary”. (besides, what finding will you share here? that tomato prices have increased because of this this and this- but then it’ll become very lengthy summary!)
—
Tomatoes and other perishables are rich source of vitamins and nutrients. They’re part of large varieties of Indian and international cuisines. Therefore, Inflation in tomato prices is indeed a matter of concern both with regard to (1) nutritional security and (2) export competitiveness. Hence aforementioned factors need to be addressed on priority basis, to curb the tomato price rise.
—
^ Observe that I’ve avoided extreme phrases in conclusion such as “It’s a failure of Modi Government and this is the result of demonetization….” Because UPSC is conducting mains exam for recruiting civil servants, not theHindu columnists or opposition leaders.

Discuss the underlying reasons behind persistent inflation of pulses in India and suggest remedies.
As such pulses inflation is a one year old topic. In 2016, government had constituted a Committee under CEA Arvind Subramanian to study pulse inflation problem. But since UPSC didnot ask it that time, and UPSC has a habit of asking topics one-two years after they occurred, so you should prepare nonethless.

Let’s use the same template from tomato inflation!
With green revolution, we proved the doomsayers wrong about their forecast of food crisis in India. We became self-reliant in many crops. But pulses remained our Achilles’ heel because:

(Although not asked in the question but given here for revision:)

Question asked you to “discuss”, the conclusion should be “Summary” type.
Indeed, surge in pulse prices is a matter of concern- esp. for the poor and vegetarian population of India. With our diverse agro-climatic zones and large base of farmers, we can become self-reliant in pulse production, provided that the aforementioned issues in cultivation, procurement and sale are addressed at earliest.
OR you can blow the pipudi (small flute) of SDG also! Because if all three questions are asked in the same paper, then so far I’ve not SDG’ed any conclusion, so it’ll not look clichéd.
SDG goals require all the nations to eliminate hunger & malnutrition; encourage sustainable agriculture and double small farmers’ income. Indeed, pulses are significant in achievement of all these targets provided that aforementioned issues are addressed on priority basis.
For more details on pulses inflation, watch my lecture on this link.
Due to lack of time, I’m not doing the hindi translation, besides these topics have general english terms so you should be able to handle it on your own.