To get maximum mileage, first make sure you’ve finished atleast basic syllabus of UPSC Mains General Studies Paper-2.
Stationary: Use Blank a4 sized papers, make 1″ marginon each side.
All Questions are Compulsory. Answer each of them in not more than 200 words x 12.5 marks = 250 marks
Time limit: 3 hours. 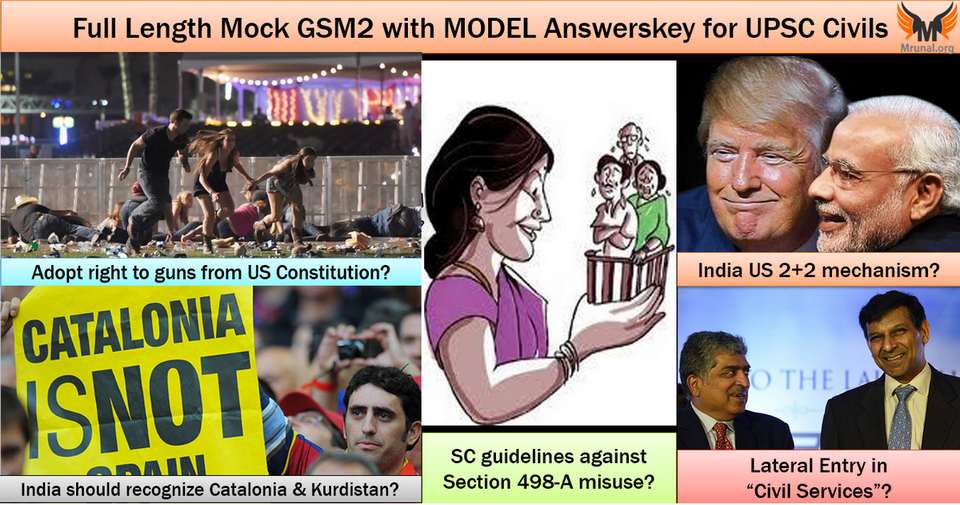 Due to paucity of time and engagement in other projects, it’s not possible to create all model answers. Beside if I spoon-feed you everything- it’ll stop your intellectual growth necessary for writing the descriptive answers. This is not a board exam. Let’s start:

Ans. This answer you should know. All the newspapers, completive magazines and e-learnings have dissected this in and out!
Introduction: Origin type. Why this case / controversy started Body:

Conclusion: question says “discuss” so summarize, why there can be no “absolute rights” in any constitution.

In news, because of the Las Vegas shooting. Introduction: (Origin type) The right to arms provided in US Constitution by the second amendment in 1791. (we can’t remember absolute years so let’s keep it in 18th century). At that time, the new country was still a fledgling state. Second amendment was necessary on following grounds:

Body#2: why not necessary in India:

DONOT digress too much towards peripheral or trivial topics e.g. – People will get bogus aadhar cards, stonepelters and naxalites will use these arms. – We’ll have to encourage Gun mfg. under make in India so the poor victims can afford. But since we’ve jumped directly from agriculture to service sector so gun mfg. poses challenge. And if we import too many guns it’ll adversely affect BoP. – Unable to get many gold medals in shooting competition because we don’t have this right

The question here is “bear arms in context of the violence against women, SC and minorities.” Remember the quality of the points is more important than length of the answer.

Conclusion: Question is “should we adopt gun freedom?”, so finding should be “Yes or No”. Ofcourse it should be “no”, because if you’ve so much distrust in police and ‘prashashan’ (administration), then you should not apply in the UPSC in the first place!
(Type#1) Atrocities against women and minorities are matter of concern but citizens need not bear arms. It’s responsibility of the state. Even within USA the lax gun control has resulted into growing incidents of crime and mass shootings in schools and public places.
(Type#2) American anthem mentions “rockets glare, the bombs bursting in air,…(USA is the) land of the free and the home of the brave.” It cherishes the weapons and violence in ensuring a free country, but we don’t. Right to guns is not in the spirit of our preamble which mentions “fraternity and unity” or our national pledge which says “all Indians are my brothers and sisters”.

Adequate maal available in article of TimesofIndia URL. Use it and some fodder about development, national integration etc and you can easily fillup 200 words answersheet. Further PHD unnecessary, unless political science is your optional.

First be careful in the choice of words- Constitution has “article”, laws have “sections”. So don’t write Article 498-A of IPC. Introduction (Origin)

Body#1: how misused and what SC guideline

Conclusion
Question is “Examine critically” so conclusion should be “Finding type”- whether new guidelines will – reduce victim protection? Finding should be yes or no.

Question itself easy but biggest danger is misinterpretation. Because you could misunderstand the context:

So, first understand context of the question with some examples:

Existing mechanisms are inadequate because:

Conclusion: Express apprehension and say that aforementioned reforms / measures need to be taken on war footing to prevent the loss of life and property as it had happened in the past because of fake news.

Provisions about election and nomination of the RS members, you’ll find in M.Laxmikanth’s chapter on Parliament.
Controversies:

Conclusion: Write why makers of the Constitution provided for this august house, comma, the aforementioned controversies are therefore a matter of concern and regret.

Q7: Right to Vote for educated tax payers only!?

Introduction (origin) Begin with the virtues and merits of democracy and voting rights to all: this you’ll find from NCERT social science and political science textbook. After all, the Right to vote is Constitutional right (!)
Body:

Besides, even if it’s a well thought and well planned advice, is any political party capable of implementing it, when they’re winning election mainly because of those poor and illiterates!? 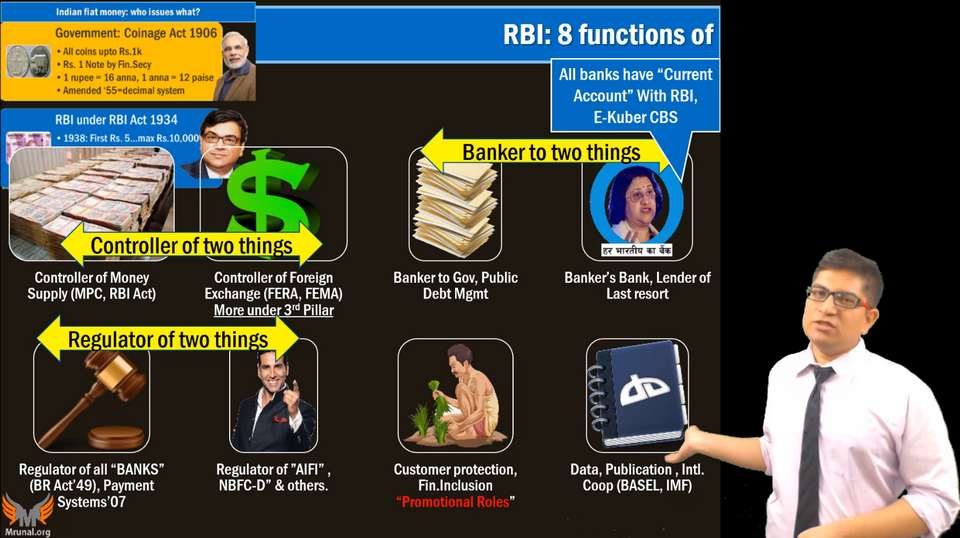 If you need help even in this answer, then I’ve failed you as Master Shifu failed his snow leopard student Tai Lung in the KungFu panda#1. Nonetheless, Here is my lecture link for the newcomers.

By the time you reach to this answer, you’ll realize that half of the paper is over, but you’ve spent more than half of the available time! So now don’t waste words on flowerily introduction. You may just start with opening line: “To reduce the school dropout rate in India, following measures are required” 1, 2, 3, 4….
Economic Survey 2016-17 (Vol2, Page 264, Box.2) itself has given traffic light approach to reforms:

Although this question is more suited towards GSM4 Ethics and case studies, but I’ve put it here since UPSC examiner does have habit of asking such अतरंगी (crazy) questions in GSM2 in Past e.g. should we give cash incentives to athletes or not, because they’re playing for the country and not for money! (CSM-2014).

Introduction (Origin): With the growing number of television owners and TV channels across India, there has been a surge of reality shows, including kids reality shows in the recent years. Here the prime objective of the producer is to milk the TRP and ad revenue from children’s talent. It leads to following problems:

Conclusion:
The importance of extracurricular and artistic activities in a child’s growth is undisputed, but such programs should be confined to school, community and district level only and with a format of talent “expression and appreciation” rather than “Competition”. Allowing Reality TV shows in this space leads to aforementioned issues, which can’t be prevented due to the economic reasons associated with TRP, SMS & ad Revenue. Hence they need to be banned.

Some interview coaching “Sirs” shove it down the throat of the aspirants that you must never say “ban it”….just parrot the line that “it should be regulated”…but if you’ve strong enough points you can take the extreme stand. Besides if alcohol, betting, drugs, prostitution, pornography and competitive exam coaching is banned it could occur underground also. so there you could find some ground for saying ‘Allow with regulation because they’ll exist nonetheless. however, in case of kids reality TV shows – if Government bans- they can’t run! [Yes, such shows could be hosted on underground on web (called “Deepweb”) or direct sell bootlegged DVDs but difficult to milk revenue from that.]

I’ve covered this issue fully in my lecture here.
Conclusion: Actions, mischiefs, controversies and difference of opinion among individuals in the corporate sector itself doesn’t mean corporate framework itself is weak. But the appearance of such controversies on frontpages of the newspapers hints that board and independent directors have not fully played the role assigned to them. Corporate Affairs ministry, SEBI and NCLT have been monitoring these developments and will amend the framework, as they’ve done in the past.

salient features of the proposed draft given here on Indianexpress
Benefits

Role of NGOs and civil services given in my lecture here. you can write benefits, challenges and other fodder from there.
Introduction (Origin)
Most Government schemes are centered around following three mechanisms:

NGOs are often accused of malpractices in the government schemes implementation in following manner:

Should we ban NGOs from scheme implementation?

Conclusion:
Given the shortage of manpower and the vast geography of India, it’s not possible for the government to deliver all schemes and benefities by its own personnel. Therefore, it has to engage individual agents, proprietors, agencies, companies and NGOs. An unscrupulous element will engage malpractices by wearing any hat necessary. Need of the hour is effective monitoring over the implementation by these entities, rather than banning any of these entities from engaging in implementation.

Side note: Under the earlier Government norms, only “non-profit bodies” were allowed to open medical colleges. But they were profiteering by capitation fees and donations. Therefore, health ministry is write to Medical Council of India to allow “commercial entities” to open colleges as well. But it didnot ask MCI to “BAN” non-profit colleges per se.

Q16: Referendum of Catalonia and Kurdistan:

Merit, Demerits and outcome of past Brexit, Scotland & Columbia Referendums given in my lecture HERE.
My own reading on these two latest developments (Catalonia and Kurdistan) is limited so difficult to premium quality model answer keypoints but nonetheless….
Points to consider:

Conclusion: Spain and Iraq are our diplomatic partners, who’ve not antagonized our interests in the international forums. And Even those who continue to antagonize us (China), we respect their territorial integrity. Therefore, we should not make haste in recognizing these new entities.

Conclusion:
by the time you reach this far in the paper and look at your wrist-watch- you’ll realize not sufficient time available to brainstorm a meaningful conclusion. so better leave without conclusion OR use the point number 5 as conclusion!

This is an essayish question. dozens of points can be written.
Introduction: Origin / Factor responsible

How does this affects India:

Conclusion: Foundations of Indian economy is strong enough to sustain the economic repercussion but the threats posed to our diaspora is a matter of concern and needs to be monitored and highlighted at the appropriate platforms.

if you spend more time, you can come up with even better points. but time is a luxury we don’t have in GS Mains papers.

How till India benefit from SCO?

How Pak.membership can reduce these SCO benefits?

Conclusion: Primary objective of SCO is Mutual cooperation to fight again terrorism, separatism and extremism in Central Asia. In the recent months, Pak. has been EXPOSED in at global level for utilizing terrorism as a state policy. It’s in our interest to keep the pressure on by either engaging with them or exposing them at every available global and regional organization possible, including SCO.

Dangers posed by Rogue states:
Presently we have cordial diplomatic relations with all those ‘labelled’ as rogue states by the USA, except N.Korea. [In May 2017, we banned all trade with N.Korea (Except food and medicine.) ]

What can UN do against rogue states?

Conclusion
Rogue states and totalitarian regimes pose danger to world peace and security. It’s in the interest of all nations, to promote democracy in such states and encourage them to join and abide by the international institutions such as UN.