Hint: CEA Arvind is invitee, CBDT’s Modi is convener. DTC only aims to simplify and consolidate existing income tax provisions, It’s not made to bring a ‘GST’ like direct tax for union and state. (Besides, how will you compute input credit and will that not encourage perrson to produce dozen children for circular-credit claims?)

Q. What is the purpose of Injeti Srinivas committee setup in 2017, November?

Hint: For ease in GST return filling, government has setup Ajay Bhushan Pandey panel- who is also the chairman of GSTN network. Injeti is secretary of corporate affairs, and his committee will look after the I&B Code.

Q. Which of the following bank has launched India’s first lifestyle digital banking service platform known as ‘YONO’ (You Need only one) in 2017, November?

Hint: YONO App & website aim to tap customers from the e-commerce and lifestyle shopping segment. It’s launched not by a private commercial bank, nor by a public sector bank which is located in a small dingy corner. (खोपचेवाली सरकारी बेंक भी नहि है।).

Q. What is the objective of UMANG App? 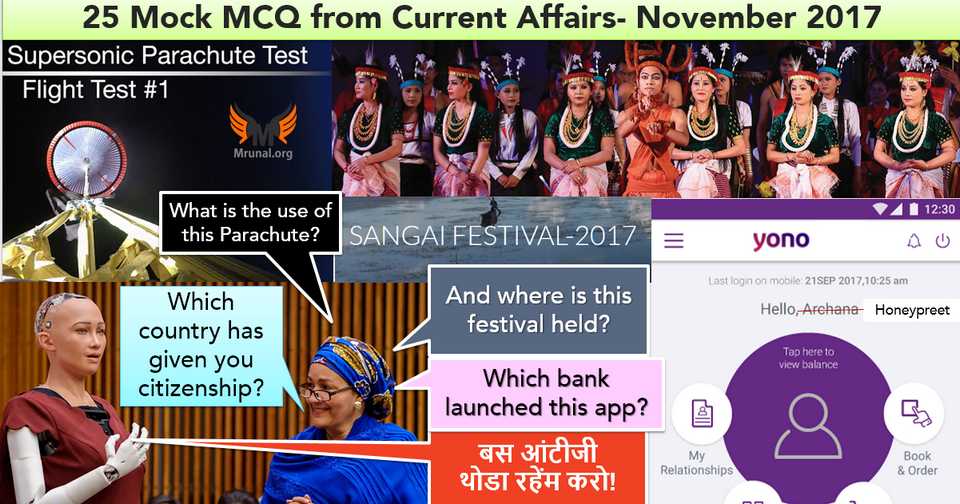 Hint: UMANG’s full form is Unified Mobile App for New-age Governance. So you should be intelligent enough to decipher which option matches with the full form.

Q. Which of the following is/are constitutional bodies?

Hint: 123rd Constitutional Amendment bill 2017 aims to grant constitutional status to NCBC. When it’s passed, the answer will change. Topic in news, because Government is likely to table it during winter session.

Q. According to Article 85 of our constitution

Hint: Constitution doesn’t give any labels such as ‘budget’, ‘lame duck session’, or that ‘winter is coming’. Rajya Sabha is a ‘continuous / permanent body’ but not because it sits for 24/7 but because of its membership retirement cycle. Topic is in controversy because Government seems to be delaying the winter session due to Gujarat election campaign.

Hint: Country with largest Muslim population in the world.

Q. In Which of the places did Indian National Army (INA) hoisted Indian flag for the first time on Indian soil?

Hint: Although guessmastersTM would say that first statement ought to be wrong since it has an extreme word ‘fastest’-but Bramhos is indeed the fastest supersonic missile. Missile is named after two rivers, the Brahmaputra and the Moskva. [Meaning only two nations are involved.]

Q. What is the objective of NASA’s supersonic parachute, which was tested in November 2017?

Hint: Advanced Supersonic Parachute Inflation Research Experiment (ASPIRE) will be used for landing a rover on Mars in 2020.

Q. Which of the following country has granted citizenship to Sophia, an android robot in 2017?

Hint: It’s the same country that granted “Sports” status to Yoga in 2017.

Q. Who among the following will be the chief guest at the republic day parade of 2018?

Hint: For the moment it is “none of the above”. Because while Modi has invited all 10 ASEAN leaders but so far only Singapore PM confirmed the participation. (as of 15th Nov 2017). When all confirm, then Answer will be “3”.

Q. Robert Mugabe has resigned from the presidency of which country in 2017, November?

Hint: Country whose old name is Rhodesia, Capital is Harare, and once famous for its cricket team.

Q. Justice Dalveer Bhandi has been appointed for the second term at ___ in 2017, November.

Hint: ICJ hears cases between nations. ICC hears cases against war criminals. Guessmasters would also hint at word association- International criminal court (ICC) links with “Criminals”, but ICJ doesn’t, so first statement ought to be wrong so by elimination we are left with correct answer ‘2’.

Q. India is a member of which of the following developmental banks?

Hint: 1 or 4] In 2017, November, the Cabinet approved plan to join EBRD, but FinMin yet to finish the modalities. So, until then answer is 1, and once we formally join, the answer is 4.

Hint: Both statements are correct.

Hint: 2017 is special year for ASEAN as it completed 50 years, but the actual theme of this Manila summit was “Partnering for Change Engaging the World”.

Q. In which of the following summits of 2017, was India given the full membership in Shanghai Cooperation Organization?

Hint: In 2017-SCO summit will be held @Sochi, Russia in November-December and Sushma Swaraj will participate. But it was in June month’s Asthana summit where India and Pak were given full membership.

Hint: Theme is right but who can memorize such long theme name!? Guessmasters would try for ‘word association’ that since it’s an IT summit, it must be either in Bengaluru or Hyderabad, but nope, this annual summit was held in the Indian city which is most notorious for pollution, rapists and coaching mafia.

Q. In the sidelines of ASEAN Summit 2017, certain countries decided to resume their “Quadrilateral Security Dialogue (QSD)”. These countries were:

Hint: Two of these countries are famous for their cricket teams.

Q. Yoga has been given the status of a “Sport” in which of the following country in 2017, November?

Q. Which of the following Indians has/have the distinction of scoring 50 or more centuries in International cricket?

Hint: Gavaskar had exhausted age and attempt limit before he could succeed.

Q. Ashes Test cricket series 2017 is to be played between:

Hint: BCCI is so money hungry they would parachute Indian cricket team in any tournament- even against Burkina Faso, BUT Ashes is played only between two countries, none of which are located in the African continent.

Q. Who among the following has became Miss World 2017?

Hint: Same state where Honeypreet and her ‘Papa’ are jailed.