Hint: Topic in news because Union Government has appointed Badri Narain Sharma (IAS) as first chief of NAA in 2017-Nov. Tenure: 2 years, can be extended by GST council. 2nd statement is right- but here you’ve to find incorrect statement. To learn GST for competitive exams, Watch my lecture. 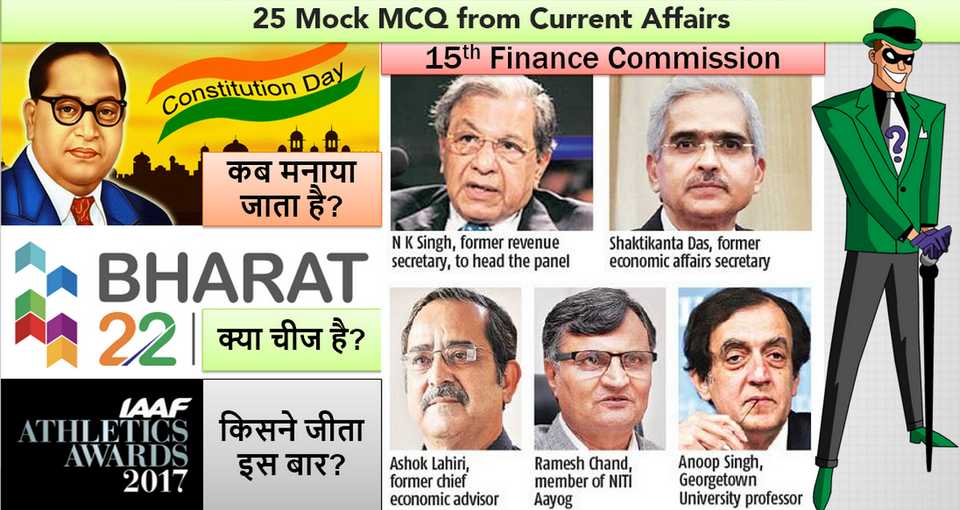 Hint: At G20, India’s finance track is managed by Economic Affairs Secretary from finance ministry, while development track is coordinated by the Sherpa. Shaktikanta’s astronomical stars are bright as he has cleared IAS exam in 1980, and both 15FC fulltime membership and sherpa selection in 2017-Nov.

Hint: World bank prepares this report. China is already doing good so can’t expect them to jump 30 ranks. India’s rank was 130 in 2017 and improved by 30 ranks for 2018. AND Mind it: you’ve to find wrong statements, not the right ones!

Q. The Delhi state assembly is empowered to make laws on all subjects enumerated under the state list and concurrent list of the Constitution, except:

Hint: Under Article 239-AA, LG has the powers to make laws on those three subjects. Topic in news due to ongoing case at Supreme Court.

Q. Which of the following is wrongly matched against the official definitions by the Government of India?

Hint: Crime rate is in news because National Crime Records Bureau, an attached office of Ministry of Home Affairs has released annual report in 2017-Nov. IMR measured per thousand, remaining two are measured in per lakh.

Q. Match the following famous cases of 2017, with their subject matter:

Hint: If Baby ko Bass pasand hai, then what would “P”uttaswamy like? Shayara Bano dislikes Triple Talaq, and Rajesh Sharma says that at best only husband and his parents could be demanding dowry and harassing the bride, so the tendency to arrest all family members on oral testimony of bride is wrong. Eliminate wrong pairs accordingly.

Hint: As GuessmastersTM would point out: first statement ought to be wrong since it has extreme word ‘ever’. Topic in news because Senior IAS officer Snehlata Shrivastava was appointed the new Secretary-General of the Lok Sabha in 2017-Nov. Both houses have separate Secretary generals. Third statement is right but, in the table of precedents- all three constitutional bodies are ranked at par (CAG, CEC, UPSC) and much higher than Cabinet Secretary. Eliminate accordingly. Mind it, you’ve to find wrong statements, not the right ones.

Q. In India, 26th November is celebrated as

Q. Which of the following state government has tabled a bill to award capital punishment to those convicted of raping girls aged 12 and below?

Hint: It’s the same state where school children are ordered to answer roll calls with ‘Jai Hind Sir’ and whose roads are said to be even better than that of USA.

Q. China signed a free trade agreement with which neighbor of India in 2017 (November)?

Hint: China has only two FTAs among Indian neighbors: one of them is labelled as ‘Terroristan’ at UN and second country is where India had conducted Operation Cactus in 1988.

Q. Match the following Operations with their geographical locations

Hint: 2017, June: CRPF launched Operation Prahar-I against Maoists in Sukma district of Chhattisgarh, then in November they again launched Prahar-II against Maoists in Bastar region. 2017: Army launched Operation All in Kashmir to wipe out militants before winter. 1974: Op. Smiling Buddha to test nuclear bomb at Pokhran, Rajasthan- it’s in news because of new movie ‘Pokhran’, which is delayed due to ‘Padmawati’.

Q. Which of the following military exercises are correct?

Hint: Such factual information is more important in UPSC’s CAPF and CDS exams, than in CSE (Civil services exam). Both right.

Q. In which of the following countries, a public debate is going on to provide for “Vindaloo Visas” to the chefs of Indian subcontinent?

Hint: Vindaloo is a a very hot Indian meat-curry. Those who had enslaved India for 200 years enjoy it, but facing chef shortage, hence proposed 1 year short term visa.

These are also less relevant for UPSC prelims but more important for lower exams.

Q. Who among the following has won the gold medal in World Weightlifting championship held at Anaheim, USA** in Nov-2017?**

Hint: Lady with similar first name has served as the speaker of Lok Sabha during UPA rule.

Hint: Country is famous for its Airlines and Al-Jazeera channel.

Q. Who among the following have become IAAF Athletes of the year in 2017, November?

Hint: Winners belong to countries whose capital cities’ names start with the letter ‘B’ and ‘D’.

Hint: Both winners announced in 2017, November, and both statements are right.

Q. International Sand Art Festival 2017 is being organized at

Hint: It’s beach near Konark (so guess which state?) Gahirmatha Beach has the world’s largest known rookery of Olive Ridley sea turtle. Government wouldn’t want to disturb it with tourists!

In UPSC Prelims 2017 CSAT Paper-II, 29 out of total 80 questions had only “1-passage-1-MCQ”. It means paper was lengthy because you had to read more. Maths-Reasoning was also tough and lengthy. Many candidates couldn’t even finish the paper on time, or tick sufficient number of MCQs to cross the 33% passing marks barrier. So, don’t neglect Paper-II.

Read the following passages carefully and answer the questions given below it:

Prakash Padukone says, “Indian players need to strike the right balance between training and the number of tournaments they play. Look at PV Sindhu’s run to the silver medal at the Rio Games! She had taken a six-week break before the event because she wasn’t doing too well and took some time off before Rio, but peaked at the right time and ended up becoming only the second shuttler from the country to stand on the Olympic podium. Although, there’s no guarantee that if you skip tournaments, you will win. But it’ll give you the best chance of playing to your potential in the big events. Now look at Kidambi Srikanth- he won four Super Series titles, but the shuttler is now struggling to be fit for at the World Super Series Finals in Dubai next month.” (~150 words)

Q. According to Prakash Padukone, what is the crucial factor undermining the medal potential of Indian badminton players?

Hint: Padukone doesn’t say Sindhu or Srikanth were suffering from injuries He doesn’t say they lacked training. Padukone’s attention is on ‘lack of peak physical condition’ before big tournaments- which is resulting from Overexertion i.e. Overuse of physical or mental energy that results into discomfort or injury. Observe how he narrates Rio: ‘Sindhu….becoming only the second shuttler from India’: Meaning our medal potential was higher, had more Indian players were careful in pacing their tournaments as she did. Hence answer is not forth option but third option.

Tamil Nadu government would set up coaching centres to help students face the National Eligibility-cum-Entrance Test (NEET). Secretary of Department of Health and Family Welfare J Radhakrishnan informed the Madras court that the state will identify teachers in every district to impart training to provide coaching to NEET aspirants. Exclusive training centres for competitive exam aspirants will be opened in all districts at a cost of Rs 72 lakh.
Educationist Dr.Anil Sadagopal said, “The very idea of coaching centres was detrimental to the education system and similar to training horses for a race. Coaching centres are places to teach tricks. How will they help a doctor or engineer? Moreover, the idea of coaching centres by the state is contrary to the two Bills related to MBBS and MD which were passed in the Assembly and are awaiting the President’s approval.”
Prince Gajendrababu of State Platform for Common School System, is enraged, “NEET and this idea of coaching centres comes from minds that have no clue about how the majority live in the country. Imagine if I am a student and my father is a fruit seller or farmer. Should I not go and help my father after class hours?… Aren’t you giving me enough lessons in the school syllabus and asking me to attend coaching classes in addition after my class hours? Why should I pass the higher secondary exam then? Aren’t you insisting that I excel in a memory testing game called NEET?” (~250 words : Ref-IE)

Q. Central theme of the passage is:

Hint: only last sentence of passage is devoted to “anti-NEET”. Hence can’t taken as ‘central theme.’ on the other hand, theme #2 and #3 are recurring multiple times. Sadagopal is slamming both #2 and #3. Prince’s statement “this idea of coaching centres comes from minds “….this idea means ‘Government giving coaching’.

Q. Which of the following can be inferred conclusively from the passage:

Hint: #1 is a possibility but can’t be inferred conclusively, as no information is given about what other states are doing. Health Secretary informed court that state will identify teachers in every district to impart training to provide coaching to NEET aspirants. He wouldn’t have done so, if Government didnot believe in #2. so, answer is only #2.

Q. “NEET is not a comprehensive test to judge a candidates’ ability.” Who among the following will agree with this statement?