Q. SEBI appointed Narayan Murthy panel has made recommendations on Alternative Investment Funds (AIF) in 2018-January. Which of the following are example(s) of AIF in India?

HINT: All of them are correct examples. I thought of framing more technical MCQ like What is Murthy’s recommendation about tax-pass through effect or application of securities transaction tax, or even the classification of three types of AIF. But as explained in my financial market lecture : SEBI/sharemarket related MCQs are not regularly asked in UPSC, and even there technical MCQs are rare and the strike rate is poor (i.e. you having heard of a given topic and correctly remembering its answer.) Hence no point in dwelling deeper.

Q. RBI is soon to launch a new Rs 10 notes in the Mahatma Gandhi series with Chocolate brown color. Find correct statement(s) about its features:

HINT: It’s tempting to think that since both PM Modi and RBI Governor Urjit Patel have roots in Gujarat so it’d be Modhera’s Sun temple, but this paper currency note is going to have Chariot wheel of Odisha’s Konark Sun temple. Only third statement is right. The existing 10 rupee note features images of the country’s fauna – rhinoceros, elephant and tiger. For more GK related to currency notes for Banking exams, Watch my Lecture.

HINT: In Prelim-2017, UPSC asked about Manipuri Sankirtan which is in the UNESCO list. (Read full list here– for any possible questions in future!) Both Kumbh and Mahamastakabhisheka are held at the interval of twelve years.

HINT: Meira Kumar (Kripya Baith Jayiye) was the first female speaker of LS (2009). Indira Gandhi held defense portfolio for sometime, while she was PM. Justice M. Fathima Beevi was the first female judge of SC (1989). But if it’s asked Who is the first female to become SC judge directly from lawyer (and not through promotion from HC judge)? then Indu Malhotra is right.

Q. From July 2018 onwards, an Aadhar card can be authenticated using:

HINT: Traditionally, Aadhar card can be authenticated using 1,2 and 4. but sometimes there is difficulty on using fingerprint or iris scan on account of old age, hardwork or medical condition (amputee or blind etc.) Hence facial recognition permitted, but it has to be combined with any of the 1, 2 or 4.

HINT: Virtual ID will be a random 16-digit number. Authentication of an aadhar / its virtual ID will still require fingerprint, iris or OTP.

Q. What is the primary motive(s) behind the concept of “Office of Profit”?

HINT: To prevent horse-trading, there is Anti-defection law. To prevent corruption, there is Prevention of corruption act. The concept of office of profit evolved from England where king would try to influence the MPs by offering them posts in the royal factories and estates. But this type of temptation harms the independence of legislature from the executive. Yes, ban on office of profit also deters 1 and 2, but the primary and ‘grand’ motive is only 3.

HINT: Parliamentary Secretary’s oath is also administered by respective PM/CM. CEC’s advisory binding to the President on office of profit. Article 103(1) of Constitution says that if any question arises as to whether a member of either House of Parliament has become subject to any of the disqualifications, the question shall be referred for the decision of the President and his decision shall be final. Article 103(2): (But) Before giving any decision on any such question, the President shall obtain the opinion of the Election Commission and shall act according to such opinion. “SHALL” = President is bound by EC’s advise. This topic is in news because Election Commission of India recommended to President disqualification of 20 AAP MLAs who enjoyed “Office of Profit” because of their position as “Parliamentary Secretaries” of Delhi government.

Q. Government of India has decided to give passports with orange colored covers. These specially colored passports are meant for:

HINT: first have Maroon colored passport, second have white colored passport. Indian citizens by default have navy-blue colored. But, When an India with low education and poor socio-economic background is emigrating to Afghanistan, Thailand or Middle East for work, he has to obtain an ‘Emigration Clearance’ from the office of the Protector of Emigrants (POE). This is to ensure he doesn’t get exploited by unscrupulous job-agents or employers. Earlier the default “navy colored passport” used to have this information : emigration clearance required or not required. But now, orange colored passport will be given to this workers, for faster processing. Though experts believe this will lead to further exploitation as foreign employer will know that worker is coming from poor socio-economic background. Hence controversy. You can read more in IndianExpress’s Explained series on this link.

Q. The government of Australia has announced culling of crown-of-thorns starfish (Acanthaster planci) in 2018-January. Why?

HINT: Coral-eating starfish are naturally occurring but have proliferated due to pollution and agricultural run-off at the struggling reef. According to researchers, these starfishes account for 50% of the damage occurred to Great Barrier reef in last 27 years. Hence Government announced culling.

HINT: Mandovi in Goa, Mahadayi in Karnataka. Longest River of Goa is Zuari. Dudhsagar is right. Topic in news because of the water-sharing dispute between Goa and Karnataka. 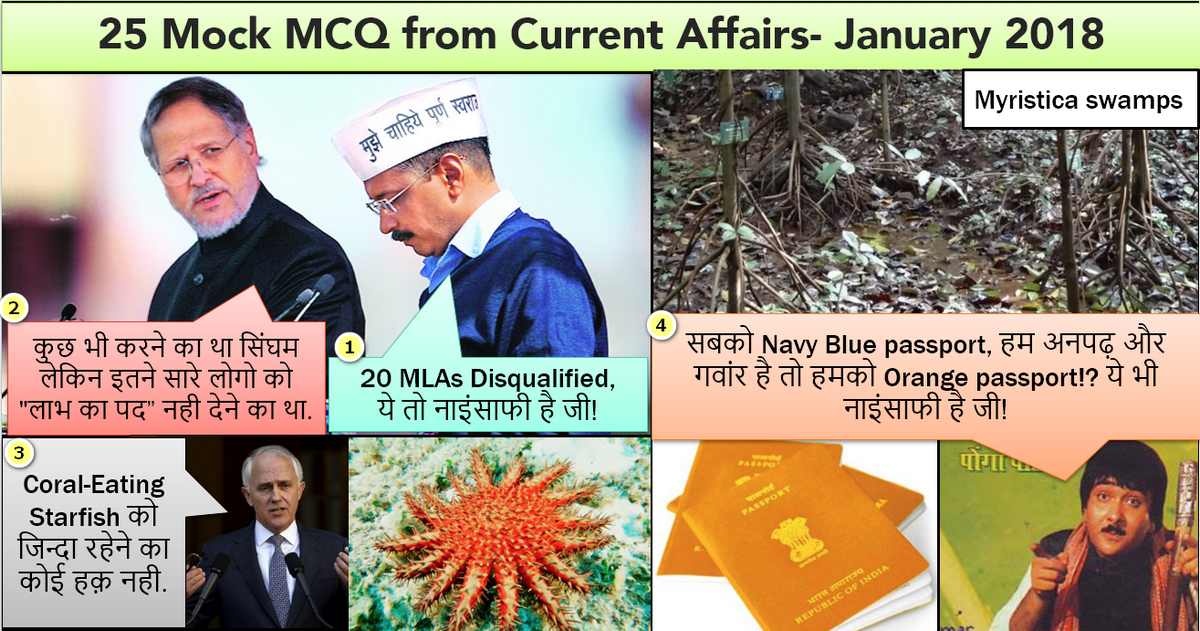 HINT: Topic in news because if Karnataka constructs dam / diverts the Mahadayi river then salt-water may intrude in the Myristica swamps of Goa, thus harming biodiversity. These are fresh water swamps found in Karnataka, Goa and Kerala. Myristicaceae is a primitive family of flowering plants. Don’t loose sleep if you can’t solve such MCQ, because UPSC is expected to frame a few such ‘crazy / technical’ questions on environment and forestry to test the IFoS questions. The civil service aspirants are not expected to know all these answers.

Q. “Conflict of Interest: My journey through India’s green movement” (2017) is a book written by noted Indian environmentalist:

HINT: Author is a female.

HINT: Geographically the smallest of above states. This development has irked environmentalists because they fear some reckless farmers will overexploit groundwater, thereby increasing fluoride contamination.

Q. In December-2017, Ministry of New and Renewable Energy (MNRE) released a concept note called “SRISTI”, it pertains to:

HINT: All correctly matched as per NIOS Culture book page 215, and NCERT Class6 Mathematics. Topic in news after Rajasthan’s Education minister said Brahmgupta had discovered gravity long before Newton. Brahmagupta was a 7th century Indian mathematician and astronomer who wrote Brahmasphutasiddhanta and lived in Ujjain. For Rajasthan’s PSC exam and lower clerical exams one should memorize all GK facts about him, including his discoveries- both real and imaginary.

HINT: Intel, AMD, Qualcomm and ARM CPU’s are vulnerable, and therefore all types of operating systems are vulnerable. Because OS doesn’t run without CPU. The computer graduates appearing in UPSC CSE-2017 round of interviews, should prepare this in additional detail.

Q. What is TRAI’s stand regarding the usage of Wi-Fi and mobile in the aero planes (as of 2018-January)?

HINT: TRAI gave its opinion to the Department of Telecom: Allow passengers to make phone-calls once an aircraft reaches an altitude of 3,000 meters. But only Indian telecom companies should be allowed- to facilitate interception of calls for strategic / security reasons. inflight Wi-Fi is not a novelty or luxury, it is now considered a necessity. International airlines allow it so Indian airlines should also allow Wi-Fi. But On-board internet traffic must be routed to a satellite gateway on Indian soil for strategic / security reasons.

HINT: all correct for faster revision. Apart from these, Indian Airforce day celebrated on 8th October to mark 1932 when Royal Indian Airforce was setup. Indian Navy Day on 4th December to mark 1971 attack on Karachi Naval base. Indian Coast Guard Day on 1st February to mark foundation of this organization in 1977.

So far we reached 21 MCQs. so now I’ll frame a comprehension set with 4 MCQs to reach the magical (and stupid) target of 25 MCQs.

Comprehension for CSAT-2: Chital and its predators (4 MCQ)

Chital or spotted deer are the most delicious of the deer species—tigers, lions, leopards, wolves, hyenas, dhole, jackals- This makes them live their lives in a state of perpetual red alert! But, they’re well equipped to deal with this. At the faintest sight of danger, they’ll stamp their feet, reaching a maximum speed of 65 kmph. A tiger needs to be fairly close in order to launch a successful ambush, though wild dogs will simply run them down to exhaustion in relays.
Spotted deer need to drink at least once or twice every day – and this is probably one of the tensest moments in their day, because not only might the deer be attacked from behind by a big cat, but a submarine crocodile might suddenly lunge at them. But, they have figured out areas where the danger is greater (like around waterholes) or less (in open grasslands) and are appropriately vigilant.
And, yes, deer have their own early warning system in place: langurs perched high up in the trees scan the forests around and grunt out staccato warnings when they spot a big cats or wild dogs sneaking up. There’s a bonus, too, because langurs are wastrel feeders and discard a lot of fruit and drop a lot of what they eat, which the chital gratefully pick up. In turn, the chital will bark out their warnings if they smell danger that the langurs haven’t been able to spot from above. Other creatures that provide this security service include peafowl and lapwings, both of which give tongue at the first signs of danger. (260 words Ref: IndianExpress )

Q. Suppose langurs and deer stopped warning each other about the predators, and rest of their behavioral characteristics remained same as given in the passage, then their relationship will be best described by which of the following term?

HINT: Mutualism: both benefit. Neutralism: neither party affects each other. Amenalism: one species is inhibited while other is unaffected. Commensalism: One species benefits, while the other species is neither harmed nor inhibited. Now even both animals stopped warning each other about the predators, still Langur is wastrel feeder so deer will get to eat the discarded fruits. So, think which term fits into this relationship? For more on the types of interactions between species, refer to page 69 of the NIOS material.

Q. From the passage, what can be inferred about Peafowl and lapwings?

HINT: Langur is a wastrel feeder, we don’t know eating habits of peafowl and lapwing. If Chital smells danger, it’ll bark to warn others. Languar, peafowl, lapwings and other tree borne / ground borne animals and birds will also benefit…they can run away from whichever predator is approaching to kill them or their offspring. So, ‘mutualism’ type of symbiotic relation is inferred.

Q. From the passage, Who among the following has better chance to kill a spotter dear?

HINT: Read the passage carefully again: A tiger needs to be fairly close to kill them (before deer runs away). Langur and other birds might warn them before leopard (or any other predator) approaches. Deer have learned to remain vigilant near waterholes. But, wild dogs will simply run them down to exhaustion in relay-running. So, among the given predators, wild dogs seem to have better change.