Conclusion: North Eastern states are formed on ethno-linguistic lines. Culture differs within and across the state. Neither individual states nor entire region form a single block of uniform culture.

Gujarati, Marathi and Rajasthani languages belong to the same Indo-Aryan linguistic group, and Hinduism and Jainism have significant presence in these three states:

Conclusion: At the macro level, the border areas between two states of India have a distinct language and culture which is influenced by elements from both the states: Northern-Gujarat and Rajasthan, Southern-Gujarat and Maharashtra, Karanataka and Maharashtra etc. Still, to say that Western India as a geographical unit or Bombay Presidency as a historic unit forms a cultural unit, will be an oversimplification. If we don’t dissect the intra-state cultural differences then we can see three state-wise cultures i.e. Maharastrian, Gujarati and Rajasthani. Hence here States form cultural units, rather than Regions.

Conclusion: Majority of the Southern states are formed on linguistic lines, and while all these languages belong to same Dravidian family but their culture differs within and across the states. Southern India as a region is not a single unit of culture. However, if we demarcate Malayalam, Kannada, Tamil and Telugu cultures without doing microscopic dissection, then individual states are worthy of claiming the status of cultural units.

Conclusion: While certain feudal, martial and criminal elements [रंगदार / बाहुबली] may look similar across these states, Northern India as a region can’t claim to be a single ‘cultural’ unit. Individually, Punjab and Haryana are two states forming individual cultural units. 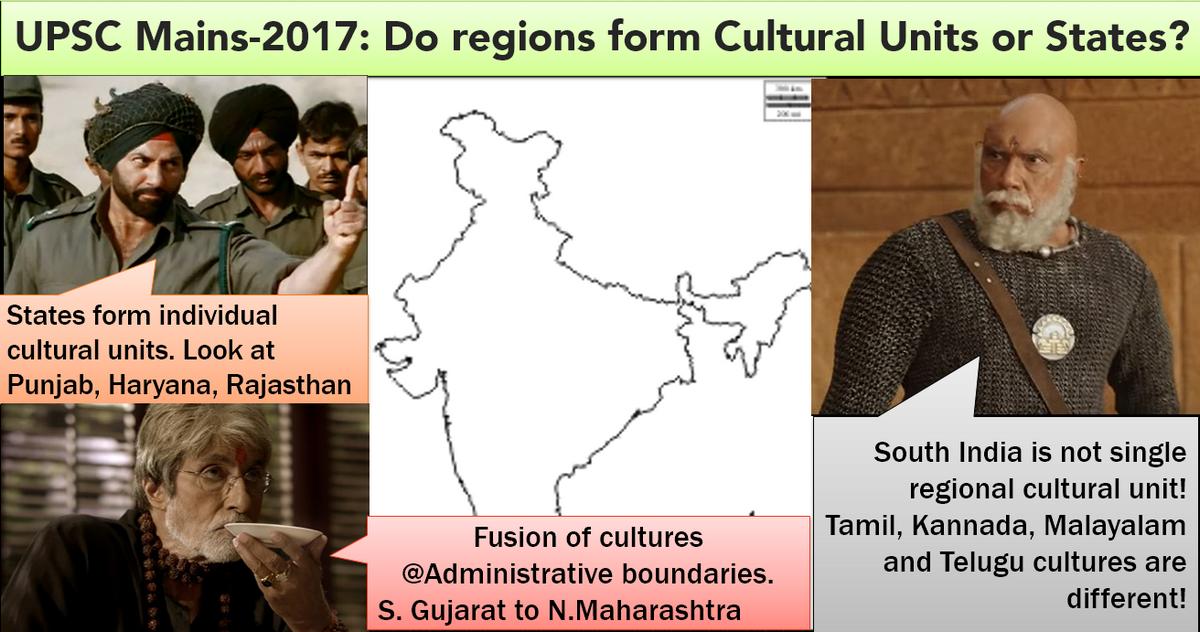 This is already ~1350 words. You can cherry pick the examples to fit your conclusion in favouring the states or the regions.