HINT: Daily consumption items such as curd, vegetable, fish etc. are exempted, even if value exceeds Rs.50k. One e-way bill will be valid throughout the country for the movement of goods, no need for separate bill for interstate / intra-state. Topic in news because inter-state module launched from 1st April 2018 in phase wise manner.

HINT: While guessmaster-giri would suggest that after PM-Jandhan Yojana and Demonetization, the number of bank-clients ought to have increased and therefore #2 ought to be wrong but unlike General Dong, you’re wrong. Both statements are right.

Q. Central GST Act provides for a “GST Consumer welfare fund”. From where does this fund receive money?

HINT: Fourth option. Topic in news because Government decided to give part of this fund’s money to state governments as grant for promoting GST awareness.

HINT: By, Ministry of MSME. First time ever being organized. Venue is Delhi.

Q. In 2016-April, Government of India had setup Banks Board Bureau (BBB). find wrong statement about this entity:

Q. What is “Angel Tax” in the Indian Direct tax regime?

HINT: Earlier, a tax-evader could open a phoney-startup, and get truckload of capital invested in it via foreign entity, and later when such startup’s shares are listed in Indian sharemarket, he’d sell them at very high price to third party (controlled by him), and thus try to convert black money into white. So, In 2012, IT act was amended to ensure that if startups are receiving funding beyond their fair-market value, then there will be tax on such capital. This is nicknamed as “Angel Tax” by the market -jargon. Topic in news, due to some technical reforms in it.

Q. (MCQ for Banking Exams) In which of the following private banks, majority of the shareholding is in the hands of foreigners?

HINT: Private bank is defined as a bank where minimum 26% of the shareholding is in the hands of Resident Indians. Maximum FDI limit is 74%. Foreign investors’ shareholding in Axis: 53%, ICICI: 60% and HDFC >51%

Q. In May 2018, PM Modi is set to inaugurate Kishanganga Hydro Electric project. Find correct statement(s) about this project:

HINT: Only first one is right.

HINT: It’s drafted by environment ministry. It reduces CRZ land-extent to 50 meters, and it allows temporary tourism facilities on the beaches. Meaning, all three are wrong.

HINT: all correct. Topic in news, by Minority Affairs minister said that because of above schemes more minority candidates have cleared UPSC CSE-2017 than in past. 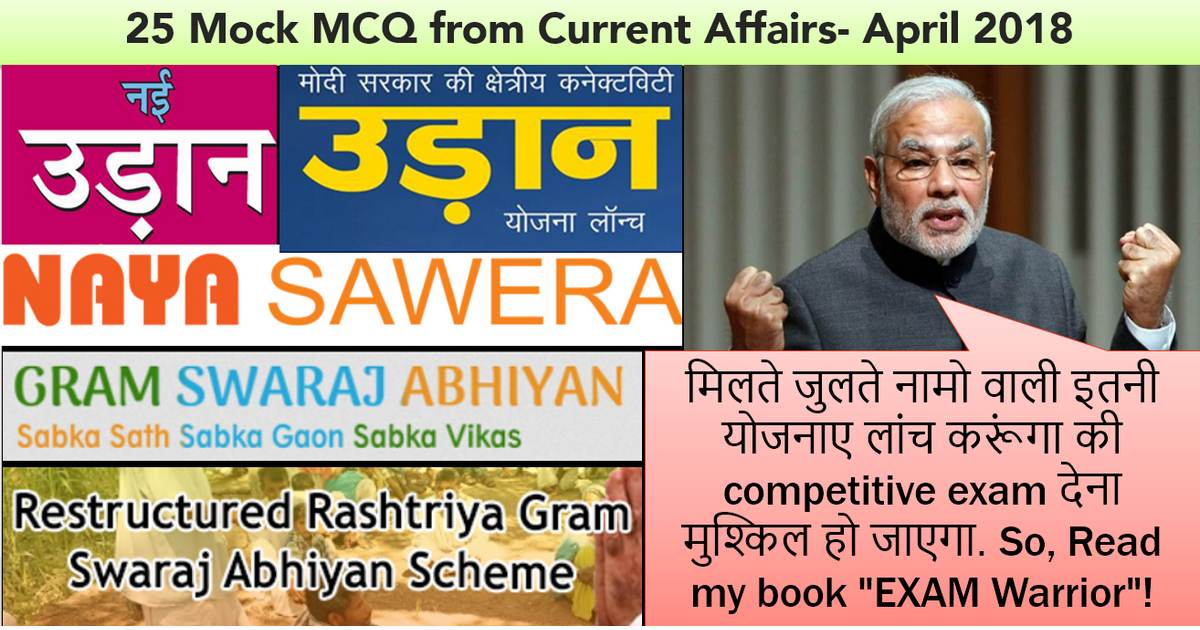 Q. An Individual Lok-Sabha MP can:

HINT: Topic in news, because Gujarat Vidhan Sabha rulebook amended to put ceiling on the starred questions per day by the same member. Anyways, regarding the Lok Sabha- all of the above statements are right.

Q. If an MP wants to get oral answer from a minister, he should submit written question to the Lok Sabha / Rajya Sabha secretariat with:

HINT: To seek oral answer, you’ve to ask “Starred question”. So, which of the above signs is matching a “star”?

Q. Under the Representation of People’s Act 1951, a candidate can contest from:

HINT: Max. two seats from Vidhan Sabha and Lok Sabha. In Rajya Sabha it’s not possible to contest simultenously from two seats because election is held state-wise and there is domicile requirement. तो एक उम्मीदवार दो राज्योका डोमिसाइल कैसे हो सकता है!? Topic in News because EC said in SC that it wants candidates to contest from max.1 seat only, during LS/VS elections. If one person contesting from two seats and winning from both seats then he’ll vacate one seat, it results in 1) betrayal of voters 2) increased cost of conducting by-polls.

Q. Which of the following commissions enjoy Constitutional Status?

HINT: In 2018-April, the NCM wrote to Government to grant itself Constitutional status.

Q. In 2018-April, Union Cabinet passed an ordinance (अध्यादेश) to provide for death penalty for the child rape. This ordinance amends which of the following act to implement death penalty?

HINT: While this ordinance amends all of the above codes / acts, but the “death penalty for rape / gangrape on woman below the age of 12”- this new provision is added in IPC.

HINT: Protection of Children from Sexual Offences (POCSO) Act was enacted in 2012. POSCO provides protection to all children under the age of 18 years from sex-crimes. POCSO e-box is in Ministry of women and child development.

Q. We already have Indian Penal Code (IPC), then why was there a need to enact POSCO Act?

HINT: IPC is not gender specific in sex-crimes, because it provides punishment for sodomy also, hence male-victims of sex-crimes are covered. if sex-crime victim is a child, IPC doesn’t automatically provide higher penalty to culprit or extra-protection / compensation to victim.

Q. In 2018-April, Government of India setup a 13-member taskforce under the Minister of State (Aviation) Jayant Sinha. This taskforce is related to:

HINT: committee will be a permanent body. NSA will be the chief. They’ll prepare India’s military doctrines and defense purchase roadmaps. panel will have four sub-committees, on Policy and Strategy, Plans and Capability Development, Defence Diplomacy, and Defence Manufacturing Ecosystem. Such Committee was tried in 70s also. So, this is not the ‘first time’.

HINT: Commonwealth is a voluntary association of 53 independent countries, almost all of which were formerly under British rule. 2018-summit’s venue was London, theme was: ‘Towards a common future’. It’s organized biannually. Mind it, you’ve to find wrong statements.

Q. The first city in India, where electricity company has to pay compensation to consumers for unscheduled power outages is:

Q. Which of the following state has drafted a medical policy with provision of compulsory “Vaccination certificate” for the children seeking admission in primary school?

HINT: UK was the first country to start mandatory vaccination else find of one pound (1853). Kerala has drafted above policy in 2018-Feb, because last year state government’s Measles-Rubella (MR) vaccination drive was not fully successful due to anti-vaccination / fake news campaigns in social media by Naturopathy doctors.

HINT: Fidel Castro died in 2016, you know which newspaper held its flag at half-mast and announced office-holiday for mourning. Havana is the Capital of Cuba, whereas Hawaii is a state of USA. Cuba is an Island country and Venezuela and Ecuador are in a different vicinity.

Rashitrya Gokul Mission aims to raise the productivity of indigenous and nondescript cattle by inseminating these with semen from the “super elite” native bull population of Sahiwal, Gir, Tharparkar, Red Sindhi, Rathi, Kankrej and Hariana breeds. This would mark a departure from the existing strategy, where the milk-yields of nondescript animals has sought to be achieved through crossbreeding with western breeds such as Jersey, Holstein Friesian and Brown Swiss which has shown promising results.

Yet, using an untested strategy, Gokul Mission projects an increase in the country’s in-milk cattle population from 88.35 million in 2015-16 to 116.38 million in 2023-24 at a time when anti-slaughter legislations and rising cow vigilantism has made the management and disposal of unproductive animals a veritable nightmare for farmers.

HINT: He is not using any adjectives or rhetorical language that can classify this passage as cynical or sarcastic. He’s not speculating the fate of the Mission but rather he’s skeptical about its success.

Q. Author would agree with which of the following points?

HINT: Author is skeptical about Gokul Mission’s strategy of “breeding with native bull” to increase milk yields. So, he’d not like #2. Passage reads “…departure from existing strategy, where the milk-yields of nondescript animals through crossbreeding with western breeds.. which has shown promising results.” So, Author would agree to try Tharparkar cows cross-breeding with Jersey bulls. Passage doesn’t have enough details to ascertain whether Author would agree for legalization of cow-slaughter and beef-eating, or not? He only showed concern about how these factors affect unproductive-cattle’s’ disposal- so we should not over-speculate his stand about legalization of those issues.