Q. Infrared, visible and ultraviolet radiations/ light have different properties. Which one of the following statements related to these radiations/light is not correct? (CDS-2017-ii) 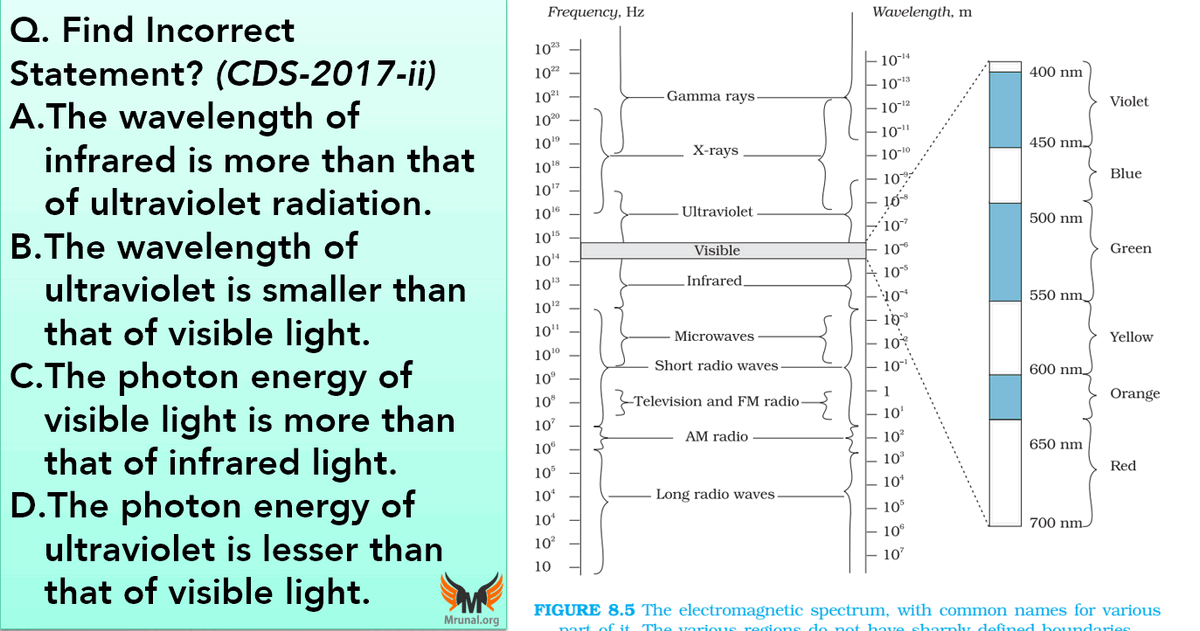 Q. When the Sun is near the horizon during the morning or evening, it appears reddish. The phenomenon that is responsible for this observation is (CDS-2018-i)

HINT: Light from the Sun near the horizon passes through thicker layers of air and larger distance in the earth’s atmosphere before reaching our eyes. Near the horizon, most of the blue light and shorter wavelengths are scattered away by the dust particles. Therefore, the light that reaches our eyes is of longer wavelengths. This gives rise to the reddish appearance of the Sun. Ref: NCERT Science Class10 Ch.11.

HINT: It’s not reflection but ‘refraction’ that creates advance sunrise and delayed sunset. An observer can therefore see a rainbow only when his back is towards the sun. Second statement is right- but here you’ve to identify the wrong statement. Read NCERT Class12 Physics ch.9 for more.

Q. Which of the following is suitable for making optical instruments? (CDS-2017-ii)

HINT: Sound is a mechanical wave and needs a material medium like air, water, steel etc. for its propagation. It cannot travel through vacuum. Ref: NCERT Science Class9 ch.12

Q. Ultrasonic waves are produced by making use of (CDS-2017-ii)

HINT: NCERT Class11 Physics ch. 15 says that Ultrasonic waves in air are produced by vibrating quartz crystal. But it doesn’t use the specific term for this i.e. piezoelectric material.

Q. Two wires are made having same length l and area of cross-section A. Wire 1 is made of copper and wire 2 is made of aluminum. It is given that the electrical conductivity of copper is more than that of aluminum. In this context, which one of the following statements is correct? (CDS-2017-ii)

HINT: The wire gets hot when an electric current passes through it. This is the heating effect of the electric current. Wires made from some special materials melt quickly and break when large electric currents are passed through them. These wires are used for making electric fuses If by accident the current exceeds this safe limit, the wires may become overheated and may cause fire. If a proper fuse is there in the circuit, it will blow off and break the circuit. Ref: NCERT Class7 Ch.14.

Q. Why is argon gas used along with tungsten wire in an electric bulb? (CDS-2018-i)

HINT: Argon gas prolongs the life of filament by reducing the evaporation of tungsten.

Q. Which of the following the fissile material is widely viewed as ‘Fuel of the future’?

HINT: World resources of thorium are larger than those of uranium. Thorium, therefore is, widely viewed as the ‘fuel of the future’. Ref: India Yearbook 2018 Ch. 25
Q) Which of the following player is trying to increase the friction?

HINT: First two want to increase friction, to have better grip. Third will reduce the friction, but that’s not asked in the question. So, those ticking #3 – are making silly mistake, even though their science knowledge is correct. NCERT Class8 ch. 12 friction.

Which of the above statements about operational principles of a nuclear reactor and a nuclear bomb is/are correct ?

Q. 2017’s Nobel for Physics is given to Rainer Weiss, Barry C. Barish and Kip S. Thorne for their contribution in the field of:

Q. Which one of the following planets was explored by Cassini Mission launched by NASA, which ended in September 2017 ? (CDS-2017-ii)

HINT: NASA launched Cassini in 1997. It had reached Saturn in 2004, and it was disintegrated in Saturn’s skies in 2017-September, in a carefully planed manner so that its debris don’t contaminate the planet. On a related topic, NASA’s Juno spacecraft entered the orbit of Jupiter in 2016, and UPSC had asked question about it in Mains-2017.

Q. Consider the following constituent gases of the atmosphere: (CDS-2018-i)

Which one of the following is the correct ascending sequence of the above gases, in terms of the volume percentage? 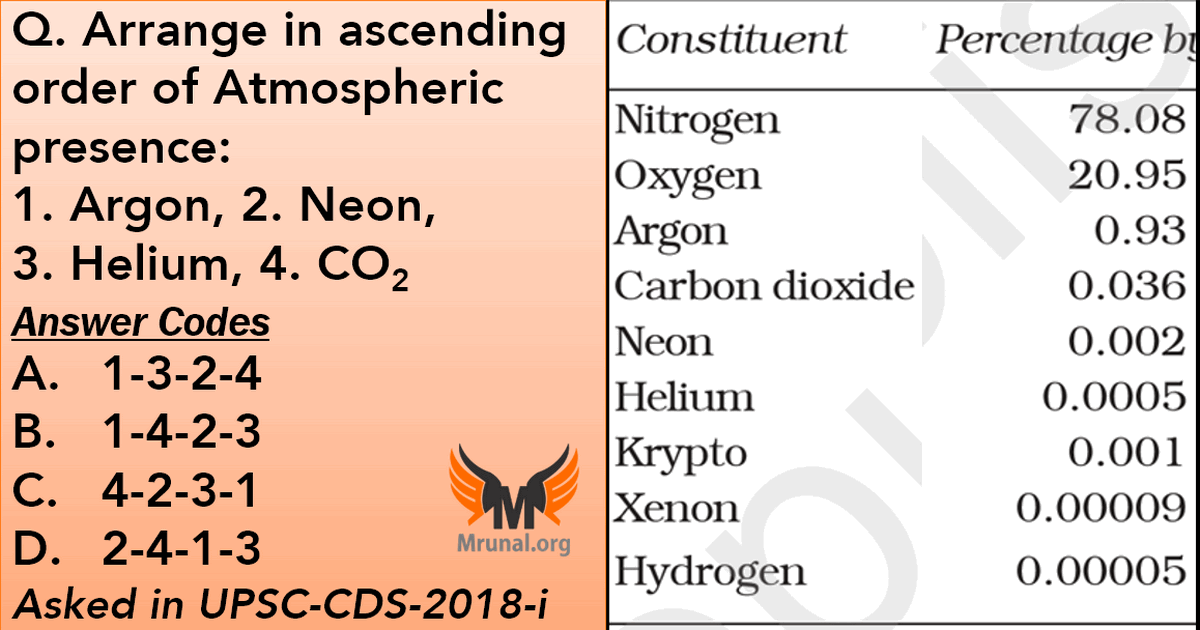 Q. Tincture of iodine is an antiseptic for fresh wounds. It is a dilute solution of elemental iodine, which does not contain (CDS-2017-ii)

HINT: Iodine is a powerful antiseptic. Its 2-3 per cent solution in alcohol-water mixture is known as tincture of iodine. It is applied on wounds.

Q. 2017’s Nobel for Chemistry is given to to Jacques Dubochet, Joachim Frank and Richard Henderso for their contribution in the field of:

HINT: if miscible liquids, then it’ll be a ‘solution.’ Emulsion is mixture of two immiscible or partially miscible liquids. Refer to this table from NCERT Class12 Chemistry ch.5 for better understanding of colloids, because that has been repeatedly asked in UPSC’s CDS and CAPF exams.

Q. Statement-I: Most of the medicines are colloidal in nature. Statement-II: Colloidal medicines have large surface area and are therefore easily assimilated in body. (Inspired from CDS-2017-ii)>

HINT: Argyrol is a silver sol used as an eye lotion. Colloidal antimony is used in curing kalaazar. Colloidal gold is used for intramuscular injection. Milk of magnesia is used for stomach disorders. Both are right and II explains I. Refer to NCERT Class12 Chemistry ch.5 for more.

Q. Which one of the following radioactive substances enters/enter the human body through food chain and causes/cause many physiological disorders? (CDS-2017-ii)

HINT: According to EPA: https://www.epa.gov/radiation/radionuclides

Q. Which one of the following proteins gives lustrous shiny appearance to silk fibre? (CDS-2017-ii)

HINT: Sericin’s main role is to envelop the fibroin. In presence of sericin the fibres are hard and tough and become soft and lustrous after its removal. So, guess which one of them is responsible?

Q. Match List-I with List-II and select the correct answer using the code given below the Lists : (CDS-2017-ii)

HINT: This is the minimum basics you must know! Ref: NCERT Science Class 9 ch.5p>

Q. Pearl is a hard object produced within the soft tissues of a mollusk. Which one of the following is the main constituent of pearl? (CDS-2017-ii)

Q. The foul smell of urine of a healthy man having healthy food, when spilled on floor, is mainly due to the bacterial decomposition of (CDS-2017-ii)

HINT: breakdown of urea into ammonia.

Q. Accumulation of which one of the following in the muscles of sprinters leads to cramp? (CDS-2018-i)

HINT: When there is a lack of oxygen in our muscle cells, pyruvate is converted into lactic acid. This build-up of lactic acid in our muscles during sudden activity causes cramps. Ref: NCERT Science Class10 Ch.6, page 102.