Q. Which of the following statements with regard to the heterodox sect between sixth and fourth century BC are correct?(CDS-2017-ii)

Which one of the following is the correct chronological order of building the above monuments?

Even if you don’t know the exact years, it can be solved. Fatehpur Sikri = Akbar, so in chronology, #4 ought to be the last piece. This eliminates A and D. Qutubuddin came before Tughlaq, so 3 ought to come before 1. This is not GuessmastergiriTM, because you needed to have some idea about chronology of Islamic rulers. बिना पढ़े तो प्रीलिम क्लियर नही हो सकती.

Q. Which twelfth century Sanskrit scholar was first responsible for the compilation of ‘Nibandhas’ or digests of epic and Puranic texts?(CDS-2017-ii)

Q. Which river is praised in the fifth century Tamil epic, Silappadikaram?(CDS-2017-ii)

HINT: Tamil epic, the Silappadikaram, was composed by a poet named Ilango, around 1800 years ago. It is the story of a merchant named Kovalan, who lived in Puhar and fell in love with a courtesan named Madhavi, neglecting his wife Kannagi. [NCERT Class6, Ch12]. But it doesn’t mention where exactly is Puhar located, however, this map from NCERT Class12 shows it’s in _ _ _ river’s region. 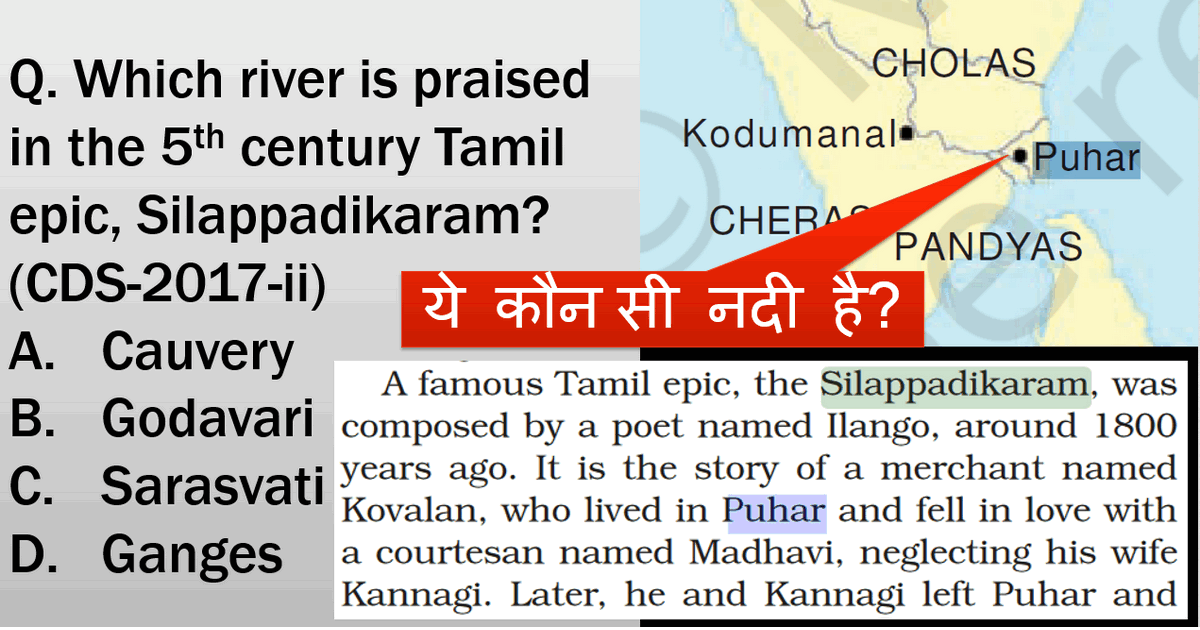 HINT: Harsha established his control over Kashmir and its ruler sent tributes to him. He also maintained cordial relations with Bhaskara Varman, the ruler of Assam. Harsha’s last military campaign. was against the kingdom of Kalinga in Orissa and it was a success. [Ref: Chapter- 10, Harshavardhana, Std 11 Tamilnadu Board , Page 115]

Q. Match List — I with List — II and select the correct answer using the code given below the Lists.(CDS-2017-ii)

Q. Which one of the following statements about the Harappan Culture is not correct?(CDS-2017-ii) 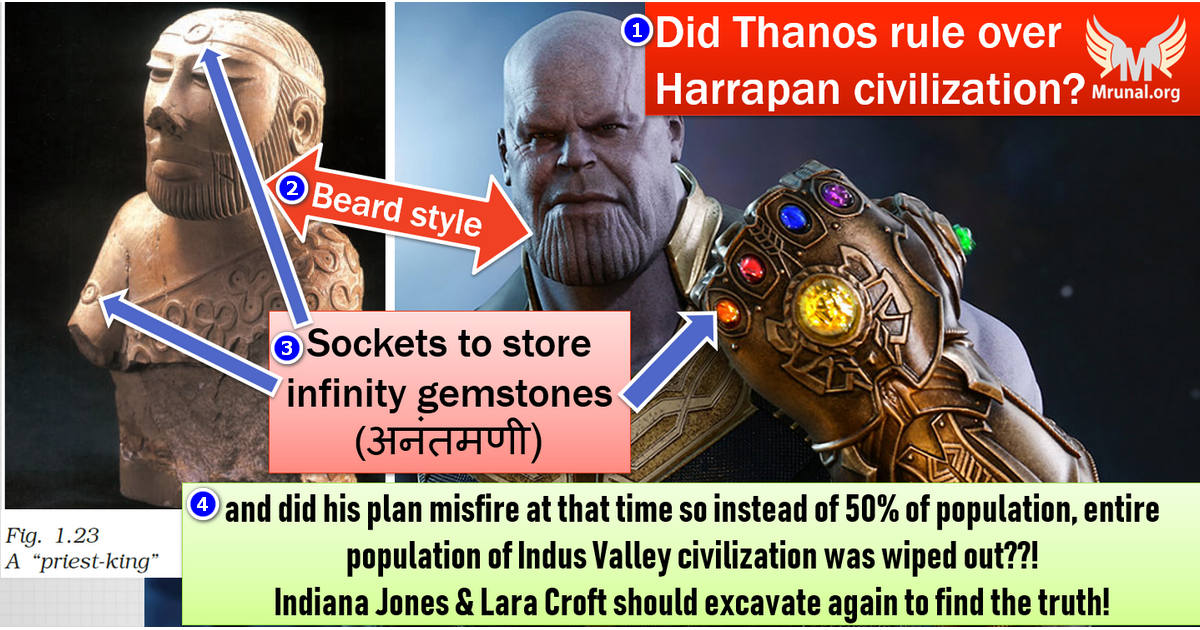 Q. Match List-I with List-II and select the correct answer using the code given below the Lists :(CDS-2017-ii)

It’s possible to solve through word-association type guess-mastergiriTM, provided you’re from the Hindi-belt: Urvarak = fertilizer, Marusthal= desert, Nadi= River. Anyways, Instead of putting this MCQ under “Geography” or “Ancient India” Category, I’ve put it in Medieval India because in past also, such अतरंगी (crazy) Medieval vocabulary had been asked here. e.g. “Pattakila”: king’s representative in the village, and “Mahattama” was the village headmen.

Q. With regard to nature of Mughal State, who among the following scholars argued that “the peculiar feature of the State in Muglial India was that it served not merely as the protective arm of the exploiting classes, but was itself the principal instrument of exploitation”?(CDS-2017-ii)

HINT: Irfan Habib in his ‘Agrarian System of Mughal India’ asserted this peculiar feature of the state in Mughal India. Sekhar Bandopaddhya in his book “Plassey to Partition”, has indirectly hinted about this, and cited Irfan Habib’s analysis to prove it.

Q. Which one of the following statements about the Gupta period in Indian history is not correct?(CDS-2017-ii)

HINT: The position of women had also become miserable during the Gupta period. They were prohibited from studying the religious texts like the Puranas. The subjection of women to men was thoroughly regularized. But it was insisted that they should be protected and generously treated by men. The practice of Swyamvara was given up and the Manusmriti suggested the early marriage for girls. [Ref: Std. 11 Tamil Nadu Board , Chapter 9 Page 105]

Q. Which one of the following statements about the Sayyid brothers during the period of Later Mughals is not true?(CDS-2017-ii)

Q. Which one of the following statements about the Treaty of Allahabad is NOT correct?(CAPF-2017)

Q. Due to which of the following factors, the Industrial Revolution took place in England in the eighteenth century?(CDS-2017-ii)

HINT: While world history is not part of Civil services prelim syllabus, I’ve included this MCQ for any indirect help in assertion-reasoning type ‘compared-contrast’ question in history or geography. All four statements are right. Ref: New NCERT Class11: Themes in World History, Chapter 7, The Industrial Revolution

Q. Which of the following active step[s] was /were taken by the Congress in 1923 to eradicate untouchability from India?(CAPF-2017)

Q. Statement I : Nationalism in India, which was assigned a privileged position by its western educated political leadership , was a ‘different’ , but a ‘derivative discourse’ from the west. Statement II : Indian nationalism as a response to western imperialism was ‘like all such responses, shaped by what it was responding to’(CAPF-2017)

HINT: UPSC examiner has lifted both statements verbatim from Plassey to Partition page 185: At one end of the spectrum, Partha Chatterjee would argue that nationalism in India, which was assigned a privileged position by its Western educated political leadership, was a “different”, derivative discourse” from the West. Ashis Nandy also thinks that Indian nationalism as a response to Western imperialism was “like all such responses , shaped by what it was responding to”. But does statement-II explain I?

Q. Statement I :Dadabhai Naoroji argued that what was being drained out was ‘potential surplus’ that could generate more economic development in India if invested in India Statement II : Imperialists believed that India was brought into the large capitalist world marked and that was in itself a progress towards modernization.(CAPF-2017)

HINT: UPSC examiner has lifted both statements verbatim from Plassey to Partition page 123: Indian nationalist Dadabhai Naoroji argued, what was being drained out was “potential surplus” that could generate more economic development if invested in lndia.148 The other imperial argument was that some of this expenditure was to encourage economic development in India in the way it had happened in the West. India was brought into the larger capitalist world market and that was in itself a progress towards modernisation.. So, both the statements are individually true but does #2 explain #1? To lean more about this topic, watch Pratik Nayak’s Youtube Lecture HFS4/P4: Economic Drain of wealth: Poverty & unbritish rule in India

Q. Which one of the following statements about Cripps Mission is NOT correct?(CAPF-2017)

HINT: Cripps had been told not to go beyond the Draft Declaration. Moreover, Churchill did not want Cripps to succeed and constantly opposed and sabotaged his efforts to accommodate Indian opinion. Stafford Cripps returned home in the middle of April 1942 leaving behind a frustrated and embittered Indian people. That means “A” couldnot have happened. Watch Pratik Nayak’s Youtube Lecture HFS11/P3: Cripps Mission (1942): Proposals of Post-Dated Cheque

Q. Which among the following was NOT the provision of the Gandhi – Irwin pact?(CAPF-2017)

Q. Which among the following was NOT the recommendation of the Nehru Report?(CAPF-2017)

HINT: 1928: Morilal Nehru report on the future constitution of India didnot recommend that India should be a federation on the basis of linguistic provinces and provincial autonomy, that elections be held on the basis of joint electorates and that seats in central and provincial legislatures be reserved for religious minorities in proportion to their population.[Ref: Bipan Chandra, page 429] and Watch Pratik Nayak’s Youtube Lecture HFS10/P3: Nehru Report, Simon Commission, Jinnah’s 14 Points for more lucid explanation.

Q. Which one of the following statement about the Indigo Revolt of 1859 is correct?(CAPF-2017)

HINT: Leadership for this movement was provided by the more well-off ryots and in some cases by petty zamindars, moneylenders and ex-employees of the planters. A significant feature of the Indigo Revolt was the role of the intelligentsia of Bengal which organized a powerful campaign in support of the rebellious peasantry. It carried on newspaper campaigns, organized mass meetings etc. [Ref: Bipan Chandra, Page 25]

Q. Who was the editor of the journal Indian Social Reformer that was started in 1890?(CDS-2017-ii)

In CSE-2017, lesser-known freedom fighters had been asked. But then again cost:benefit is pure, even if you feel that such ‘trend’ will continue in CSE-2018 as well.

Q. Which one of the following peasant struggles was an outcome of British opium policy?(CDS-2017-ii)

Q. Where is the world’s first Partition Museum inaugurated recently?(CDS-2017-ii)

Q. Who among the following was not a member of the Drafting Committee of the Constituent Assembly?(CDS-2017-ii)

HINT: N. Gopalaswamy Ayyangar, Dr K M Munshi and Syed Mohammad Saadullah were members of the drafting Committee, where was Jurist B. N. Rau was constitutional adviser to the assembly; Rau prepared the original draft of the constitution, and was later appointed a judge in the Permanent Court of International Justice in The Hague.