Observations about Polity MCQs in Prelim-2018 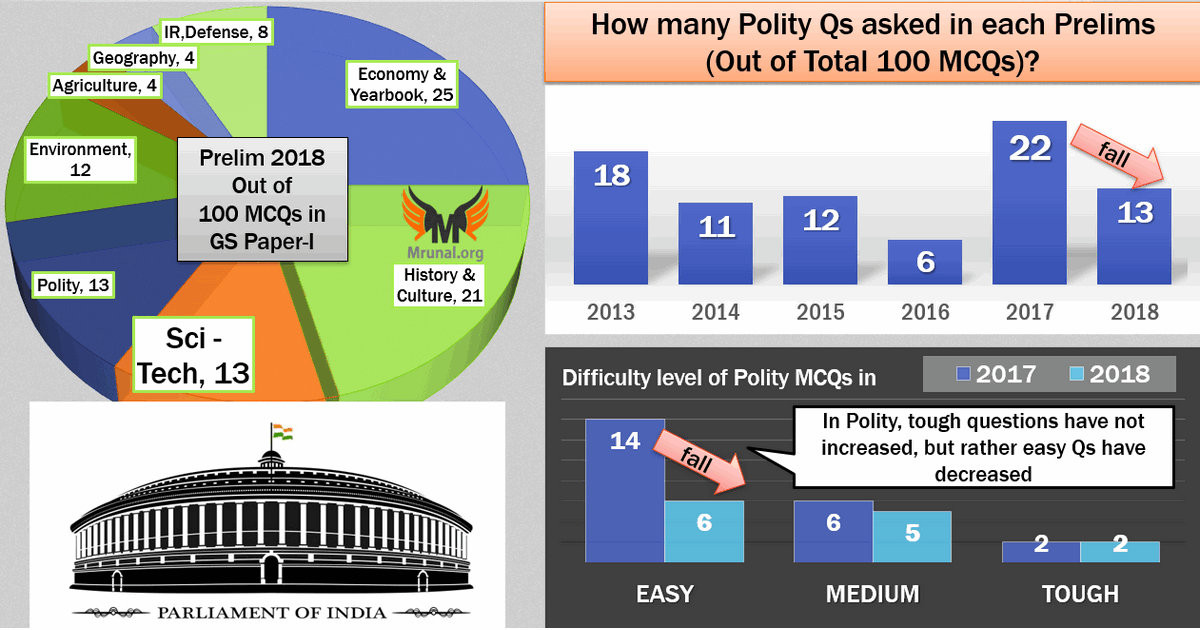 After every prelims and Mains exam, everyone tries to ‘decode’ the mind of the examiner- why did he ask a particular question. So,…

And, this is not to say that “आपको सपना आ जाना चाहिए था की this MCQ will definitely come so, I’ve to prepare this theory because of this current affairs.” Afterall, Triple Talaq was in news but there is no MCQ about Uniform civil code theory, Ahmed Patel vs Amit Shah controversy yet no MCQ on Rajya Sabha election theory! The point is, questions did not fall from sky, all of the Polity MCQs can be solved from routine books and newspapers.

BUT Lengthier paper due to False Pride & Gambling in Polity

Some candidates are complaining that 2018’s Prelim Paper-1 was ‘lengthy’. It’s an interesting complaint- because you’ve to only tick in the OMR sheet, there are fixed number of 100 MCQs, there are no ‘comprehension passages’ or mathematical calculation in Paper-1, then how can paper be lengthy!? 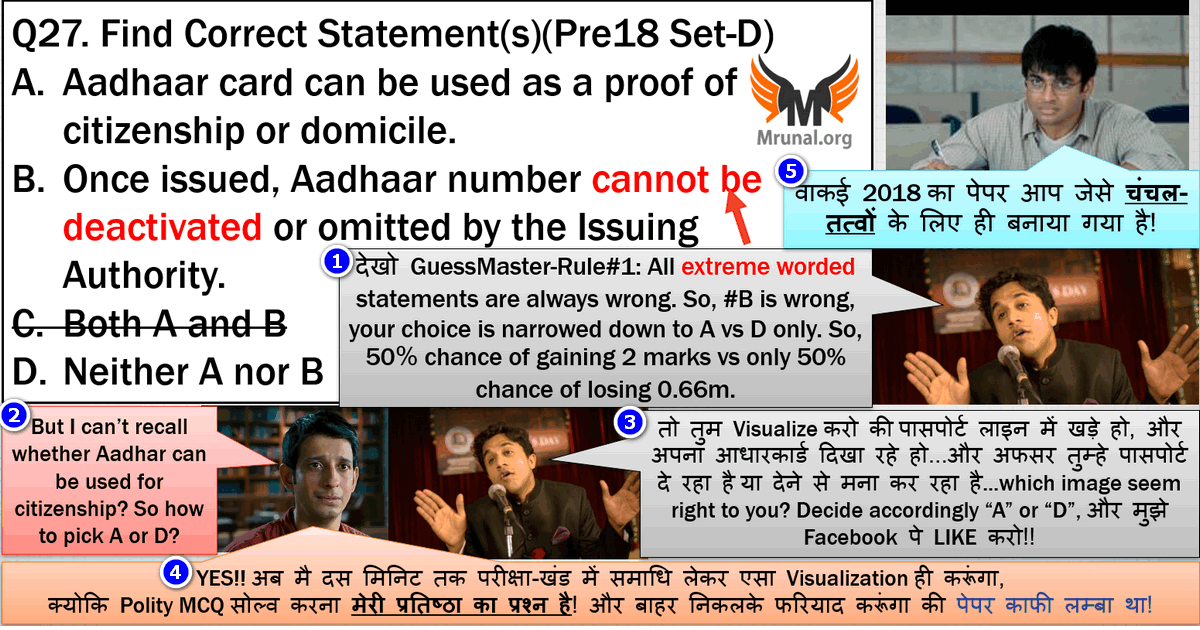 Did it give edge to Political Science Optional?

In recent years, a new trend has emerged within Polity section- examiner asking about abstract concepts / theory which requires some foundation in political science. Observe:

Same continued this year as well:

But in both years, they could be solved from NCERT / NIOS. It didnot require any grand knowledge of political science optional subject thinkers / theories. So, don’t have any regrets about it.
This year, Polity (13 MCQ) plus International Relation (IR: 8 MCQ) = Total 21 out of 100 MCQs = ~1/5th of the paper. In Mains GS Paper-II syllabus again these subjects re-appear.

Polity questions are not falling from sky, or random books. Observe the source of my answerkey for Prelims-2018:

Answerkey for Polity MCQs in Prelim-2018

Q93. In the federation established by The Government on India Act of 1935. Residuary Power were given to the (Pre18 Set-D)

Difficulty: Easy for those who prepared history and polity in a sincere manner.
Answer: Residuary powers were in the hands of Governor General.

Some candidates are engaged in the Hairsplittery that entire MCQ is wrong because correct word is “Viceroy” and not “Governor General”. But if you read original act uploaded on UK Government website, the word was “Governor General” only.

Difficulty: Medium, because every serious player knows #1 is wrong but it all boils down to your knowledge about second statement.
Answer: 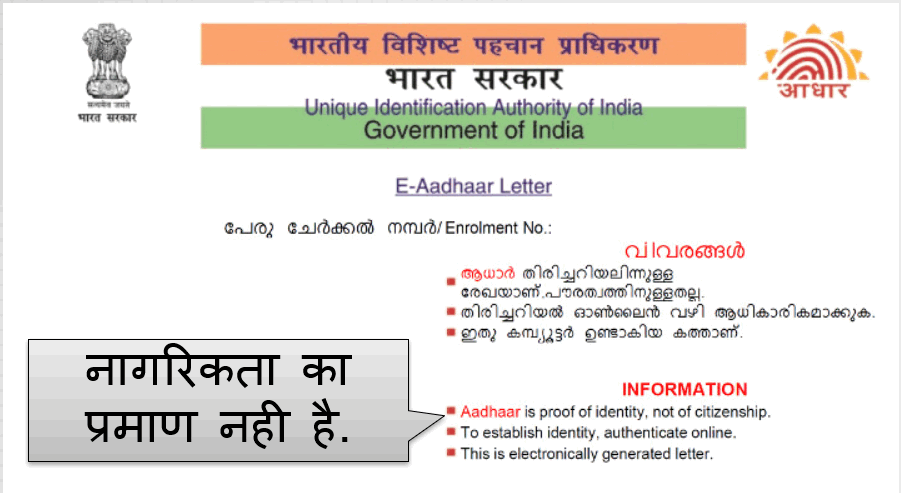 Guessmaster-giriTM can only help narrowing down choices: GM-Rule#1 extreme worded statements are always wrong, so #2 is wrong, your choices are narrowed down between A vs D.

Q77. Right to Privacy is protected as an intrinsic part of Right to Life and Personal Liberty. Which of the following in the Constitution of India correctly and appropriately imply the above statement? (Pre18 Set-D)

Difficulty: Easy, frequently in news due to SC judgement in 2017-August.
Answer: The Supreme Court ruled that “the right to privacy is protected as an intrinsic part of the right to life and personal liberty under Article 21 and as a part of the freedoms guaranteed by Part III of the Constitution” so Option C is right. [Ref: IndianExpress 2017-August]
Let’s also look at the wrong options:

Difficulty: Medium- as such by GM-rule#5 “Word Association”, any one can make a guess that Labor = A (Child) or D (workplace), but you’ve to know the exact factoid. I don’t classify it as tough because answer given in routine prep-source i.e. Yojana वेसे लोग पढ़ते नही है, वो अलग बात है.
Answer: Yojana April 2017 Issue on Labour Welfare, page 31

Some people might classify ILO question under Economy, but I put this one under polity, because it’s about a ‘rights issue’.

Q87. With reference to the election of the President of India, consider the following statements: (Pre18 Set-D)

Which of the statements given above is/are Correct?

Difficulty: Tough because while everyone knows the procedure but here interpretation of the formula is asked. Second statement is vaguely worded and open to multiple interpretations.

No extreme words or figures are given so GM-Rule#1 and rule#2 prove useless.

Topic in news during 2017-April, because in Babri Masjid case, SC exempted Kalyan Singh- the Governor of Rajasthan, on the ground of constitutional immunity.

Anti-GuessmasterTM question because GM-Rule#1: extreme worded statements are wrong, then you’ll think #1 is wrong, but then you’ll end up with wrong answer.

Q65. With reference to the Parliament of India, which of the following Parliamentary Committees scrutinizes and reports to the House whether the powers to make regulations, rules, sub-rules, by-laws, etc. conferred by the Constitution or delegated by the Parliament are being properly exercised by the Executive within the scope of such delegation ? (Pre18 Set-D)

Difficulty: Medium because as such given in the routine books but in real exam stress, candidate can get confused. Even with GM-Rule#5 “Word association”, you’ll still be confused between B or C.
Answer: M.Laxmikanth’s Indian Polity | हिंदी में भी उपलब्ध Chapter 22, Parliament:

Difficulty: Medium because it rests on the interpretation of the second statement, and in real-exam stress, a candidate could have second thoughts about it.
Answer: M.Laxmikanth’s Indian Polity | हिंदी में भी उपलब्ध ch.33 on State Legislature

Guessmaster-giriTM can only help narrowing down the choices: GM-Rule#1: extreme worded statements are wrong, so, #2 ought to be wrong, thus narrowing down choice to A vs D.

Q38. If the President of India exercises his power as provided under Article 356 of the Constitution in respect of a particular State, then (Pre18 Set-D)

Difficulty: Easy given verbatim in routine books / study material for polity.
Answer: M.Laxmikanth’s Indian Polity | हिंदी में भी उपलब्ध Chapter 14, Centre-State Relations and Chapter 16, Emergency Provisions:
The President’s Rule can be proclaimed under Article 356… He can declare that the powers of the state legislature are to be exercised by the Parliament. So “B” is the right answer.

Guessmaster-giriTM can only help narrowing down choices: GM-Rule#1 extreme worded statements are always wrong, so #1 is wrong, your choices are narrowed down between B, C, D. Further gm-rule#2 figures are wrong, then C is wrong, still you’ve to pick between B and D.

Guessmaster-giriTM can only help narrowing down choices: GM-Rule#1 extreme worded statements are always wrong, so #2 is wrong, your choices are narrowed down between A vs D.

Difficulty: Medium, because multiple factoids asked, although I’m not classifying it as tough, since these factoids were available in routine books.
Answer: Answer: (b) 2 only

Since, some people are engaged in Hairsplittery over statement #3, So here is additional references

Guessmaster-giriTM can only help narrowing down choices: By GM-Rule#1 extreme worded statement 1 has to be wrong, so we only have B and C left. But then, gm-rule#2= dates and figures are always wrong, then by that rule statement#2 and #3 should also be wrong but there is no option which says “none of the above”, so ultimately, between B and C, you can’t pick right answer by mere Guessmaster-giriTM.

Q95. Which one of the following reflects the nicest, appropriate relationship between law and liberty? (Pre18 Set-D)

Difficulty: Tough for candidate without political science optional, because he’d feel equally attracted by A and D.
Answer: NCERT Class11 Political Science ch.3 on Equality- it talks about negative and positive library on page26 onwards. But it’s given in a lofty manner without helping directly. Better we look at NIOS Political Science Page 7 onwards, because it has a more crispier explanation than NCERT:

So, as such, both A and B (and even D) seem “appropriate”, but question also asks which one reflects both “appropriate” and “nicest”- OptionB is the nicest of them three.
Q100. Which of the following are regarded as the main features of the “Rule of Law” ? (Pre18 Set-D)