Observations about the Science Qs in Pre18 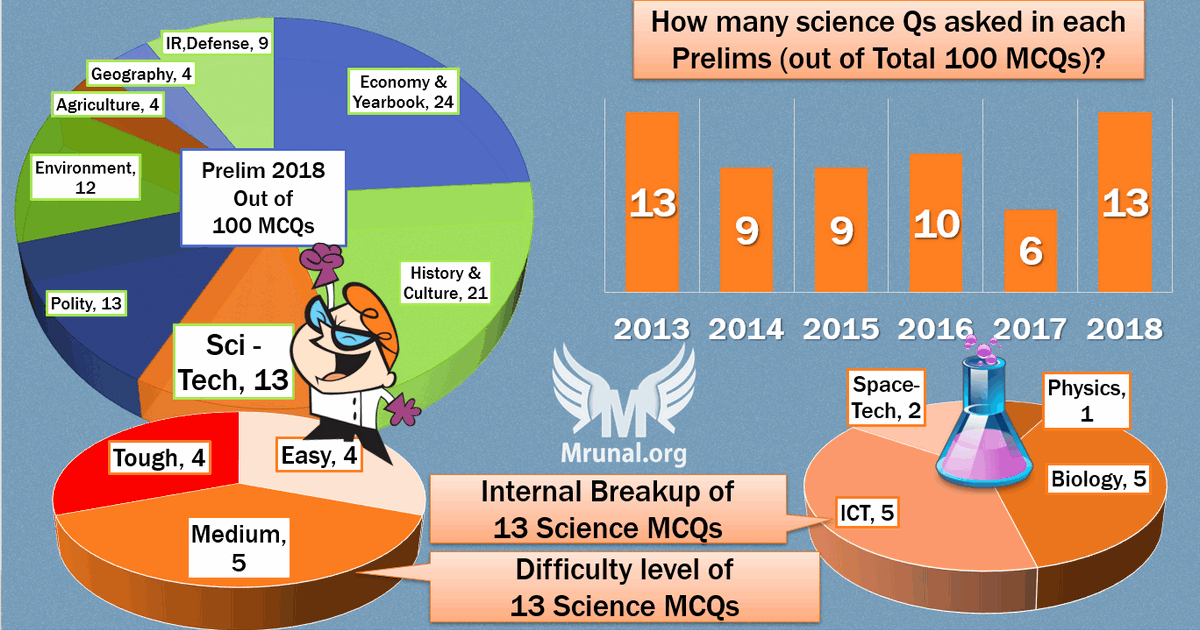 Science was mostly Contemporary & not Current

Should not ignore Science for Prelims-2019

Science theory: How to prepare? 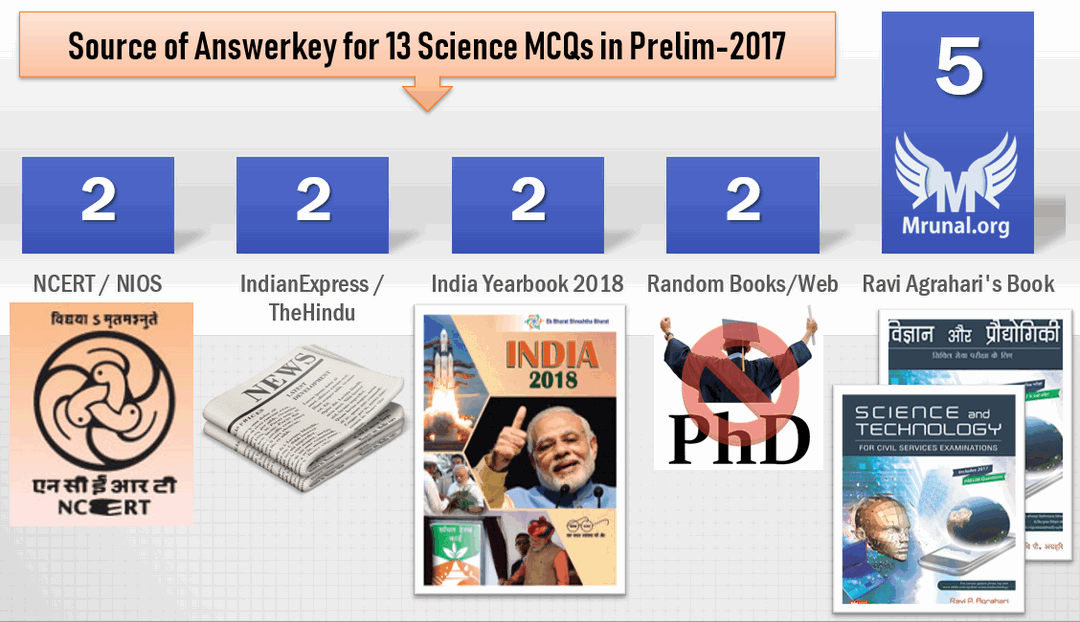 Science-tech Current Affairs: How to prepare?

Current Affairs means one calendar year before the exam (i.e. For Prelims-2019, it’ll be from 1/1/2018 onwards..) For this, you should prepare following:

Science-tech Contemporary Affairs: How to prepare?

Which of the above is/are the prediction/predictions of Albert Einstein’s General Theory of Relativity, often discussed in media ?

Difficulty: Tough because not given in routine study material, Guessmaster-giri not applicable, and most candidates don’t prepare basic-physics related theory / current affairs in this much detail, because it has almost zero utility in the Mains.
Answer:

Some people are doing Hairsplittery that question is not asking what is in that theory, but whether it’s often in news? So, accordingly, either the answer is “B: only 3” or entire MCQ is invalid. But I go with Option D.

Which of the pairs given above is/are correctly matched ?

I could classify that as ICT (because Blockchain is asked) , but since right answer depends on CRISPR-the-GENOME-editing tool, so I’ve put it under Biology / Biotech.

Difficulty: Tough because it ‘tests’ your understanding of the concepts given in Class12 NCERT geography / biology, and in the real-exam stress, difficult to take a call on #3.
Answer:
First statement is right

Difficulty: Tough because in real-exam stress, you’ve to make a call on whether rain can also spread plant disease or not?
Answer:

Guessmaster-giriTM is Possible: GM-rule#4 that in UPSC “3tf MCQ” (3-statement-true/false), IF each individual statement contains barely 1-2 words then all of them are correct. Ofcourse, this MCQ has four statements but the skeleton is similar, so, you directly get the right answer D: 1, 2, 3, and 4; #WITHOUT-STUDYING-ANYTHING.

Difficulty: Medium because you’ve to know specific factual GK that it was developed by Delhi University’s centre. But since it frequently came in GM-related topics in newspapers and magazines during 2016 and 2017, hence not classifying it as ‘tough’.
Answer:

Guessmaster-giriTM is Possible: GM-rule#3 that in UPSC MCQs, Parent organization-walle statements are always wrong, then #3 ought to be wrong and by elimination, we’ve the correct answer B ; #WITHOUT-STUDYING-ANYTHING. (and Statement#1 should also be wrong because it has extreme word “Wide Variety”)

Q17. Which of the following leaf modifications occur(s) in the desert areas to inhibit water loss? (Pre18 Set-D)

Difficulty: Tough because it’s vaguely worded about “leaf modification” and Thorn vs Spine.

Guessmaster-giriTM is Possible: GM-rule#4 that in UPSC “3tf MCQ” (3-statement-true/false), IF each individual statement contains barely 1-2 words then all of them are correct. Ofcourse, this MCQ has statements with more 2 words but still the skeleton is similar, so, you directly get the right answer D: 1, 2 and 3; #WITHOUT-STUDYING-ANYTHING.

Since UPSC has lifted this from old question bank, so they’d have also copied answer from the same question bank, therefore in all likelihood, default answer will be D, until someone raises objection and UPSC admits the mistake of using wrong words thrones/spines- which is very unlikely given their arrogance, although they did admit mistake of setting wrongly worded MCQ once upon a time in EPFO exam.

Q6. When the alarm of your smartphone rings in the morning, you wake up and tap it to stop the alarm which causes your geyser to be switched on automatically. The smart min-or in your bathroom shows the day’s weather and also indicates the level of water in your overhead tank. After you take some groceries from your refrigerator for making breakfast, it recognises the shortage of stock in it and places an order for the supply of fresh grocery items. When you step out of your house and lock the door, all lights, fans, geysers and AC machines get switched off automatically. On your way to office, your car warns you about traffic congestion ahead and suggests an alternative route, and if you are late for a meeting, it sends a- message to your office accordingly. In the context of emerging communication technologies, which one of the following term” best applies to the above scenario? (Pre18 Set-D)

Difficulty: Easy if you’re following the tech-news regularly. Or, if you have common understanding of ICT to know that passage is definitely not talking about BGP, IP, VPN.
Answer: Ravi Agrahari’s Science & Tech Book (Macgrawhill) | हिंदी में भी उपलब्ध ch. 14 Internet (Kindle Locations 9750-9752)
The IoT is the network of physical objects which are accessed through the Internet. Internet of Things (IoT) has a broad scope, a heart patient can do heart monitoring easily, farm animals can be easily sensed with a help of biochip transponder, an automobile that has built-in sensors can alert the driver when tire pressure is low.
Q40. In which of the following areas can GPS technology be used? (Pre18 Set-D)

Difficulty: Easy, by common understanding of what is GPS and creative thinking about how and where it could be used.
Answer:

Guessmaster-giriTM is Possible, if you go by GM-rule#4 that in UPSC “3tf MCQ” (3-statement-true/false), IF each individual statement contains barely 1-2 words then all of them are correct. Thus, you directly get the right answer D: 1, 2 and 3; #WITHOUT-STUDYING-ANYTHING.

Q43. The terms ‘Wanna Cry, Petya and Eternal Blue’ sometimes mentioned in the news recently are related to (Pre18 Set-D)

Difficulty: Easy, if you’re following any newspaper – because Wannacry / Petya ransomware was in news during 2017-May / June.
Answer:

Guessmaster-giriTM is Possible, if you go by GM-rule#4 that in UPSC “3tf MCQ” (3-statement-true/false), IF each individual statement contains barely 1-2 words then all of them are correct. Ofcourse, this MCQ has five statements but the skeleton is similar, so, you directly get the right answer D: 1, 2, 3, 4 and 5; #WITHOUT-STUDYING-ANYTHING.

Difficulty: Medium. You’ve to know the meaning of Open API. I don’t classify it as ‘tough’, because the meaning is given in India Yearbook 2018.
Answer: Open Application Programming Interfaces (APIs): This is government’s approach to promote software interoperability for all e-governance applications and systems and provide access to data and services for promoting participation of all stakeholders including citizens. [Ref: IYB Ch. 8 on Communication]
From above description, it appears that open API is a concept like ‘open source technology’, anyone can use the code to develop apps / portals / software. We can further refine our understanding using Electronics Ministry’s Policy on Open API. An Open API has following characteristics:

Counter-argument: These features are lifted Verbatim from Nandan Nilekani’s Blog in TimesofIndia in 2016, where he said, ” Aadhaar provides open Application Programming Interfaces or APIs, which can be integrated easily into any electronic device. These APIs enable online authentication using a fingerprint or iris.” Therefore both statements are right (Option C).

GM-Rule#1: All extreme worded statements are wrong. so, first statement has term “any device” so it must be wrong, But since it’s a disputed MCQ- either both are right or both are wrong. So, whether Guessmaster-giri was helpful in this Question? Can’t say until official answerkey is released by UPSC.

Difficulty: As such every serious aspirant knows about IRNSS is our DESHI-GPS, but in real exam, quite possible that you’ll get confused over how many stationary vs synchronous satellites does it have? Topic was in news from 2013 to 2016. Afterwards, last two years’ India Yearbooks – 2017 and 2018, are mentioning this topic but not covering the specific factoids asked here. Considering all facets, I classify it as medium to tough MCQ (Multi Choice Question).
Answer: Ravi Agrahari’s Science & Tech Book (Macgrawhill) | हिंदी में भी उपलब्ध Ch.10 (Kindle Locations 6736-6737)

ANTI-Guessmaster question. If you go by GM-rule#2 that in UPSC MCQs, all statements with dates, numbers, figures are usually wrong, then here all three statements contain figures- Even first statement has figures (4) and (3) so answer should be “D:NONE”- but that’s a wrong answer.

Which of the statements given above is/are correct.?

Guessmaster-giriTM is possible, to an extend

Stay tuned for the remaining parts of the Answerkey. You can get free email updates whenever I post new article, by filling up this form.

I neither encourage nor condone shortcuts / hacks / cheatcodes for success in exams. The purpose of using the term Guessmaster-giriTM with Hashtag #WITHOUT-STUDYING-ANYTHING = It’s my wishful thinking that UPSC examiner will take a note of this nuisance going on in recent years, and will stop such opportunities in the future exams, and if that doesn’t happen- atleast everyone should benefit from this knowledge.