Answer each of the following case study for 250 words x 20 marks. 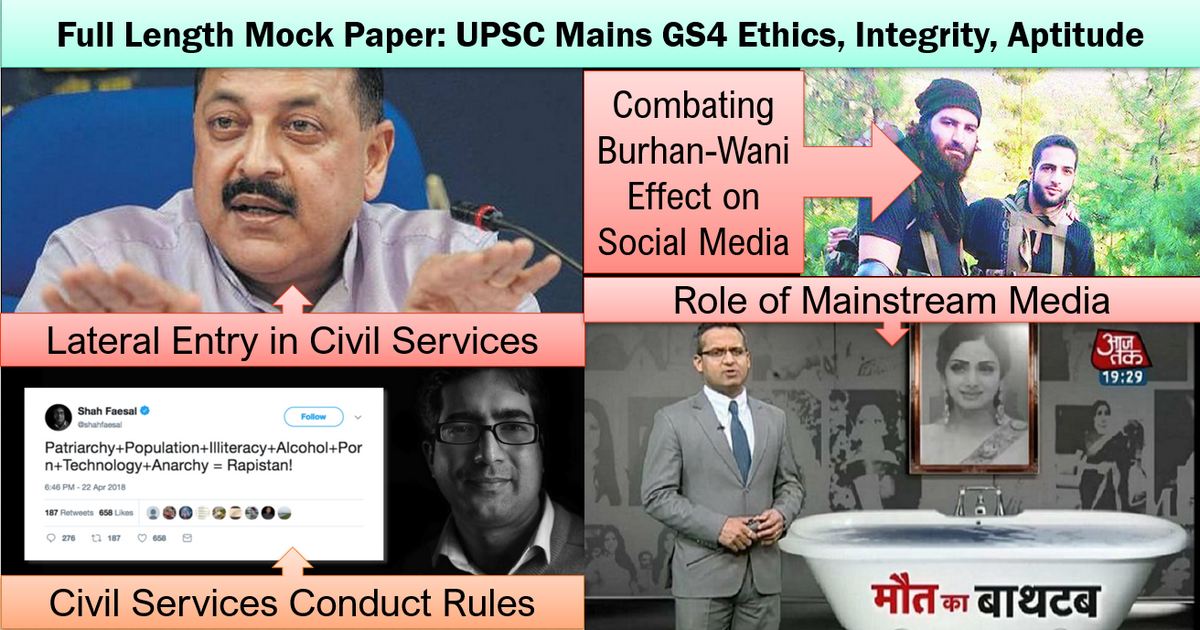 “Burhan Wani, a young Kashmiri man, joined militancy in 2010 and started uploading photos on social media. He made militancy, an otherwise underground phenomenon, visible to people and lent reality-show like drama to a militant’s obscure life. The image of a young man with AK-47 emerging from the lush picturesque hills held a powerful appeal for the new Kashmiri generation that hadn’t experienced the horrors of kidnapping, extortion and murders committed by the terrorists in the ’90s. Burhan Wani’s social media propaganda gave a false moral glamour to militancy in the young minds. After his death in 2016, terrorists are portraying Burhan as a martyr and a saint using the social media, which is attracting even more Kashmiri youth to join militancy.” says an Indian Army officer dealing with counter-insurgency operations in J&K. As the Collector of a militancy-ridden Pulwama district in Kashmir, how will you counter this “Burhan Wani” effect?

After the untimely death of Bollywood actress Sridevi in a Dubai hotel, Indian news channels have resorted to gross sensationalism to boost their TRPs. ABP News had an anchor standing in front of a bathtub with a large goblet of wine. He asked, “Why did Sridevi drink that day? Did she drink because of family problems? Was she stressed about the end of her career? Was she depressed?” Aaj Tak ran a 30 minutes show titled, “Maut kaa bathtub”, while another news channel organized a panel discussion on the subject ‘Sridevi ka Aakhri Dance: Death by excessive number of cosmetic surgeries?”

From Jessia Lal, Arushi Talwar, Sunanda Pushkar to Sridevi- women’s death is used for higher TRPs through insensitive, voyeuristic and sensationalistic news coverage (असंवेदनशील, दृश्यरतिक और सनसनीखेज समाचार). As the Minister for Information and Broadcasting how will you address this issue?

A noted cricketer’s wife has accused him of domestic violence and adultery. The charges are denied by the cricketer. But, some cricket fans have organized a twitter campaign demanding the BCCI to drop this person from the Indian cricket team. As the chairman of BCCI, examine the merits and demerits of succumbing to the demand of online cricket fans in this case. What will be your ultimate decision?

A six-month-old girl was found crying in a heap of garbage near the Moradabad highway. Locals sent her to the state-run orphanage in Rampur. To adopt this girl, interested family has to file online form with the Central Adoption Resource Authority (CARA). Three families have expressed keen interest to adopt this girl. (गोद लेना)

As the officer at CARA with the discretionary powers to accept any of these three petitions, whom will you hand over the baby’s custody? And why?

An NCC cadet, Tapan Sen, has sent following petition to the Department of Personnel & Training (DoPT)- “NCC Cadets spend three years of their life with an ambition to become an officer in defense or police. They sacrifice college life of fun & leisure to attend various local, state and national camps. They get rigorous training in discipline, leadership and physical fitness. While there is quota for sportspersons in the recruitment of defense, railways and public sector undertakings, no such a separate quota exists for us. Therefore, I request you to create separate quota for NCC cadets in government jobs, failing which, we will organize a mass protest across the country.” As the Secretary (DoPT), how will you address this petition?

Under the rules of Olympic Games, only accredited sportspersons and their trainers are allowed in the Olympic games village. However, a young badminton star from India is adamant to have his father stay with him in the games village. At the last minute, he has threatened to pull out of the tournament, if his demand is not met. There is no replacement player available to represent India in his absence. As the Secretary of the Indian Olympic Association (IOA), you could make a namesake ‘deputy-coach’ i-card for his father so he can stay in the Olympic-village. Will you do it? Justify your stand with respect to the urgency of the situation (परिस्थिति की अविलंबिता) versus the sanctity of the rules (नियमों की पवित्रता).