Q. Who among the following had hailed Subhas Chandra Bose as “Deshnayak”?

Q. Who was Laxmi Sehgal?

HINT: It was Bina Das from Bengal who fired at Governor of Bengal Stanley Jackson while receiving degree. Bina Das was sentenced to nine years of imprisonment and nicknamed “Agnikanya”.

Q. In 2018-Oct, Supreme court stayed the NGT order which had approved the Char Dham highway project. This project aimed to connect which of the following sacred sites?

HINT: The purpose of Exercise IOWave18 was to evaluate and improve the effectiveness of Tsunami preparedness in Indian Ocean. 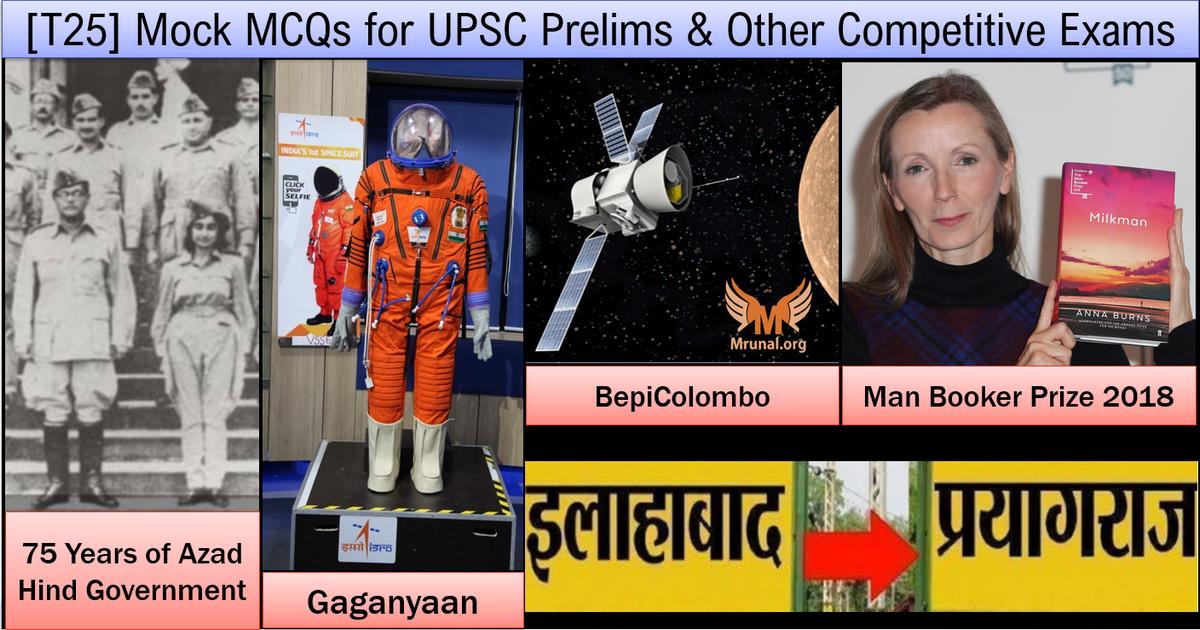 Q. In 2018-Oct, a spacecraft named BepiColombo was launched. Find incorrect statements about it:

Q. From December 1, 2018, “Drone Regulation 1.0” will become effective. Find correct statements about it:

Q. In 2018-Aug, India and Pakistan participated in an anti-terrorism military exercise of Shanghai Cooperation Organization (SCO). Find correct statement(s) in this regard.

HINT: SCO includes Russia, China, Kyrgyz Republic, Kazakhstan, Tajikistan and Uzbekistan. India and Pakistan were added in 2017. “Peace Mission” was held in Chelyabinsk city in west-central Russia. It was for the first time since Independence that India and Pakistan both were part of a military exercise. Hence all three are correct.

Q. In 2018-Aug, India had opened land immigration check-post at Zokhawthar. It’s situated in _ _ _ state and connects India with _ _ _ country.

Q. In 2018-Oct, USA announced to withdraw from Intermediate-range Nuclear Forces treaty (INF). USA had signed this INF-treaty with _ _ _ .

Q. In 2018-Sept. Union Ministry of Health and Family Welfare released draft charter of Patients’ Rights. In this regard which of the following statements are correct? (GPSC-2018)

HINT: All three statements are correct.

Persons and Places in News

Following MCQs are more important for Non-IAS exams, than for UPSC Prelims.

Q. In 2018-Oct, UP government changed the name of Allahabad to Prayagraj. This city is known for

HINT: For faster revision, all correct.

Q. In 2018-Oct, the disturbing news of the assassination of a prominent journalist Jamal Khashoggi came. Even USA and G-7 nations expressed concerns. He belongs to _ _ _ country.

HINT: Prominent Saudi journalist who is critique of their Sultan. Believed to be murdered in Turkey. He was working with The Washington Post.

HINT: For ICICI: Mr. Sandeep Bakhshi (CEO & MD). Whereas for Axis Bank: Amitabh Chaudhry (MD & CEO). Both Chanda and Shikha have been forced to leave their respective banks due to controversies regarding their performance. RBI approved Sandeep Bakhshi (ICICI)’s appointment in 2018-Oct, hence in news.

HINT: Paul died of cancer, he had founded Microsoft with Bill Gates.

Q. Which of the following book has won Man Booker Prize 2018?

HINT: Booker prize is an annual British award for novel in English.

Q. Yuval Noah Harari is an Israeli historian. He has not authored following book: