Q. In 1946, Indian sailors in the Royal Indian Navy mutinied against the British Officers. What was Sardar Patel’s stand on this “RIN Mutiny”?

HINT: In RIN Mutiny, socialists like Aruna Asaf Ali sympathised with the rebels. Gandhi disapproved. Vallabhbhai Patel asked the sailors to surrender because British forces had gathered in large number in Bombay to exterminate the Indian sailors and even commit atrocities against ordinary Indians. Besides, he felt that “discipline in the Army cannot be tampered with. We will want Army even in free India”.

Q. During Bardoli Satyagrah, Gandhi and Sardar Patel tried to mobilize the “Kaliparaj” people against the British. Who were “Kaliparaj”?

HINT: In Bardoli taluq, low-caste untouchable and tribal inhabitants were known by the name of Kaliparaj (dark people) to distinguish them from the high caste or Ujaliparaj (fair people).

HINT: He was a multi-tasker.

Q. At the time of independence, there were 562 princely states in our country. Sardar Patel successfully merged them with India. Among these states, _ _ _ was the first to join and _ _ _ was the last to join Indian Union.

Q. Sardar Patel became President of Congress session in 1931 in Karachi. This session was concluded with resolution(s) on:

Q. In 1948, Sardar Vallabhbhai Patel became a member of the JVP Committee. Find correct statement(s) about it:

HINT: JVP committee consisting of Jawaharlal Nehru, Vallabhai Patel and Pattabhi Sitaramaih was appointed by the Congress Party (1948) to look into the linguistic reorganization of States. This committee also did not favour for linguistic provinces.

Q. Before Bardoli Satyagrah (1926), Vallabhbhai Patel had participated following Satyagrahas. Which of the following was / were not caused by Agrarian issues?

Q. Government of India celebrates April 21 every year as ‘Civil Services day’ because

HINT: This date is chosen to commemorate the day when first Home Minister of Independent India, Sardar Vallabhbhai Patel addressed the probationers of Administrative Services Officers in 1947 at Metcalf House, Delhi, he referred to civil servants as the ‘steel frame of India’. The first Civil Service Day function was held in Vigyan Bhawan, New delhi 21 April 2006.’

Q. Which of the following statements regarding The Charter Act of India (1813) are correct? (GPSC-Pre-2018)

Q. Who abolished the use of Persian as court language and ordered the use of Vernacular Languages? (GPSC-Pre-2018)

Q. Which of the following statements are correct with reference to the Theosophical Society? (GPSC-Pre-2018)

HINT: This is a poorly framed question by GPSC, because statement number 4 is common in all four options, so what’s the point is putting it! Secondly, it’s a vaguely worded question because statement-1 says Olcott was “English” (=British) officer, whereas he was an American officer. So, depending on how you interpret first statement, the answer could either “Only 2, 3 and 4” or “1, 2, 3 and 4”. Sometimes UPSC also frames vaguely worded statements so this is just to give you a taste of things.

Q. Find incorrect statement(s) about the Statue of Unity, presently the tallest statue in the world (182 meters): 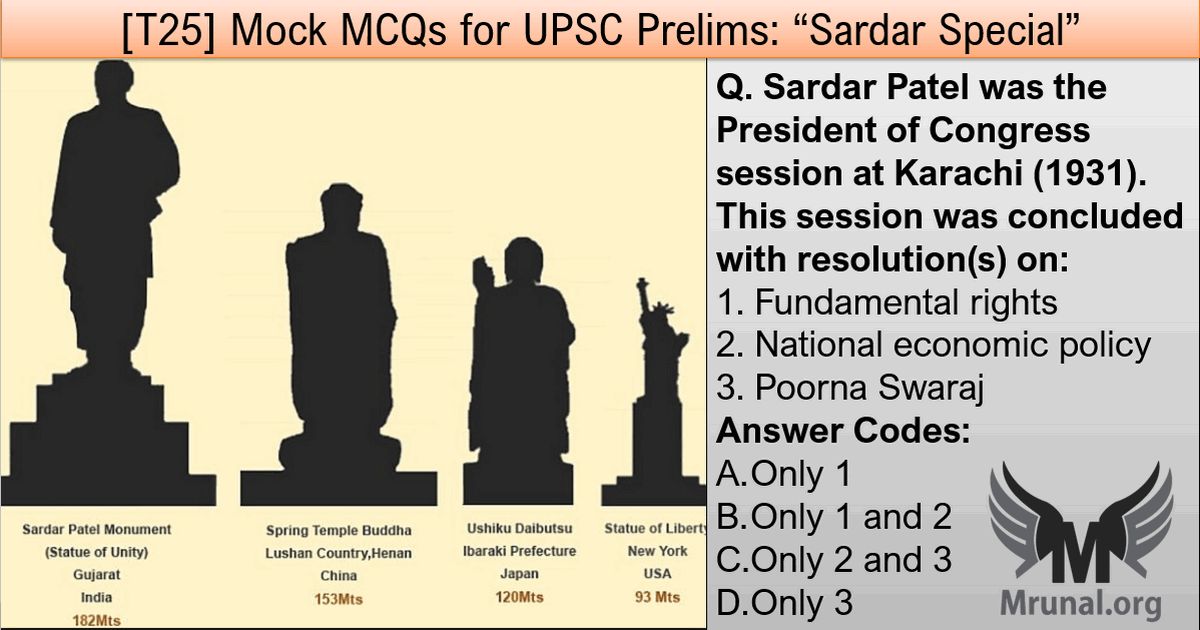 Q. The Ainnurruvar (five hundred swamis of Aihole) were the most celebrated _ _ of southern India. (GPSC-Pre-2018)

HINT: Bolo, Gujarat PSC also wants to show swag like UPSC so they’re asking about such random terms from Medieval history which are not given in routine history books. But they forget that rapper Badshah can never take place of Yo Yo Honey Singh. Anyways, the Ainnurruvar was a Merchant Guild of Tamilnadu.

Q. Which of the following statements regarding Rajendra Chola-I are correct? (GPSC-Pre-2018)

HINT: This is also a poorly frame MCQ by GPSC because each option contains statement1 so it ought to be correct. Anyways according to Tamilnadu Class11 Textbook, Rajendra-I’s father Rajaraja-I completed the construction of the famous Rajarajeswara temple or Brihadeeswara temple at Tanjore in 1010 A.D.

HINT: When it comes to framing questions from Buddhism and Jainism, UPSC examiner goes crazier than usual. Kanishka patronized Buddhist scholars like Vasumitra, Asvagosha and Nagarjuna. He also convened the Fourth Buddhist Council. The famous physician of ancient India Charaka was also patronized by him. Ajja Chandana was a female jain monk.

HINT: Given in NIOS Culture PDF.

Q. Kalaripayattu is one of the Oldest martial arts in India, originated in Kerala. What is the meaning of “Kalari”?

HINT: It can be called a coaching class also.

HINT: According to Britannica

Q. Karnataka’s Vesara school of temple architecture is a hybridized style of _ _ and _ _ schools.

HINT: Nitin Singhania book says Vesara School: Also known as the Karnataka school of architecture, it was conceptualised under the later Chalukya rulers in the mid-seventh century A.D. It combined features of both Nagara school and Dravidian school and resulted in a hybridised style.

Q. Find correct pairs of the painting school of Rajasthan and their main themes:

HINT: Nitin Singhania book says Pandavani folk music is based on the grand epic-Mahabharata and Bhima as hero. It is all inclusive of gayan (singing) and vadan (playing an instrument). Usually the songs are set to the rhythm of a tambura. One of the most well known artists is Tijanbai from the state of Chhattisgarh who won the Padma Shri and the Padma Bhushan for her contribution to this musical field.

HINT: Atrangi (Crazy) Question not given in Nitin Singhania, and you’re not expected to secure 100% marks to clear prelims. Answer is Mandovar.