Instructions for 25 Mock MCQs for UPSC: Set No. 28

Q1. The Fourteenth Finance Commission assigned different weight to the following parameters for distribution of tax proceeds to the States : (UPSC’s-CDS-ii-2018) 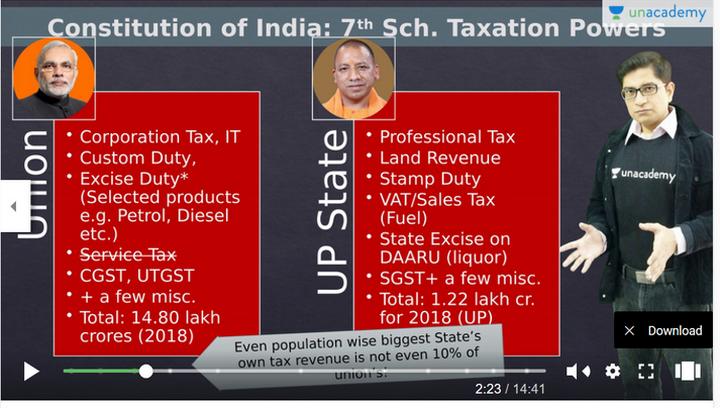 HINT: Aaykar means income tax, so it can’t be GST (option 1) or import-export (option 4) which are associated with indirect tax. “Setu” is the Sanskrit word for “Bridge” in a positive sense, so it can’t be about “Tax defaulters”. And yes, it’s an app

Q3. Who among the following is the Convener of the ‘Task Force’ set up in November 2017 by the Government of India to review the Income tax Act and draft a new direct tax law? (UPSC’s-CDS-ii-2018)

HINT: During the Rajaswa Gyan Sangam held on 1st and 2nd September, 2017, the Prime Minister Shri Narendra Modi had observed that the Income-tax Act, 1961 (the Act) was drafted more than 50 years ago and it needs to be re-drafted. So, Finance Ministry setup a task force with Arbind Modi as convener, he’s a member of the CBDT.

HINT: National Anti-profiteering Authority (NAA) is setup to take action against businessmen who’re not passing on goods and services tax (GST) rate cut benefits to customers. It can impose penalty, which goes to Consumer welfare Fund as per the Central GST Act. GST compensation fund is separate thing- which is filled by imposing special compensation cess on coal, demerit and luxury goods such as tobacco, cigar, pan masala, Aerated drinks and motor vehicles.

Q5. According to the latest Reserve Bank of India study on State finances, capital spending is maximum on (UPSC’s-CDS-ii-2018)

HINT: The report was published in 2018-July and announced in both Hindu and Indian Express but neither dissected above information, and even if they had, who has time to memorize all these things. However, you could make logical guess that Budget-2018 was “Rural-India centric” keeping in mind the 2019’s General Elections, so state Governments too ought to have made similar strategies by focusing more on rural area. Anyways, crosscheck numbers from original report

For the year 2018-19, the States’ capital expenditure on Rs. billion is as following

Q6. Statement I : The overall fiscal deficit of the States in India during 2017-2018 stayed above the FRBM threshold level of 3 percent for the third successive year. Statement-II: Special Category States had run up a higher level of fiscal deficit in 2017-2018 compared to 2016-2017 (UPSC’s-CDS-ii-2018)

Q7. The two defence industrial corridors announced by the Finance Minister in his 2018 Budget speech are coming up in which of the following States? (UPSC’s-CDS-ii-2018)

HINT: The 2018-Feb’s budget speech itself doesn’t mention which states exactly. But later it was revealed that Tamilnadu and Uttar Pradesh will get these corridors.

Q8. As per the extant policy, Foreign Direct Investment is permitted in the defence sector under the automatic route up to which one of the following limits? (UPSC’s-CDS-ii-2018)

HINT: While the Draft defence production policy aims to raise FDI cap to 74% but as per the extant (i.e. present) FDI policy, permits only upto 49% FDI in defense sector through automatic route.

Q9. The tagline ‘Invaluable Treasures of Incredible India’ is associated with the logo for (UPSC’s-CDS-ii-2018)

HINT: It was held in Papa’s capital Port Moresby. Ended without any joint statement just like WTO’s Buenos Aires summit 2017. India not an APEC member, so how can it attend!? 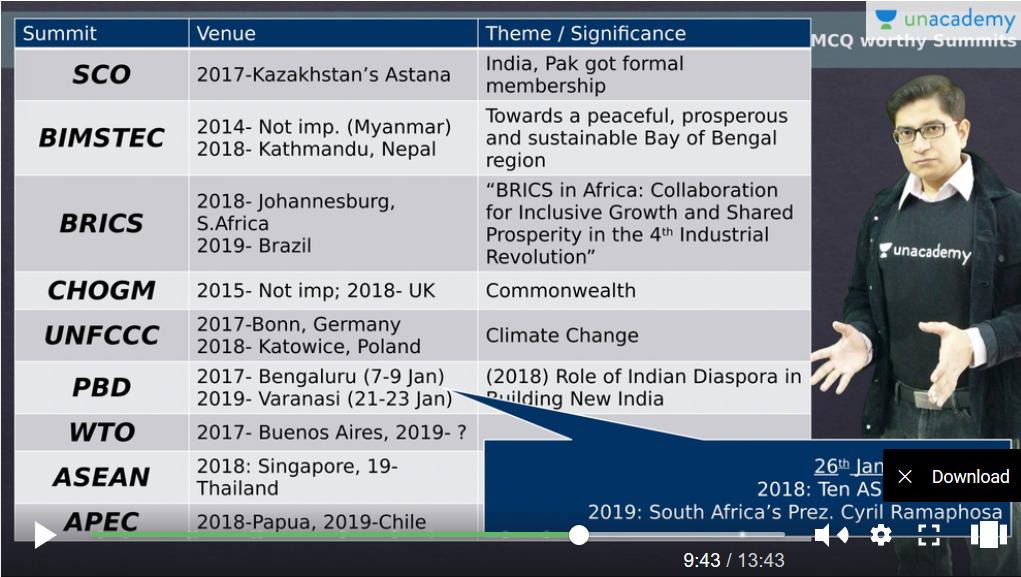 Q11. Which one of the following was not a part of the strategies followed by the Government of India to increase food grain production in India immediately after independence? (UPSC’s-CDS-ii-2018)

Q12. Statement I : Agriculture in India still accounts for a substantial share in total employment. Statement II : There has been no decline in volatility of agriculture growth in India. (UPSC’s-CDS-ii-2018)

Q13. With regard to the cabinet decision in July 2018, the percentage increase in Minimum Support Price (MSP) is maximum in which one of the following crops? (UPSC’s-CDS-ii-2018)

HINT: Who prepares in this much detail. I’ve already mentioned the hike in the options itself. Madhya Pradesh is prominent in Soya bean cultivation and election is approaching so if you guessed that Government must have given very large hike in Soya MSP for farmers vote bank… well you’re mistaken. 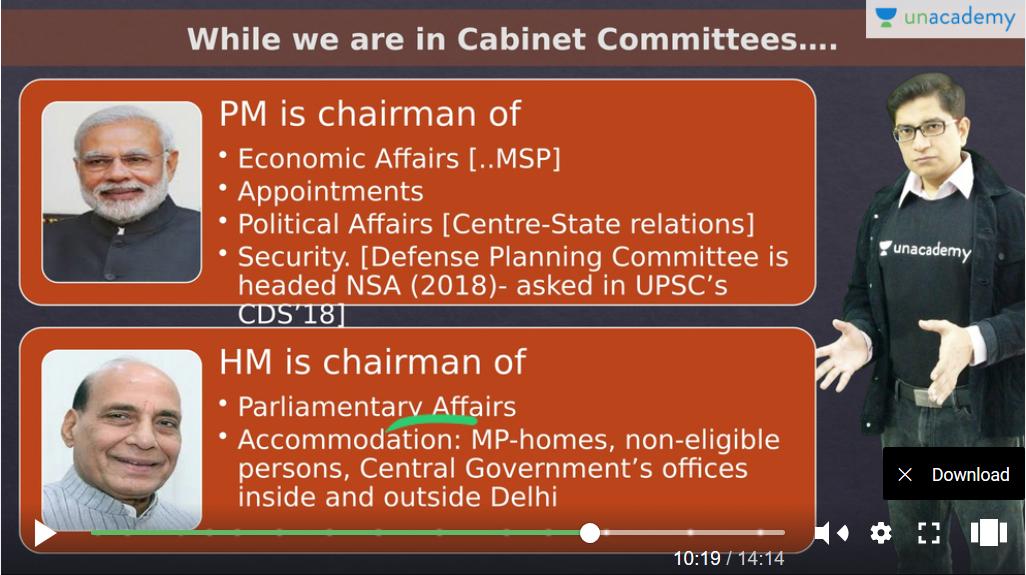 Q14. According to the World Bank’s Doing Business Report, 2019, India’s ranking has improved in in which of the following areas compared to previous year? (inspired from UPSC’s-CDS-ii-2018)

HINT: UPSC examiner knows that all serious candidates have mugged up that India secured 77th rank and New Zealand secured first rank and Somalia secured the bottomest 190th rank in World Bank’s EoD report. So, as a token of sadism, he has asked for individual components. If you try to guess that GST must have improved the #1 and Insolvency-Bankruptcy code must have improved #2 then you’re sadly mistaken. Ref: Biz Standard 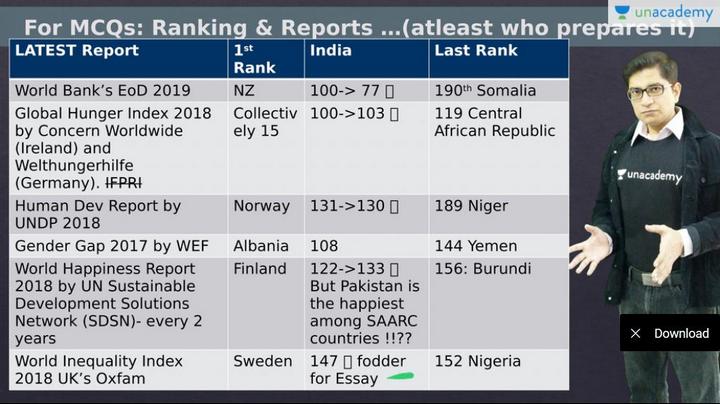 Q15. According to the updated World Bank data for 2017, India is the sixth biggest economy of the world (in terms of GDP). Which one of the following is not ahead of India? (UPSC’s-CDS-ii-2018)

Q16. Statement I : Private Investments in research have severely lagged public investments in India. Statement II : Universities play a relatively small role in the research activities of the country. (UPSC’s-CDS-ii-2018)

Q17. The natural rate of unemployment hypothesis was advocated by (UPSC’s-CDS-ii-2018) 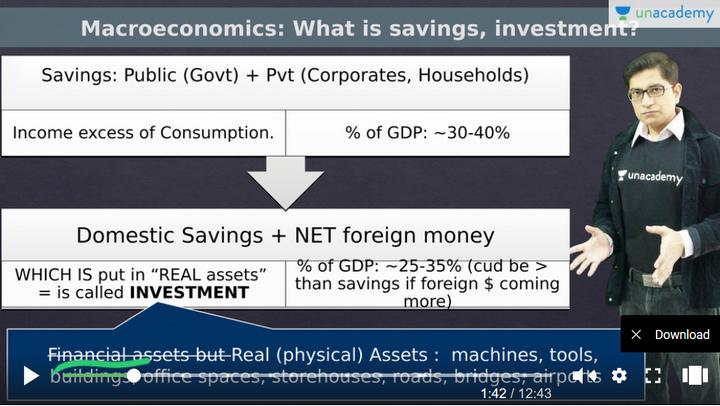 Q19. The headquarters of Metro Railway Zone is located in (UPSC’s-CDS-ii-2018)

HINT: “New Delhi has metro so it ought to be the Metro Railway Zone” such guessmasters should buy Iodex for their broken backs because IYB Ch.26 on Transport gives a list of 17 Railway zonal HQs. Kolkata is Zonal Railway HQ for Eastern, South Eastern and Metro.

Q20. Under the PRASAD Tourism Scheme, which one of the following has not been identified as a religious site for development? (UPSC’s-CDS-ii-2018)

In UPSC’s-CDS-ii-2018, UPSC mostly focused on “data interpretation’ related MCQs from economy. This is continuation of the trend observed in CSE-2018 Prelim as well.

HINT: In 2014, HRD Ministry launched Study Webs of Active-Learning for Young Aspiring Minds (SWAYAM). So, think which term fits? Here is a list of similar noted Government schemes for higher education in my lecture. 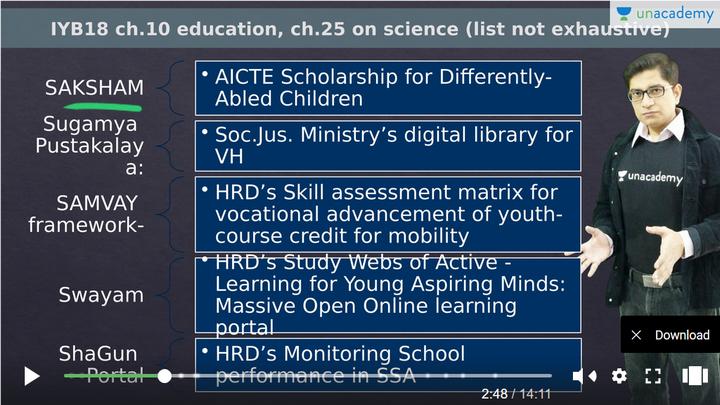 Q22. Which one of the following is the correct ascending sequence of States with regard to percentage of urban population (2011)? (UPSC’s-CDS-ii-2018)

If you try guessing here that Mizoram is a North East state so it could be lowest in urbanization and then you could jump to answer 4 then you’re in for serious shock. Let’s find the official state-wise urban population data from Census-2011. IYB has not given it. While NCERT India-People and Economy has appendix containing urban population table, but it’s outdated data of Census-2001, even in the latest edition. Time to look into Majid Hussain’s Geography of India page 14.31.

Q23. Which one of the following is the correct ascending sequence of States in terms of their population density as per Census 2011? (UPSC’s-CDS-ii-2018)

Number of people living in per square km area is called Population Density. Arunanchal Pradesh has lowest population density. This is given in NCERT Geography and all GK books. So, correct answer could be 1, 2 or 4. And within them, Himachal could have more density than North Eastern States- if we go by that logic then Answer could be 1 or 2. It’s unlikely that you know the exact population density of Sikkim Vs Mizoram so, you could do guess-mastergiri and pick either one from 50:50 coin toss or just skip this question. You could further guess that Sikkim is the ‘first organic farming state of India’, so they could have more thriving economy compared to Mizoram, and hence attracting more migrants, then it’d have more population density than Mizoram. Anyways, Let’s crosscheck the exact numbers from IYB-2017 Table 1.4 in chapter1, because in IYB2018 they’ve removed such census tables (atleast in the Kindle Edition).

HINT: Economic Survey 2016-17 had mentioned that Total Fertility Rate is declining in the coastal states, hence they’ll have to rely on migrants from interior states in the future decades when their own population starts to grow old. But, here all four are costal states so it doesn’t help making any logical eliminations. At most you could go by gut feeling that Kerala and Goa are not ‘migrant-attracting big states’ so, unlikely they could have absorbed new families who produced more kids. So, answer could be Andhra Pradesh or Tamilnadu. So, we’ve to find the exact numbers from IYB-2017 Table 1.1 in chapter1, because in IYB2018 they’ve removed such Census tables (atleast in the Kindle Edition).

PS: you don’t have to buy IYB17, just go here on this link and click on book cover’s“look inside”, ch1 is given in the free preview!

HINT: You can make logical guesses about the composition by looking at the socio-political undercurrents. For example, W.Bengal parties is more keen to please the Muslims so they could have a sizable percentage. Uttar Pradesh is stronghold of BSP but in Punjab, the ‘Dera culture’ is more prominent because of sizable schedule castes. So, it has to be either UP or Punjab, but since UP has very large total population than Punjab toh UP mein SC % down ho jaayegaa. Therefore, Punjab should be the answer. Let’s find the exact numbers from IYB-2017 Table 1.13 in chapter1, because in IYB2018 they’ve removed such census tables (atleast in the Kindle Edition).