In the fond memories of Dev Anand,

What’s the difference between Single brand vs Multibrand retail?

· This is single brand retail.

· But neither the Political parties nor Local Kiranawala raised any voice against this,why? Because these are ‘high-end’ luxury items for brand
conscious upper middle class and rich class people. It doesn’t hurt population at large. It was not like people would stop purchasing from local
garment store to get Nike or Adidas.

· So this is multi-brand retail: when an outlet sells a product (tshirt, tie, shoes anything) of more than one brand. 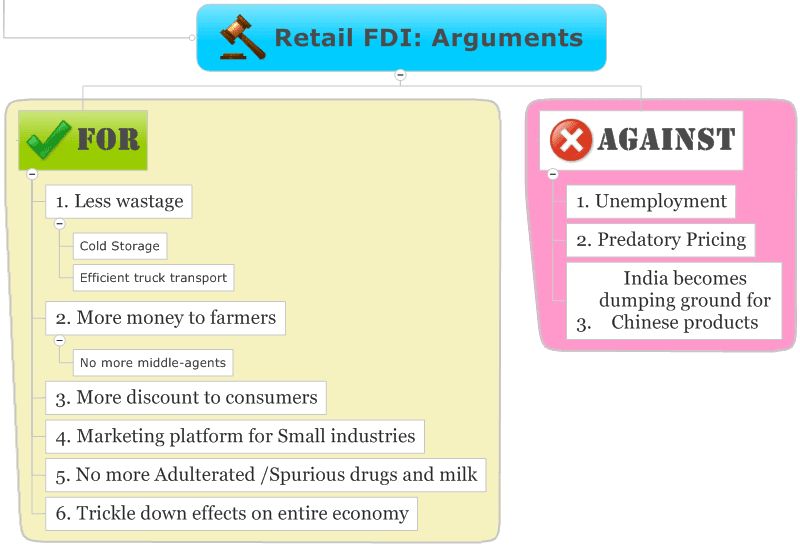 Anti #1: will lead to mass-unemployment

3. What should be done? Obviously one of the two sons ought to get himself in other sector (service, construction, manufacturing, industry, etc) But
there is lack of opportunities, the manufacturing sector is not growing at the pace. So the argument=: Displaced retail-operators will not be absorbed
in other sectors. This FDI will lead to unemployment.

Although this “unemployment” argument is flawed because

1. Walmart cannot open malls in every nook and corner of India. Their electricity, staff and security costs will surpass their profit margins.

2. Customers can’t goto Walmart on daily basis for ‘attractive discounts’ because the petrol cost (and time wasted in traffic) will negate the discount
on small purchase. So they’ll be using local small-retailer for daily requirements of bread, milk, newspaper etc.

3. Did STD booth-operators become unemployed after advent of mobile phones with zero roaming charges and free incoming? Nope, they diversified and
started running Xerox and cybercafés.

4. Did local Udipi owner ran out of business because of McDonald / KFC? Ofcourse not.

· Walmart or any other MNC retail mall, for the first 3-4 years they’ll give heavy discounts and seductive offers, even if they make loss in the deal.
Result : all the customers in a particular city are hooked to walmart only.

· The smalltime retail players cannot run business giving such heavy discounts, they close down. Once all competition is eliminated with this
‘predatory pricing’ Walmart will slowly stop giving discounts and recover their losses by increasing the MRP.

· Since these big MNCs have deep pockets, they can affort this sort of loss. But in the long term, they recover everything.

· Same way Once the small time retailers are out of business, Wal-Mart will start exploiting farmers, paying them extremely low money for their produce, because
now Wal-Mart is the sole retailer in the city.

counter arguments: ‘Predatory pricing’
1. Customer thinks of Traffic, time and petrol cost involved before visiting Walmart everynow and then. Not like someone would go 10 kilometers, just
because the mall is giving Rs.3 discount on apple juice.

2. There is a Competition Commission of India to look into this matter. (earlier MRTP, Monopoly and restrictive trade practices act)

· (sidenote) Another example of Predatory pricing is our airline industry. One of the prime reasons why they’re making losses.

· Dumping means, suppose a ballpen is sold for Rs.10 in China but they intentionally export it to India at the price of Rs.5, in order to ruin the business
of local Indian pen-producers and to capture the Indian stationary market.

· China is notorious for this dumping tactic, earlier we had to impose Anti-dumping duty on their rubber products and tires.

· Some believe that entry of Foreign retailers will facilitate the Chinese scheme of dumping our market with their cheap products.

Arguments in favor of FDI in retail

Pro#1: No more wastage of agro-produce

· India is the second largest producer of fruits and vegetables,

· If we are the 2nd biggest producers of fruits and vegetables, why are we not a ‘big name / exporter’ in world market? And more
importantly, if we are second largest producer, then why is so much inflation in food items?

· Because Post-harvest more than Rs. 1 trillion worth farm produce, especially of fruits, vegetables and other perishables, is wasted due of lack of
storage and transport facilities.

· More than 50% of this can be saved, if we’ve proper cold-storage facilities.

· Government is not doing much about this (duh they are unable to save even the wheat in PDS, let alone cold-storage) and the private Indian players
donot have much money to invest in this cold-storage chain or those expensive big transport-trucks of America that we see in Discovery channel.

· So if FDI in retail is allowed, the MNCs would invest in cold-storage chains and those big transport trucks. Means lower wasted of produce. More
supply of fruits and vegetables. According to supply-demand rule the prices will go down.

· Right now, 100% FDI Is allowed in Cold-storage chain, but foreign players are not coming there because they’re not allowed to sell it in retail
malls. There is not much profit margin in operating a cold-storage alone. It’d take years to recover the investment. Only if MNCs are allowed to sell
the produce as well in their retail malls, they’ll feel interested in investing in this cold-storage game.

· Similarly FDI in Wholesale trading was allowed upto 100% since 1997.

Pro#2: Farmer gets more money for his produce

· Indian Farmer doesn’t have cold-storage or transport facility, if he grew 200 kilos of carrots, he has no option but to sell it as soon as possible
before it get spoiled. The middle agent buy this produce for as low as 2-4 rupees per kilo, but by the time it reaches market, the price jumps to 25-30
rupees per kilo. WHY?

· There is no organized truck- transport service, the truck operators are running in extremely competitive environment so they’ve to overload their
trucks. Once this overloaded truck goes through checkpoint, policeman will demand bribe for flouting the road permit provisions.

· Since the truck is overloaded, engine efficiency is reduced. He has to get his truck repaired frequently.

· The road quality and traffic Management is bad, more diesel is consumed.

· Trucker will add all these costs (bribe, repair, extra diesel) in his service charge.

· Truck reaches the city, your local vegetable-vendor pays to offload the carrots but he gotta maintain his own profit-margin as well, (+ the bribe he
has to pay to local policeman, municipality inspector etc) so the carrots that were lifted for 2 rupees, ultimately get sold for 25 rupees a kilo after
cutting everyone’s Commission.

When an organized MNC retailer gets in picture, he has his own extremely efficient and streamlined transport service. So there is no overloading of
trucks, there is very systematic packing of goods. His truck maintenance cost is thus very low and there is low wastage during transport.

Second, He doesn’t have to pay so many bribes at every level, because

1. There is no overloading of trucks, papers are in order. Less chances for policemen etc to blackmail him into paying bribe.

2. He got deep pockets, he gives big annual donations for ‘election funds’ to the ruling party and Diwali gifts to the concerned district officers.
That’s why small time petty officials such as police, municipality, food n sanitation inspector can’t dare to bother him every now and then, as they do
to small time retailers.

So MNC retailer’s cost price is quite low compared to small-time retailers. Hence he can afford to give attractive discounts to customers as well.

Same reason why many political parties dislike MNCs in Retail, you can extract more election-funds from 1000 small time players compared to from one
big player. Big player is less susceptible to arm-twisting compared to a small player.

· Right now Intermediaries [middle agents] dominate the value chain. They often their pricing lacks transparency. They often run secret cartels, so
even in open auctions, farmers don’t get good price for their produce.

· These elected cooperative marketing societies and Mandis are more or less same BJP vs Congress fight for domination in university elections, there is
hardly anything positive reform done for the students.

· According to some reports, Indian farmers realize only 1/3rd of the total price paid by the final consumer, as against 2/3rd by
farmers in nations with a higher share of organized retail.

· A study commissioned by the World Bank : Why India doesn’t earn much money from exporting its Fruits and vegetable (even though we’re second largest
producer) = Same reason, Non-competitiveness. Bad supply lines.

· A price that the farmer receives for a typical horticulture product is only 12–15 per cent of the price the consumer pays at a retail outlet.

· Example small time cushions, toys, shoes, plastic wares maker. They don’t see much business because they don’t have the avenues to sell their
products. Big mall with big floor space, provides them opportunity to market their products and get customer’s attention.

· More than 40% of the medicines sold in rural and semi-urban areas of India are of fake brands.

· For an MNC retailer you can atleast feel confident that it won’t be the case.

· Remember once upon a time, Mobile calls used to cost 7 Rupees per minute and “incoming” wasn’t free. Why? Because there was low level of competition.
Barely 2-3 players in the market. FDI can be a powerful catalyst to spur competition.

· To open a big mall, walmart has to purchase land and construct a big building= lot of laborers, masons, plumbers, electricians employed.

· Same way farmers are getting more money so all these people have more money in their hands and they use it to purchase bikes, mobiles etc. so more
demand and more employment.

· This is trickle down theory. Marxist and Vinod Dua (NDTV) disputes this theory.

· Fears of large adverse effects on existing retailers are grossly exaggerated especially since modern domestic retailing has begun in any case via
desi retailers such as Big Bazzar and Reliance. (10th plan document)

1. Entry of foreign players must be gradual with social safeguards so that the effects of labour dislocation can be analysed and policy fine tuned.

2. Foreign players should initially be allowed only in metros cities only.

3. Gradual opening of the retail sector over a period of 3-5 years to give domestic industry enough time to adjust to the changes.

5. Regular monitoring of mall-inventories to see that India is not used as dumping ground for Chinese products.

Some reports for mythbusting

ICRIER STUDIES ON: (i) FOREIGN DIRECT INVESTMENT IN RETAIL SECTOR-INDIA (2005) and (ii) ‘IMPACT OF ORGANIZED RETAILING ON THE UNORGANIZED SECTOR’-2008

Based on their study

2. The adverse impact on sales and profit, however, weakens over time. There was no evidence of a decline in overall employment in the unorganized
sector as a result of the entry of organized retailers.

4. There was competitive response from traditional retailers through improved business practices and technology upgradation.

There was no evidence of an adverse impact by organized retail on intermediaries. There is, however, some adverse impact on turnover and profit of
intermediaries dealing in products such as, fruit, vegetables, and apparel. Over two-thirds of the intermediaries planned to expand their businesses,
in response to increased business opportunities opened by the expansion of retail.

Farmers were found to benefit significantly from the option of direct sales to organized retailers. The average price realization for cauliflower
farmers selling directly to organized retail was about 25 per cent higher than their proceeds from sale to regulated government mandis. The
profit realization for farmers selling directly to organized retailers was about 60 per cent higher than that received from selling in the mandis. The difference was even larger when the amount charged by the commission agent (usually 10 per cent of sale price) in the mandi
is taken into account.

Scenario in other third world countries

· FDI is permitted in the retail sector in Brazil, Argentina, Singapore, Indonesia, China and Thailand without limits on equity participation (that is
100% FDI allowed)