[Economy] What If Greece Exits from Eurozone? Implications on Indian and World Economy

How does a Government finance its operations?

What is Sovereign Debt?

Then what is Sovereign Debt Crisis?

What is a government bond?

What is a bond market?

In either case, you want to “Exit” from game before its too late. You want to sell the bond to another person and recover whatever money possible and reinvest that money in something even safer and more profitable, for example starting your own Saas-bahu serial. It doesn’t require lot of brain or money (*if you ask the actresses to bring their own makeup, expensive sarees and jewellary), and still you get to earn plenty of ad-revenue from anti-aging and skin whitening creams.
So, you come to sell this bond to me. But I also read the newspapers (except The Hindu), so I know things are not good with Indian Government or economy, so I won’t pay you Rs.100 but only Rs.90 for your bond. You’re not in a position to negotiate, you’re panicked, you just want to exit from this game and you fear that if you continue to hold this bond, 15 days from now, people won’t even pay you Rs.50 for it.
Thus I buy the Bond worth Oringally “MRP” of Rs.100, for Rs.90 from you.
Question: why would I do that? Why would I buy a “not so good-looking” bond from you?
Ans.

Why do bond markets matter?

Governments can just go on print “Bonds” on their HP printers and sell it to junta, because money doesn’t fall from sky. Someone someday will have to pay for it. If they don’t, then the Bond Yield will increase and a point will come when you (Government) have to offer 36% interest rate on fresh bonds to seduce new investors. Therefore, Governments, put limit on their own borrowing. In India we’ve a thing called FRBM (Fiscal responsibility and budget Management).
For Europen Union, back in 1997 when they were forming the gang, they had decided that each gang-member (country) will not borrow beyond 3% of its GDP per year.
But Government of Greece manipulated** its account-books to appear as if they were staying within the 3% limit, but actually they had been borrowing much above their “Aukaat” – almost 13% of their GDP.
**(might have taken coaching from Ramalinga Raju!)

Why is Greece such a messed up Economy?

–end of copy paste–
In short, Greece is not a country but Air India running MNREGA. And adding insult to the injury, due to the recession in USA, the tourism and export industry of Greece had took a huge setback.

A.Raja could give the loans to save these countries but stupid Indian media gets him arrested, while Mohan continues to loop his repeated tape on every 15th August speech that Naxalites are the biggest thread to India, while Pranab continues to loop his tape that everything bad with Indian economy is because of “Global Situation”.Anyways Fast forward to
February 2012: The Austerity Bill
EU To Greece: Ok we’ll give you the money to pay off your debts, and we call this money “Bailout money” but you’ll have to shut down your Air Indias and MNREGAs and we call it “Austerity Measures”.
PM of Greece: “Whaat an idea sir-ji.”
Greece Government introduces the austerity bill in parliament which included following measures

Junta of Greece: “Not a good idea sir-ji”
and they start rioting on the street. But since Government kept the promise of introducing reforms, EU gives them billions of Euro as loan.
May 2012: Elections in Greece

There are two major parties in Greece.

See this same like Paki PM comes to India and speaks in one tone but when he’s back in an election rally in Lahore he’d be speaking an a totally different tone about Kashmir. And there he’ll say India is not cooperating with us and India is the bad guy.

Experts feared that public of Greece will elect anti-bailout parties that reject the spending cuts (austerity measures) suggested by EU and IMF. So this newly elected party will try to renegotiate the bailout terms with EU / IMF to such a ridiculous level, that negotiations will break off and then Greece will exit from EU.

Thankfully for the time being, crisis has been averted as the right wing pro-EU / bailout party has gained the majority. 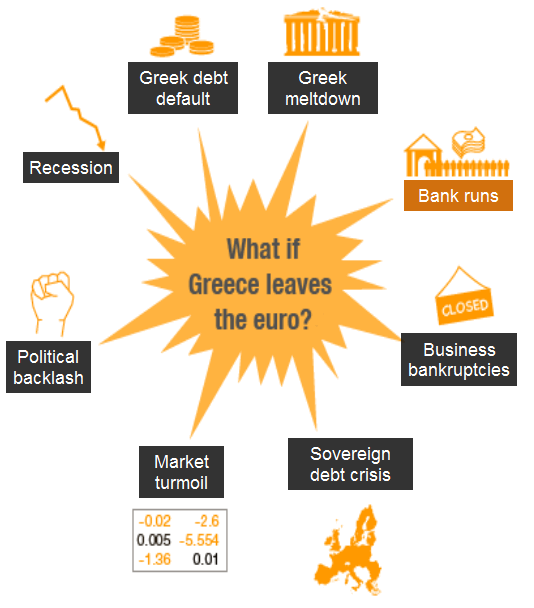 Lines at the Banks

Good for US and Japan

Why Greece Exit =Trouble for India?

Who do you think is right? Greece or the EU?