Prime Minister Manmohan Singh is busy uploading (un)funny photos in his facebook album and tagging random friends in them to get more “likes”. Vijay Kelkar makes an entry in his office.

Parts of Budget: Revenue and Expenditure

Kelkar: In every budget, there is incoming money (Revenue) and out going money (Expenditure).

Kelkar: We can further refine this classification into Revenue/capital receipts and Expenditure.

But let us not complicate the matter for the time being.

Mohan: Now What is this incoming money from tax and non tax sources?

Kelkar: see the table yourself for the examples.

Mohan: and what is this outgoing money? Plan and non-plan?

Non-plan Expenditure, obviously means spending money on activities that are not related with national five year plan. Check the table for examples.

Mohan: ok so now what?

Kelkar: Now we classify the budget according to the balance between incoming and outgoing money.

In reality, Government always has deficit budget. Because

as long as there is Pakistan and China in the neighborhood, we’ll have to maintain a huge army, keep buying new tanks and missiles.

As long as there are poor people, we’ll have to keep running various Government schemes.

Mohan: come to the point.

Kelkar: The point is,

When Government spends beyond its aukaat, it creates a big pothole in the highway.

This pothole can be called a Revenue deficit, budget deficit, fiscal deficit or primary deficit – according to the formula you use to measure the depth of this pothole. 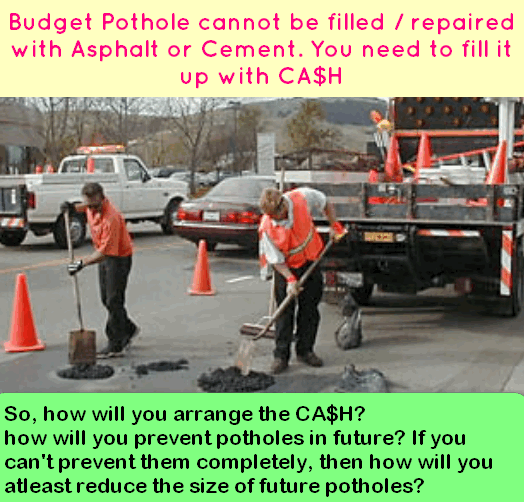 In the 1980s, Sukhmoy Chrokroborthy Committee came up with the fiscal deficit formula

Mohan: but why should we calculate this fiscal deficit?

Kelkar: This fiscal deficit number tells you the depth of the hole and gives you the idea how much money do you need to borrow from the sources

within India (internal borrowing – from RBI, Other banks etc)

Bigger the pothole, more cash you need to fill it up.
Here is some food for thought. Incoming Outgoing Breakup for USA budget 2011. 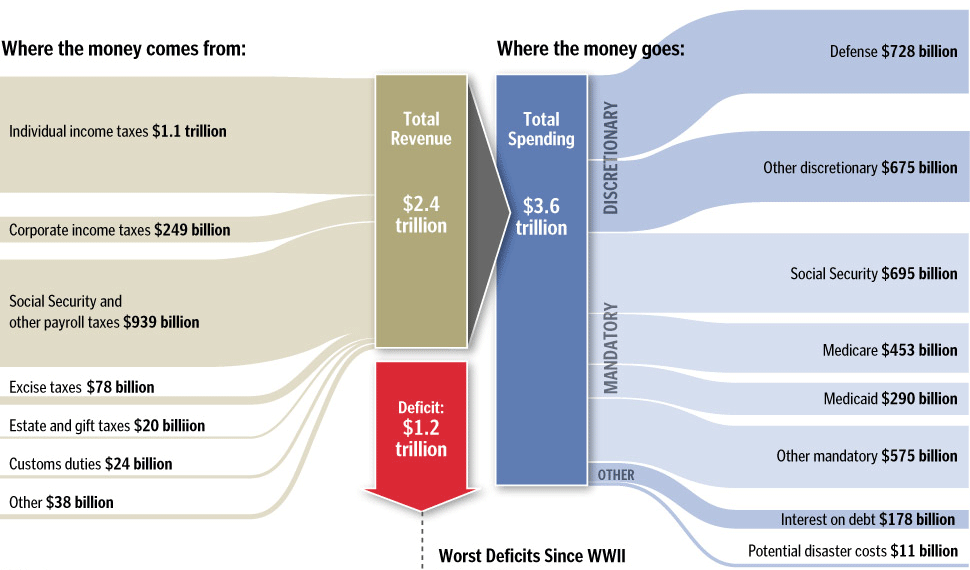 Suppose, Government orders RBI to print lots of cash to solve poverty.
Then Government launches “Rajiv Gandhi Suitcase yojana (RGSY)” under which every BPL family is given a suitcase containing Rs.10 lakh.
What will happen then?
They’ll all go and buy lots of onion,milk,mobile, cars, houses everything.
=Demand of product will increase, but the supply will remain almost the same as earlier.
So, there will be one customer offering Rs.400 per kilo of onion, then another guy would offer Rs.500 per kilo of onion=inflation =not good.

On the other hand, Suppose your boss pays you 10 lakh per year, but that means he definitely extracts work worth more than 10 lakhs from you and sells some goods/services to a third client. That’s why giving you 10 lakhs doesn’t increase inflation. (because some other client is buying the services you had produced).
but giving 10 lakh to a poor without making him economically productive = increases inflation.

Kelkar: not always bad. It depends on the situation.

When fiscal deficit = NOT BAD?

Thus, fiscal deficit is not necessarily a bad thing, always.

When and why is fiscal deficit= BAD?

Bond Yield increased
From Eurozone Greece Exit article, You already know what is bond yield. If not click me

When Government keeps borrowing and borrowing to fill up the fiscal deficit pothole, then bond yield will increase = not good because more and more of taxpayers’ money (i.e. Government ‘s incoming money) will go in repaying that bond interest rate rather than going into education or healthcare.
Crowding out investment
We already saw that, Fiscal deficit pothole can only be filled with cash. This cash has to be borrowed from RBI, other banks, FII etc. who buy the Government bonds.

So, that much money (Credit/loan) is not available for other needy businessman.

thus fiscal deficit “Crowds out”investment from private sector. Now that needy businessman will have to borrow money at higher interest from another party (this is how fiscal deficit increases ‘interest rates’)= input cost of product increased = he will increase the MRP of his product or service to maintain the same profit margin = inflation. (cost-push type) 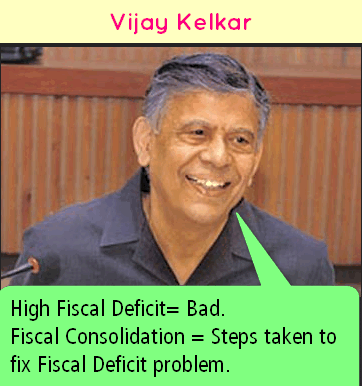 In this financial year alone (2012-13), the government will pay more than 4 lakh crore just as interest payment on debt taken earlier! = more imbalance between incoming and outgoing money.

Now in the opening lines, Kelkar said Fiscal deficit would be around 6%. What does that mean?

There are two ways to express Fiscal Deficit.

In newspapers and economic discussions, the Fiscal is usually expressed in second form (percentage).

Then Vijay Kelkar set out for a journey to prepare a ‘roadmap’ for fiscal consolidation.

In September 2012, He submitted his report to the Government.

We’ll see the recommendations of Kelkar Committee in future article. (To Be continued.)

All of my articles on Economy are Archived on this link: mrunal.org/economy
Ref: