What was Subprime crisis?

Thus, it’s a win-win situation for you whether I pay back the loan or not, you’re going to make good profit.

Now, Back to the topic

^This is just a crude explanation of what happened in sub-prime crisis. Otherwise the actual crisis was result of many layers of refined and sophisticated loan and investment products interlinked with each other.

But why is it called “Sub-prime crisis”?

^President Obama took these steps to increase money in the hands of American people, so they can go out for shopping = demand of more products and services= more employment could be created.

But of course, money doesn’t fall from sky.

You already know when outgoing money is higher than incoming money, it leads to fiscal deficit.

Fiscal deficit is a big pothole in the road to country’s prosperity. This pothole can be filled with cash only. If this pothole keeps increasing in size then it’ll lead to very bad effects on economy.

So, President Obama had planned some things in advance to increase incoming money and decrease outgoing money for the Government. These plans are:

If things go in ^this way, US Government will earn 4 trillion dollars in next 10 years. That’ll cover up most of its huge fiscal deficits and past mistakes. (i.e. buying toxic assets, money wasted on Iraq-Afghanistan and most importantly Pakistan).
Ok sounds well and good, but

What is fiscal Cliff? 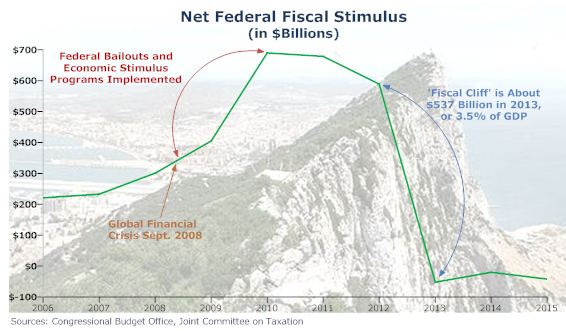 What is Fiscal Deficit?

Why is Fiscal cliff bad for US Economy?

If President Obama’s plan is carried out, then

^These numbers vary from site to site, if it’s a pro-Republican party newspaper or expert- they’d say 20 lakh American will become jobless, but some other Pro-democratic party newspaper or analyst would say only 7 lakh will be jobless. 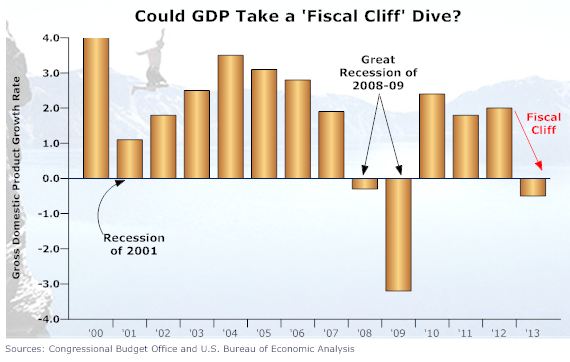 Effect of Fiscal Cliff on India?