Almost all of these questions can be solved by reading following:

Within Economy topic, the internal breakup looks like this: 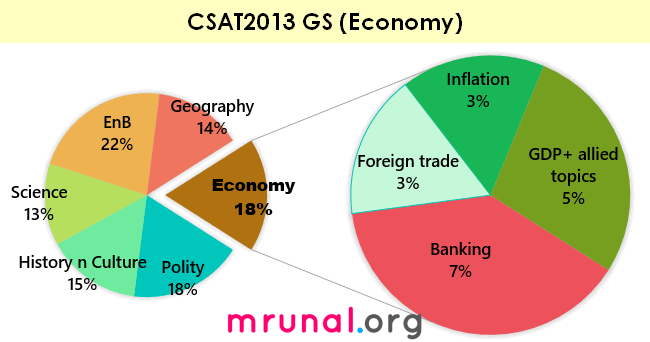 1. An increase in the Bank Rate generally indicates that the

2. The Reserve Bank of India regulates the commercial banks in matters of

RBI regulates Liquidity of Assets via SLR hence B is false, because it doesn’t have (1)

If existing bank requires RBI permission. Hence (A) is false because it doesn’t have (2).

3. Which of the following grants/ grant direct credit assistance to rural households?

NABARD doesn’t give “direct” credit assistance. It provides credit via intermediaries such as Microfinance companies, cooperative society, RRB. Therefore, 2 is false. Any answer choice that contains 2 is false. And thus we’re left with C only 1 and 3.

The correct sequence of these decreasing order of Liquidity is

Open market operation= when RBI buys/sells securities in open market…. in case of OMO, first party permanently sells the Government security to second party. Second party is free to do whatever it wants with that security.

6. Priority Sector Lending by banks in India constitutes the lending to

Answer is (D) all of above. For more, refer

7. Supply of money remaining the same when there is an increase in demand for money, there will be

If supply of onion is same, but junta demands more onion, what will vegetable-seller do? Increase price to get more profit. When same thing happens with money, the banks/lenders will do the same by increasing interest rates.

1. The balance of payments of a country is a systematic record of 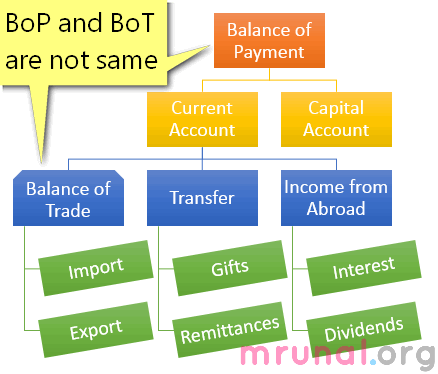 Recall article on 6th Chapter of Economic Survey Click me

or just observe the chart given under previous question.

Remittances (item#3) fall under Current Account. Therefore any answer choice that includes #3, is wrong. Eliminate them.

Thus we’re left with answer (B)

3. Which one of the following groups of items is included in India’s foreign-exchange reserves?

India’s foreign exchange reserves is made up of

Hence the closest answer choice is (B): Foreign-currency assets, gold holdings of the RBI and SDRs

Other answer choices talk about loans from foreign countries/World bank: while those have some relevance in current/capital account classification type MCQs, but in case of forex reserve they’re irrelevant.

Refer page 7.8 in Indian Economy by Ramesh Singh, topic title “Effects of Inflation”–> I. On Creditors and Debtors.

by the way, they haven’t specifically used the word “inflation indexed bonds”, hence we cannot say Inflation benefits the bond-holders.

2. A rise in general level of prices may be caused by

3. Which one of the following is likely to be the most inflationary in its effect?

Printing/creating new money to finance a budget deficit will be the most inflationary effect. Because it increases money supply without any increase in production of goods and services. Recall the Israel Palestine article (click me): How Germany suffered Hyperinflation when government started printing money just to pay war reparation costs under Treaty of Versailles. Check this photo: A German woman burns currency, because its paper was cheaper fuel than coal! 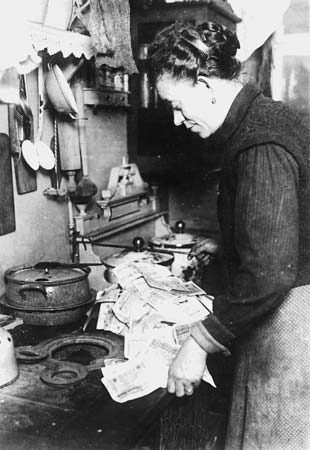 and @Public Administration players, recall the great Laxmikanth and his chapter on Financial administration:

Currency expansion: Under this method, government prints more currency to repay debts. This results in inflation and destroys the fixed value of money claims. This method was used by Germany after First World War.

1. The national income of a country for a given period is equal to the

Observe the glossary given on page 100 and 101 in NCERT Macroeconomics class 12.
National income= NNP @Market price MINUS indirect tax PLUS subsidies.
then what is NNP @Market price? (NNP_MP)

then what is GNP?

GNP=GDP + Net factor income from abroad. In other words, GNP includes the aggregate income made by all citizens of the country, whereas GDP includes incomes by foreigners within the domestic economy and excludes the incomes earned by the citizens in foreign economy.

National income of a country is defined as the sum of total factor incomes accruing to the residents of that country from the production activity performed by them both within and outside the economic territory in a year.

Hence the closest answer among the given = (A).
Update Jun-26-2014: UPSC uploaded official answerkey. Correct answer is: D. money value of final goods and services produced.

3. Economic growth in country X will necessarily have to occur if

Internally capital formation takes place when a country does not spend all its current income and consumption, but saves a part of it and uses it for investment for increasing further production. This act of saving and investment is described as capital accumulation or capital formation.
Therefore, answer is (C)

B is wrong because
NIOS Economy, Ch 38 population and economic development,

A and D are wrong because
The positive developments happening in World economy (choice A and D) won’t help economic growth in the given country, if it is a closed economy.
Final answer (C)

4. In India, deficit financing is used for raising resources for

as per page 273, Development and Environmental Economics by Ne Thi Somashekar

Deficit financing is a pragmatic tool of economic development and has been used by Indian government to obtain necessary resources to finance the five year plans.

5. To obtain full benefits of demographic dividend, what should India do?

To rip maximum demographic dividend, India has to promote skill development. This is what Economic Survey and 12th FYP have been advocating. Ans (A)