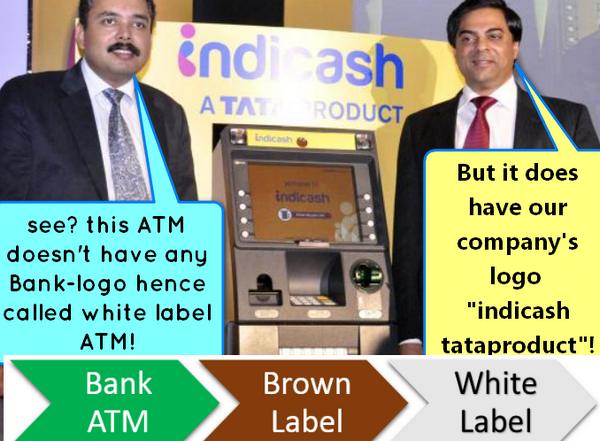 Initially, RBI did not permit White label ATMs, and Banks wanted to reduce the operational cost, so they came up Brown Label ATM (outsourcing) system.

Why do we need White Label ATM?

Most of the ATMs concentrated in urban areas- that too only at prime locations e.g. near shopping malls and airports= financial inclusion not achieved.

How does White Label ATM help in financial inclusion?

RBI requires White label-ATM companies to install machines in the ratio of
Two ATMs in (tier 3 to 6 place) : One ATM in (tier 1-2 place).

Where does the Commission come?

White ATM Company doesn’t run for charity or goodwill. Company has to make profit. So where does the asli–maal/commission come?

Result: Fed.Bank account holders panic and line up at other ATMs (sponsored or owned by other banks) to pull out their money = these type of “runs” destabilize the banking system. Extreme cases lead to situation like Cyprus-Banking crisis.

Visit Mrunal.org/Economy For more on Economy.