important: SSC has uploaded halltickets for reexamintion of CGL-2013 to be held on 27th April. Respective players check your regional SSC sites accordingly. now coming to the subject…

Bandhan and IDFC got new licences, you already know that. it’s just two line current affairs. but for SBI /UPSC interviews, we need to some background information for questions like:

To answer such “Devil’s advocate” type interview questions, we need to go back in history:

There were two types of banks

Overall, neither British Banks nor Swadeshi banks helped in the financial inclusion of poor people, they still had to rely on local money lenders and Zamindars. 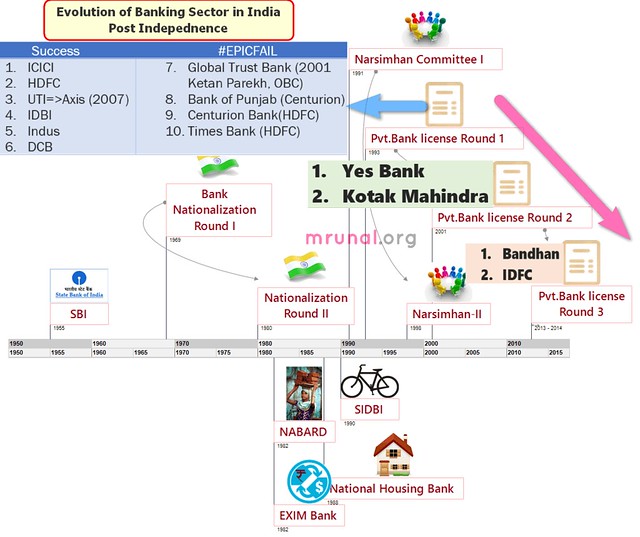 moral of the story = nationalization is not a solution – even if Sahara, NSEL, Ramalinga Raju, Ketan Parekh, Harshad Mehta or Mr.XYZ is doing scam- that doesn’t mean you should nationalize everything.

By government of India in 1991. It recommended following:

All of above running successfully, so that gives us “positive arguments”- that not all private entities are seamstress. in fact, ICICI, HDFC, Axis = top banks of India, even have presences abroad, employ lakhs of people. Hence no harm in giving bank licences to private players.

These four #EPICFAIL banks give us the “negative arguments” that private companies must not be given bank licences. Because they can also close down like ^these, creating panic among the clients, blood pressure, heart attacks and suicides.

From the earlier #EPICFAIL of those four banks, RBI also learned lesson.

Anyways moving on to the rules

Many other technical rules but for descriptive/interview answer- above 9-points sufficient.

Important: Bharatiya Mahila Bank also launched in Sep’13 (but its public sector bank, has nothing to do with this “third” round of Bank licences or Bimal Jalan Committee)

These two are given only “in-principle” approval. Meaning

RBI has also prohibited the promoters (Ghosh and Lall) to hold CEO position in their respective banks. This is meant to prevent conflict of interest. Because in past, Global Trust bank’s CEO Ramesh Gelli was accused of involved in Ketan Parekh scam.

Curiously though Yes Bank’s promoter Rana Kapoor enjoys both MD and CEO position in his bank!

What is Differential licences?

More pro-con arguments can be added, post them in comments below!

This has nothing to do with Bimal Jalan Committee or third round of private bank licences. But to confuse you in MCQs, the examiner will deliberately include some facts related to Mahila bank. Therefore, you must know the basics:

How is it a Mahila Bank?

(^ya this type of GK essential for IT-graduates for the bank interview stage.)

(Interview Q.) Bharatiya Mahila Bank is a mere symbolic exercise for feel good publicity. Do you agree? Yes/No and Why?

But in Group discussion/ interview, you need to be aware of the negative points as well, in case the other party decides to play “Devil’s advocate”.

Mahila Bank is mere tokenism, without substance because: