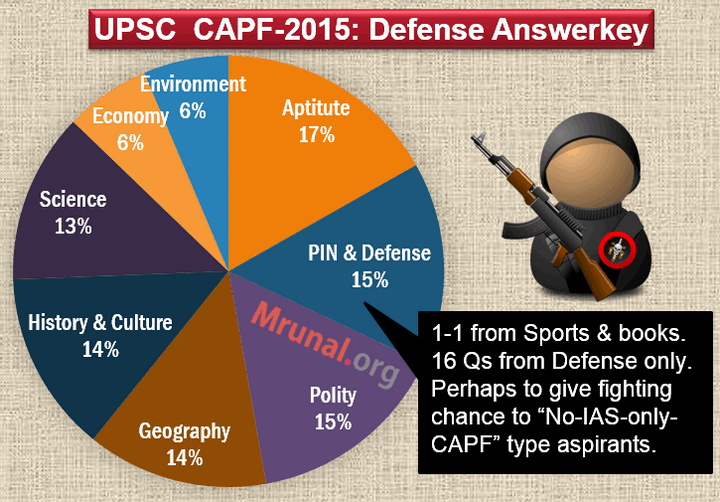 7. Which one of the following Grand Slam Tennis Tournaments had the higher total prize money (in terms of US Dollars) in the year 2014?

AS per Reuters news agency, the answer is “C”

65. Who among the following has authored the book ‘The Idea of India’ ?

2009’s Hindu article says, it was written by Sunil. 2015, May: Sunil in news for inaugurating some BBC radioshow. But who has time to prepare this deep!

45. Match List-I with List-II and select the correct answer using the code given below the Lists :

It’s a supersonic cruise missle, as per my defense compilation, so answer is “A”.

55. Who functions as chairman, Chiefs of Staff Committee ?

Option B is correct as per Reference- Page 596 of Lucent GK. 5th paragraph last line.

58. All proposals for acquisition of weapon systems involving capital expenditure of more than Rs 1,000 crore require the approval of the :

From PIB press release in 2012, the answer is “D” cabinet Committee in security.

59. Which one of the following statements is correct ?

As per India today article in March 2015, option A is right. although if we consult multiple news sites then it becomes debatable question.

62. GRSE, BDL and MIDHANI are acronyms of:

According to IBN report in 2013, they’re recruited by Indian Army and placed under President’s Secretariat. So answer will be “D” none of above. (Because Indian army is not paramilitary)

66. Who is the Supreme Commander of the Indian Armed Forces?

Option A is correct. Reference – Page 596 of Lucent GK.(second paragraph )

Cheetahs and the Chetaks are sub-three-tonne, single-engine unarmed utility helicopters, as per The Hindu March 2015, so option “B”

102. Which one of the following is NOT a Central Paramilitary Force under the Ministry of Home Affairs ?

Option C is correct, as per Page 597 of Lucent GK.

105. Which one of the following is under the control of the Ministry of Defence ?

Reference- http://mha.nic.in/armedforces. So a,c and d can be eliminated and Correct answer is B.

108. Jammu and Kashmir Light Infantry is :

Option C is correct a per Indian Army website

Hindu February 2014 report: India’s navy chief, Admiral D.K. Joshi resigned as chief of the Indian navy, owning “moral responsibility for the accidents and incidents during the past few months”. So, Option B is correct.

114. Who heads the Defence Acquisition Council ?

Defense Acquisition Council is chaired by Defence Minister says Hindu May 2015 so, Option A is correct.

117. The equivalent rank of Commodore of Indian Navy in the Indian Army is :

As per Mrunal defense compilation, answer is “A”.

123. Which one of the following best describes the Andaman & Nicobar Island Command ?

In the aftermath of the Kargil operations, the importance of unified operations under a central command was felt necessary to handle present day conflicts, more so in the A&N region. As a result of the Kargil Review Committee and on recommendations of Group of Ministers, the Andaman & Nicobar Command (ANC) was commissioned on 08 Oct 2001 as the first unified Command, comprising the Army, Navy, Air Force and Coast Guard.

So the correct option is B