Here is the question paper of the compulsory English language in UPSC civil services mains examination conducted on 18th December 2015. 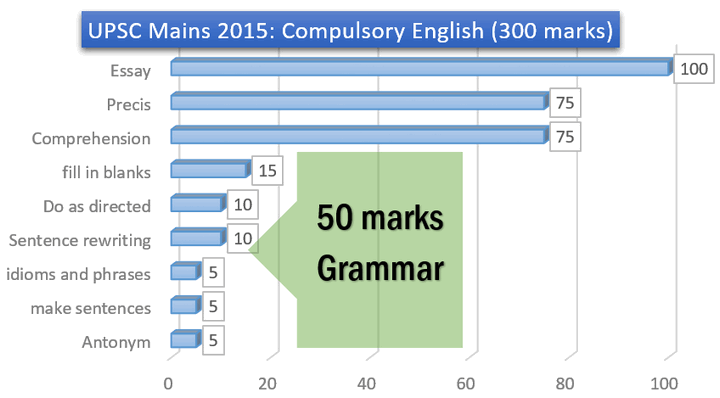 Q1. Write an essay in about 600 words on anyone topic

Q2. Read carefully the passage given below and write your answers to the questions that follow in clear, correct and concise language – 15×5=75 marks

A desert is a barren area of land where little precipitation occurs and living conditions are threatening for plant and animal life. The lack of vegetation exposes the vulnerable surface of the ground to the processes of denudation. About one-third of the land surface of the world is arid or semi-arid Deserts are usually hot and barren places; yet they are also beautiful. A few plants, rocks and dusty red-brown soil make up the ingredients of most North American deserts where there is sufficient food and water for certain animals to survive. Deserts cover more than one-fifth of the Earth’s land and they are found on every continent. A place that receives less than 10 inches of rain per year is normally considered a desert. They are part of a wider classification of regions called “dry land”. These areas exist under a moisture deficit, which means they repeatedly lose more moisture through evaporation than they receive from annual precipitation.

Despite the common notion of deserts as dry and hot, there are cold deserts as well. One famous dry and hot place in the world with no visible rock or plant and barely any water is the Sahara desert. It is the largest hot desert in the world that reaches temperatures of up to 122 degrees Fahrenheit during the day. Some deserts are very cold, like the Gobi desert in Asia and the desert on the continent of Antarctica. Only about 10 percent of deserts are covered by sand dunes. The driest deserts get less than half an inch of precipitation each year and that is from condensed fog

Desert animals have adapted ways to help them keep cool and The Animal when the going gets tough. Camels also have thick hair in their ears for keeping out sand; they also sport closable nostrils, an eye membrane, and wide feet that act like snow-shoes in the land. Desert plants may have to go without fresh water for years at a time. Some plants have adapted to the arid climate by growing long roots that tap water from deep underground. Other plants, such as cacti, have special means conserving years old.
Some of the world’s semi-arid regions are turning into deserts at an alarming rate. This process, known as desertification., is not caused by drought, but usually arises from the demands of human population that settles The soil by the hooves of livestock may degrade the soil and encourage (erosion warming deserts. Higher temperature may produce an increasing number of wildfires eliminating slow -growing trees and shrubs and replacing them with fast-growing grasses

Q3. Make a precis of the following passage in about one-third of its length. Do not give a title to it. The precis should be written in your own language

The means may be equated to a seed, the end to a tree; and there is just the same inviolable connection between the means and the end as there is between the seed and the tree. I am not likely to obtain the result flowing from the worship of God by laying myself prostrate before Satan. If, therefore, anyone were to say; ‘I want to worship God; it doesnot matter that I do so by means Satan’ , it would be set down as ignorant folly. We reap exactly as we sow.
If I want to deprive you of your watch, I shall certainly have to fight for it; if I want to buy your watch, I shall have to pay you for it; and if I want it as a gift, I shall have to plead for it; and according to the means I employ, the watch is a stolen property, different results from three different means. Will you still say that means do not matter ?

Let us proceed a little further. A well-armed anger argue that you want to punish that rogue the good of your neighbours; you have collected a number of armed men, you want to take his house by assault; he is duly informed of it, he runs away; he, too is increased. He collects his brother-robbers, and sends you a defiant message that he will commit robbery in broad daylight. You are strong, you donot fear him. You’re prepared to receive him. Meanwhile, the robber pesters complain before you. You reply that you are doing all their sake, you donot mind that your own goods have been stolen. Your neighbours reply that robber never pestered them before, and that he commenced his depredations only after you declared hostilities against hi. You’re between Scylla and Charybdis. You’re full of pity for the poor men. What they say is true. What are you to do? You’ll be disgraced if you now leave the robber alone. You, therefore, tell the poor men: ‘Never mind. Come, my wealth is yours. I will give you arms. I will train you how to use them; you should belabour the rogue; don’t you leave him alone.’ And so the battle grows. The robbers increase in numbers; your neighbours have deliberately put themselves to inconvenience. Thus the result of wanting to take revenge upon the robber is that you have disturbed your own peace; you are in perpetual fear of being robbed and assaulted; your courage has given place to cowardice. If you patiently examine the argument, you will see that I have not overdrawn the picture. This is one of the means.

Now let us examine the other. You set this armed robber down as an ignorant brother, you intend to reason with him at a suitable opportunity; you argue that he is? after all, a fellow man; you do not know what prompted him to steal. You, therefore, decide that when you can, you will destroy the mans motive for stealing. Whilst you are thus reasoning with yourself, the man comes again to steal. Instead of being angry with him, you take pity on him. Henceforth, you keep your doors and windows open, you change your sleeping place, and you keep your things in a manner most accessible to him. The robber comes again and is confused as ail this is new to him; nevertheless, he takes away your things. But his mind is agitated. He enquires about you in the village, he comes to learn about your broad and loving heart; he repents, he begs your pardon, returns you your things, and leaves off the stealing habit. He becomes your servant, and you find tor him honourable employment. This is the second method.
Thus, you see, different means have brought about totally different results. I do not wish to deduce from this that robbers will act in the above manner or that all will have the same pity and love like you. I only wish to show that fair means alone can produce fair results, and that, at least in the majority of cases, if not indeed in all, the force of love and pity is infinitely greater than the force of arms. There Is harm jn the exercise of force, never in that of pity.

Q5(a) Rewrite each of the following sentences as directed without changing the meaning :1×10 =10 marks

Q5(b) Use the following words to make sentences that bring out their meaning clearly. Do not change the form of the words. (No marks will be given for vague and ambiguous sentences.)

Q5(d) Use these idioms/phrases their meaning clearly. Do not change the form of the words: 1×5=5