Pattern: History and Culture: 2016’s Prelim vs. the Past

If I spend more time observing the papers, I could come up with more similarities and continuities. But let’s not waste the remainder of our jawaani on this single matter…The conclusion is- 2016’s History-Culture is more akin to 2014’s prelims rather than 2015. 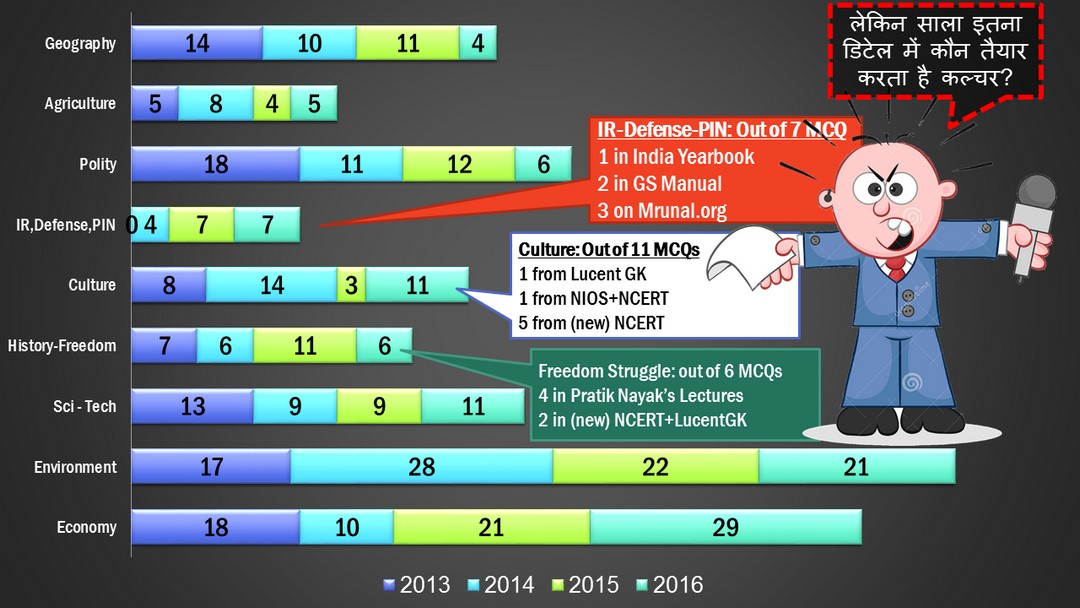 Road ahead for History-Culture

24. The `Swadeshi’ and ‘Boycott’ were adopted as methods of struggle for the first time during the
(a) agitation against the Partition of Bengal
(b) Home Rule Movement
(c) Non-Cooperation Movement
(d) visit of the Simon Commission to India Pratik Nayak’s Lecture HFS7/P7: Swadeshi and Boycott started against Partition of Bengal in 1905. Let’s crosscheck other options as well:
(b) Home Rule Movement: 1916 it started, the demand was of ‘home rule’
(c) Non-Cooperation Movement: 1919, after Gandhi arrived, against removal of khalifa, Punjab wrongs and swaraj
(d) visit of the Simon Commission to India: 1928

33. Satya Shodhak Samaj organized
(a) a movement for upliftment of tribals in Bihar
(b) a temple-entry movement in Gujarat
(c) an anti-caste movement in Maharashtra
(d) a peasant movement in Punjab

39. The Montague-Chelmsford Proposals were related to
(a) social reforms
(b) educational reforms
(c) reforms in police administration
(d) constitutional reforms 67. What was the main reason for the split in the Indian National Congress at Surat in 1907?
(a) Introduction of communalism into Indian politics by Lord Minto
(b) Extremists’ lack of faith in the capacity of the moderates to negotiate with the British Government
(c) Foundation of Muslim League
(d) Aurobindo Ghosh’s inability to be elected as the President of the Indian National Congress Pratik Nayak’s lecture HFS7/P8: can be answered directly that “B” is the correct choice. Let’s check other options as well: 13. Banjaras during the medieval period of Indian history were generally
(a) agriculturists
(b) warriors
(c) weavers
(d) traders

(New) NCERT Class 7 Ch 7: Tribes, Nomads and Settled communities, Page 94-95:
The Banjaras were the most important trader- nomads. Their caravan was called tanda. Sultan Alauddin Khalji used the Banjaras to transport grain to the city markets. Emperor Jahangir wrote in his memoirs that the Banjaras carried grain on their bullocks from different areas and sold it in towns. They transported food grain for the Mughal army during military campaigns. With a large army there could be 100,000 bullocks carrying grain.

14. Who of the following had first deciphered the edicts of Emperor Ashoka?
(a) Georg Bilhler
(b) James Prinsep
(c) Max Muller
(d) William Jones

(New) NCERT Std 12th Themes in India History, Part-I, Page 28-29
It was only after decades of painstaking investigations by several epigraphists that James Prinsep was able to decipher Asokan Brahmi in 1838. He found that most of these mentioned a king referred to as Piyadassi – meaning “pleasant to behold”; there were a few inscriptions which also
referred to the king as Asoka, one of the most famous rulers known from Buddhist texts.

25. With reference to the religious history of India, consider the following statements :
1. The concept of Bodhisattva is central to Hinayana sect of Buddhism.
2. Bodhisattva is a compassionate one on his way to enlightenment.
3. Bodhisattva delays achieving his own salvation to help all sentient beings on their path to it.
Which of the statements given above is/are correct?
(a) 1 only
(b) 2 and 3 only
(c) 2 only
(d) 1, 2 and 3

(New) NCERT Std 12th, Themes in India History, Part-I, Page 103
Page 103: under the sub-heading Mahayan Buddism, they’ve written : “The concept of the Bodhisatta also developed. Bodhisattas were perceived as deeply compassionate beings who accumulated merit through their efforts but used this not to attain nibbana and thereby abandon the world, but to help others. The worship of images of the Buddha and Bodhisattas became an important part of this tradition. This new way of thinking was called Mahayana – literally, the “great vehicle”.

Hence first statement is wrong. This eliminates A and D; while 2nd and 3rd statements are correct and by elimination of #1, there is only one such option left ie. B) 2 and 3 only.

40. What is/are common to the two historical places known as Ajanta and Mahabalipuram?
1. Both were built in the same period.
2. Both belong to the same religious denomination.
3. Both have rock-cut monuments.
Select the correct answer using the code given below.

(d) None of the statements given above is correct

Hence by elimination, only 3rd statement is right, hence option B)

63. With reference to the economic history of medieval India, the term Araghatta’ refers to
(a) bonded labour
(b) land grants made to military officers
(c) waterwheel used in the irrigation of land
(d) wastel and converted to cultivated land

Can be answered if you’ve read NCERTs with a Persian Dictionary (!) Now, UPSC trolling people through NCERTS. (New) NCERT Class 7 Page 6 and 7 discusses invention of Persian wheel in irrigation. Upon searching google book– we find this device was known as “Araghatta”. साला इतना डिटेल में कोन तेयार करता है?
64. With reference to the cultural history of India, the memorizing of chronicles, dynastic histories and Epictales was the profession of who of the following?
(a) Shramana
(b) Parivraaj
(c) Agrahaarika
(d) Maagadha

Through google books and net searching, we find

Hence D is the right choice.

92. With reference to the cultural history of medieval India, consider the following statements :
1. Siddhas (Sittars) of Tamil region were monotheistic and condemned idolatry.
2. Lingayats of Kannada region questioned the theory of rebirth and rejected the caste hierarchy.
Which of the statements given above is/are correct?
(a) 1 only
(b) 2 only
(c) Both 1 and 2
(d) Neither 1 nor 2

84. Regarding the taxation system of Krishna Deva, the ruler of Vijayanagar, consider the following statements :
1. The tax rate on land was fixed depending on the quality of the land.
2. Private owners of workshops paid an industries tax.
Which of the statements given above is/are correct?
(a) 1 only
(b) 2 only
(c) Both 1 and 2
(d) Neither 1 nor 2

Difficult to find source material that specifically pinpoints Krishna Deva’s Fiscal policy. But from Indian History by Krishna Reddy, we find that in Vijaya Nagar empire:

Another source- From the travelogue written by Persian envoy Abdur Razzaq in the court of Vijaynagar- and mentioned in RC Majmoodar’s Advanced History of India, gives similar hints.
Anyways, UPSC official Answerkey will clear it.

85. Which one of the following books of ancient India has the love story of the son of the founder of Sunga dynasty?
(a) Swapnavasavadatta
(b) Malavikagnirnitra
(c) Meghadoota
(d) Ratnavali

Lucent GK, Page 35: Sunga Dynasty was established by Pushyamitra Sunga…..He was succeeded by his son Agnimitra-the hero of Kalidasa’s drama “Malvikagnimitra” Hence answer has to be (B). Sanskrit play by Kalidas, tells the story of the love of Agnimitra, the Shunga Emperor at Vidisha, for the beautiful hand-maiden of his chief queen.
Anyways, let’s also prepare the remaining options (through net surfing) – incase the question gets recycled in some other exam!

55. In the context of the history of India, consider the following pairs:

Hence, Only 1 and 3 are correctly matched.
Anyways stupid and tough question. Who has time to memorize Ancient-Medieval dictionary. The collective amount of time and energy wasted in searching this answer by UPSC aspirants on internet….utne mein toh atleast one MNREGA pond could have been dug up.

17. Consider the following statements:
The India-Africa Summit
1. held in 2015 was the third such Summit
2. was actually initiated by Jawaharlal Nehru in 1951
Which of the statements given above is/are correct?
(a) 1 only
(b) 2 only
(c) Both 1 and 2 26. ‘Doctors Without Borders (Medecins Sans Frontieres)’, often in the news, is
(a) a division of World Health Organization
(b) a non-governmental international organization
(c) an inter-governmental agency sponsored by European Union
(d) a specialized agency of the United Nations

McGraw-Hill General Studies Manual 2015: Section General Knowledge Page 64. It is a non-governmental and non-military organization established by group of French doctors in 1971 – with its Headquarter in Brussels, Belgium. This Topic was in News during 2014-15, They came into news items related to Ebola. As such Tough question, because

45. Which of the following is not a member of `Gulf Cooperation Council’?
(a) Iran
(b) Saudi Arabia
(c) Oman
(d) Kuwait

47. ‘Belt and Road Initiative’ is sometimes mentioned in the news in the context of the affairs of
(a) African Union
(b) Brazil
(c) European Union
(d) China Prateek Nayak lecture – IR2/P1: opening slide itself vertim gives this. Actually whole 36 min. lecture is dedicated to this topic only!

94. Consider the following pairs :
Community sometimes In the affairs of mentioned in the news

95. With reference to ‘Organization for the Prohibition of Chemical Weapons (OPCW)’, consider the following statements :
1. It is an organization of European Union in working relation with NATO and WHO.
2. It monitors chemical industry to prevent new weapons from emerging.
3. It provides assistance and protection to States (Parties) against chemical weapons threats.
Which of the statements given above is/are correct?
(a) 1 only
(b) 2 and 3 only
(c) 1 and 3 only
(d) 1, 2 and 3

Britannica: It’s an international organization setup in 1997. By the 2001 Relationship Agreement between the OPCW and the United Nations, the OPCW reports on its inspections and other activities to the UN through the office of the secretary-general. There is no specific mention of EU, NATO or WTO. Therefore, statement 1 is wrong. By elimination of all options with statement 1, we are left with answer (B)

Possible to solve through gut-feeling as well- because EU+NATO+WTO combo seems far-fetched for an organization.

21. Which one of the following is the best description of ‘INS Astradharini’, that was in the news recently?
(a) Amphibious warfare ship
(b) Nuclear-powered submarine
(c) Torpedo launch and recovery vessel
(d) Nuclear-powered aircraft carrier

Answer- A. Mrunal’s April-2016 current affairs compilation ‘The Man who knew infinite’ is a biographical movie of Indian Mathematician Srinivas Ramanujan (played by Dev Patel) and his association with British mathematician GH Hardy. Ramanujan was a self-taught (autodidatic) Mathematician- born and died in Madras Presidency.