[Answerkey] UPSC Prelim-2016: Polity, Science-Tech MCQs Solved with explanations for all CSAT Sets A, B, C and D 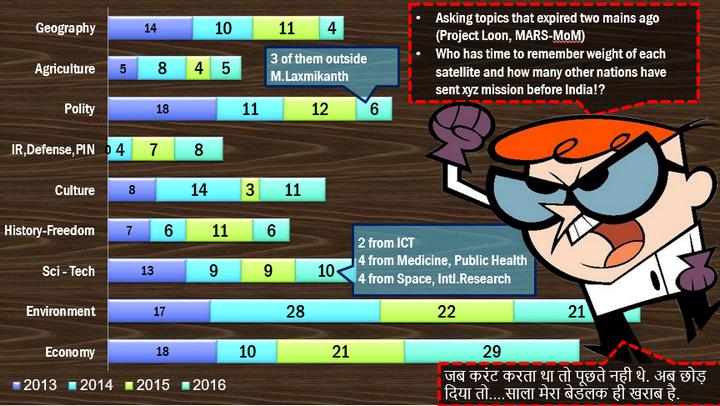 Not much point in comparing with CSAT-2014, because that year, mostly direct theory type questions from NCERTs and GS Manuals. So, in history culture, CSAT-2016 follows 2014 patterns but in science tech it follows 2015 pattern.

Mrunal’s GS3 Mains-2014 revision article  – as you can see, this is two mains old topic. Not just in science-tech, practically in every topic they’ve done this- asking stuff that occurred one or two mains ago.

80. With reference to ‘Li-Fi’, recently in the news, which of the following statements is/are correct?
1. It uses light as the medium for high-speed data transmission.
2. It is a wireless technology and is several times faster than ‘WiFi’.
Select the correct answer using the code given below.
(a) 1 only
(b) 2 only
(c) Both 1 and 2
(d) Neither 1 nor 2

May 2015: NASA has developed and successfully flight tested a battery-powered plane with 10 engines that can take off and land like a helicopter and fly efficiently like an aircraft, says theHindu. Tough question because It’s difficult to even memorize ISRO affairs for 6 months!

62. With reference to `Astrosat’, the astronomical observatory launched by India, which of the following statements is/are correct?
1. Other than USA and Russia, India is the only country to have launched a similar observatory into space.
2. Astrosat is a 2000 kg satellite placed in an orbit at 1650 km above the surface of the Earth.
Select the correct answer using the code given below.
(a) 1 only
(b) 2 only
(c) Both 1 and 2
(d) Neither 1 nor 2

Its color photo is given in the backside of the last page of India Yearbook 2016, but description doesn’t contain the information we seek. Let’s check September 2015 TheHindu

Tough question due to factual orientation and since 2-TF (Two statement true false) hence even by elimination, difficult to arrive at correct answer.

This was in news during June 2016, in context whether BREXIT would impact the funding of this project.
As such project started in 2006, to find whether Nuclear fusion can be a source of energy and electricity in future. Ref: Indianexpress, June 2016. Tough question, because as such it was a low profile news item.

66. Consider the following statements:
The Mangalyaan launched by ISRO
1. is also called the Mars Orbiter Mission
2. made India the second country to have a spacecraft orbit the Mars after USA
3. made India the only country to be successful in making its spacecraft orbit the Mars in its very first attempt
Which of the statements given above is/are correct?
(a) 1 only
(b) 2 and 3 only
(c) 1 and 3 only
(d) 1, 2 and 3

Statement 1 and 3 are right. As per Mrunal’s summary note on this topic
Second statement- whether only India and USA have spacecrafts orbiting mars? Answer is no. European Space Agency’s Mars Express (2003) has two components 1) Mars Orbiter 2) Beagle 2 Lander. Hence 2nd statement is wrong. Tough question because Mars Mission had peaked its utility by Mains-2014. After two years, if some actual information is asked- difficult to arrive at correct answer.

6. In the context of the developments in Bioinformatics, the term ‘transcriptome’, sometimes seen in the news, refers to
(a) a range of enzymes used in genome editing
(b) the full range of mRNA molecules expressed by an organism
(c) the description of the mechanism of gene expression
(d) a mechanism of genetic mutations taking place in cells

As such most of us know that word transcription has something to do with “DNA/gene” but through gut-feeling it’s difficult to solve because answers given in options “B” and “C” are very close. Verbatim definition given in Textbook of Veterinary internal medicine– so option “B” is correct.
7. ‘Mission Indradhanush’ launched by the Government of India pertains to
(a) immunization of children and pregnant women
(b) construction of smart cities across the country
(c) India’s  own search for the Earth-like planets in outer space
(d) New Educational Policy 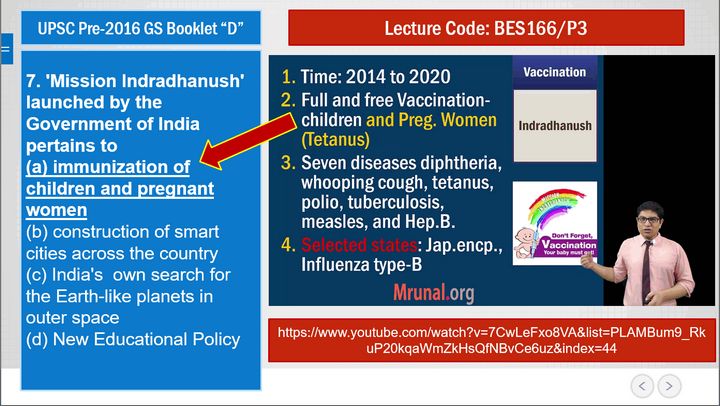 9. With reference to pre-packaged items in India, it is mandatory to the manufacturer to put which of the following information on the main label, as per the Food Safety and Standards (Packaging and Labelling) Regulations, 2011?
1. List of ingredients including additives
2. Nutrition information
3. Recommendations, if any, made by the medical profession about the possibility of any allergic reactions
4. Vegetarian/non-vegetarian
Select the correct answer using the code given below.
(a) 1, 2 and 3
(b) 2, 3 and 4
(c) 1, 2 and 4
(d) 1 and 4 only

According to official notification , Labels have to contains 1, 2 and 4- that much is confirmed. And since UPSC has not given any option on “All correct”. Hence answer C

Not much to analyze further because no. of MCQs are decreased. “XYZ topic in Polity” was in news but they did not ask…if I make a list like, may be it’ll run 5 pages long.

Road ahead for Polity

75. Consider the following statements:
1. The minimum age prescribed for any person to be a member of Panchayat is 25 years.
2. A Panchayat reconstituted after premature dissolution continues only for the remainder period.
Which of the statements given above is/are correct?
(a) 1 only
(b) 2 only
(c) Both 1 and 2
(d) Neither 1 nor 2

15. With reference to the ‘Gram Nyayalaya Act’, which of the following statements is/are correct?
1. As per the Act, Gram Nyayalayas can hear only civil cases and not criminal cases.
2. The Act allows local social activists as mediators/reconciliators.
Select the correct answer using the code given below.
(a) 1 only
(b) 2 only
(c) Both 1 and 2
(d) Neither 1 nor 2
Answer- B

Tough MCQ. Because difficult to proceed by elimination and minute detail asked from a low-profile act.

Answer- C
Rashtriya Garima Abhiyaan is an NGO-led movement for manual scavengers that was in news during 2012-13.   Tough question because factual info about an old-topic.
Now only last part remains in the GS1 Answerkey ie. Geography-Environment-Agriculture