Answer each of the following in not more than 200 words.

Syllabus relevance? These are not ‘out of syllabus’ questions, because, the syllabus of GSM1 mentions Salient aspects of Art, Architecture, literature from Ancient to Modern Times. Emphasis on the words ” Modern Times”. Anyways let’s begin:

Ans1: Classical dances are female domination in modern times. why?

There are three ways to start an answer:

In Modern India, dances be divided in three parts

Thus, classical dance was never a lucrative full-time profession for the male dancers to begin with. In the modern India, classical / folk dance troupes find commercially gainful work in the cultural shows / events in the western countries but such occasions are few and far in between. Hence at most this is a seasonal work for men.

Besides, even if only MALE dancers are given all awards, still it’ll not ensure that all teenager boys of that given state / caste / graduation stream will flock in classical dances- as it happens after declaration of UPSC AIR#1.

In real exam, most candidates would write this answer at last in the sequence (Because as such content is less). And at the end of the exam, you won’t have much time to write a very thoughtful and sharp conclusion. So, better just summarize what we’ve already wrote in body and express concern that this fall of male dancers is not a good development.

Common Mistakes in writing this answer 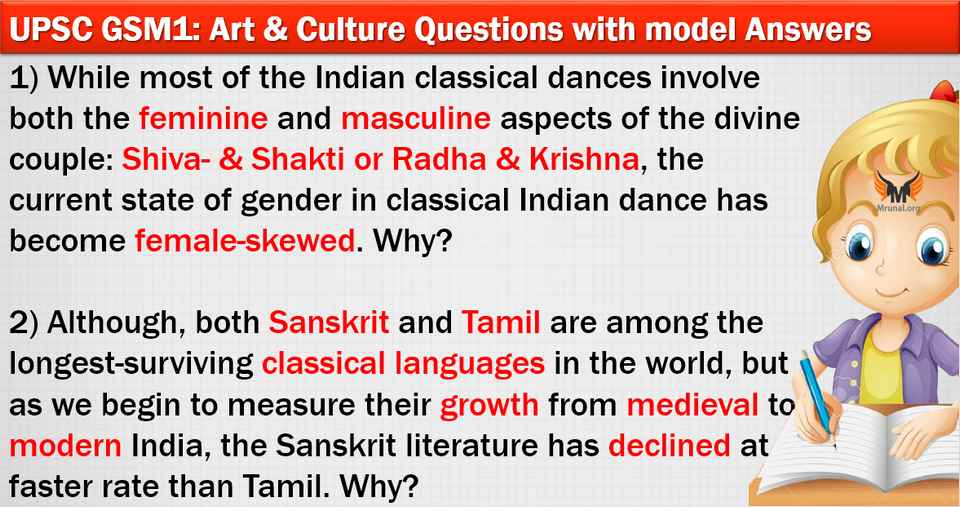 Ans2: Sanskrit Literature not growing much

Again, same problem- difficult to think of enough points to fill 200 words a in real exam, so let’s drag the introductions longer.

Patronage: Before and during Independence:

Observe the formation of underlined sentence. If you don’t write like that, it might give wrong inference that YA English novels are hurting only Sanskrit and not Tamil.

To understand and appreciate the diversity and richness of our culture, we should encourage all classical and vernacular languages. But, literature of a given language cannot grow without 1) appreciative readers 2) commercial gain. Sankrit suffers in both, hence the muted growth in its its literature.

Common Mistakes in this answer: