Answer each of the following question, in not more than 200 words 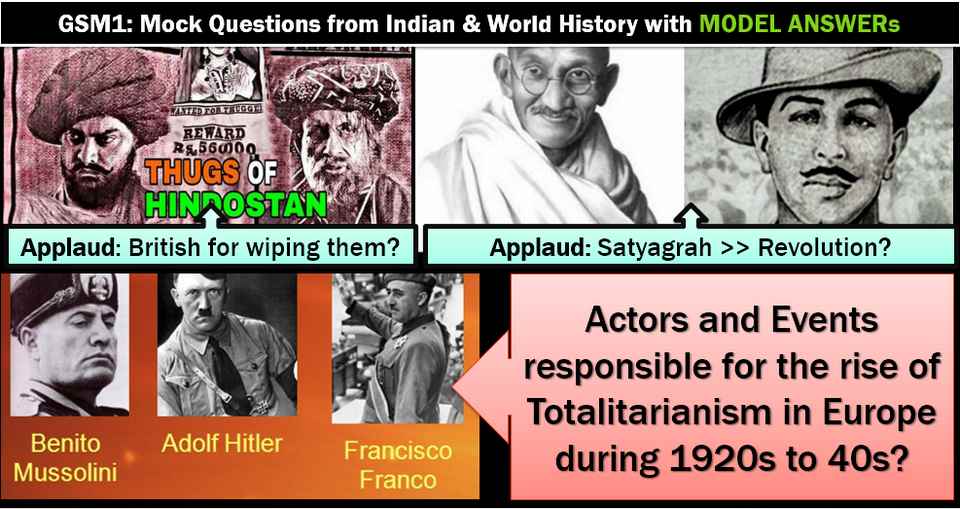 Difficult to write combined introduction of these two elements (1) Thuggee (2) criminal tribes- because again in the second paragraph, you’ll have to give ‘origin’ points of the criminal tribes. So, better treat these two as two separate short notes.

British & the abolition of Thuggee

British land settlement policy and their conquest of princely states further swelled the number of thugs as many evicted tenants, artisan and ex-soldiers joined their ranks. So British themselves had forced many people to become thugs! But, word limit doesn’t allow us to dwell into such finer nuances.

After the Britishers left, why didnot Indian politicians and bureaucrates actively help them? Are only British to be blamed? Again, word limit doesn’t allow us to dwell into such finer nuances. Besides, we are asked to find fault in CTA act, and not in what wrongs happened after independence?

Here also same problem. If you try for a ‘combined’ introduction of all three categories of people, then you’ve to apply more brain (which costs more precious time in the exam.) So, better write answer as two separate short notes (1) Teachers; (2) novelists and poets.
Teachers in freedom struggle
Teachers and educationists channelized and directed the energy of youth towards nationalism and against the social customs derogatory to women and the oppressed. Notable examples include:

Prima facie, it might seem that J.Sarkar and S.Radhakrishan personally did not participate in any ‘Satyagraha’ but they prevented the Western authors, historians and philosophers from brainwashing and propagandizing about the superiority of Western culture and rulers against India. Hence, indirectly they too have played a role in freedom struggle by raising the character of the Indian students and readers.
Similarly, countless teachers whose names are not recorded in the history books, but they too deserve credit and applaud, because their teaching produced the educated leaders who could fluently articulate their ideas in English and vernacular- and thus these leaders could convince both the foreigners and Indians about the need for self rule and independence.
Novelists and Poets:
The publication of novels, short stories and poems in vernacular newspapers and pamphlets brought about an awakening among the masses about our glorious past and the need for Swaraj (self-rule). Notable examples include:

Conclusion: From aforementioned points, it can be concluded that an armed struggle (combined with military help from Germany or Japan) could have led to a quicker but only partially-inclusive and partially-democratic independence for India. For these reasons, a Khadi-clad satyagrahi deserves little bit more credit than a death-defying revolutionary.

Question: Write a short note on the events and actors responsible for the failure of democracy & the rise of totalitarianism in Europe from 1920s to 40s.
This one is quite easy IF you’ve Watched Pratik Nayak’s World History Lecture series. Basically you’ve to write the gist of ‘Interwar’ years. मित्रों, ये कोई बड़ा कठिन सवाल नही है.

Introduction: (Origin)
The First World War came to an end in 1918 and the Paris Peace conference was held in 1919. Many treaties including the Treaty of Versailles were signed during the conference, wherein the defeated countries were badly treated and victors were showered with the spoils of war. Consequently, following events and actors shaped totalitarianism in Europe between 1920s to 40s.

Now think about this- we only have 2 points about ‘interwar years’: (1) rise of Hitler and Mussolini after Versailles (2) Policy paralysis / inaction by England, France et al. So, how to stretch this into 200 words? well, you’ve to ‘narrate’ how dictator came into power, and what type of atrocities happens in Totalitarianism. Then easily answersheet can be filled up.

Conclusion: The rise of totalitarianism in Europe during 1920s to 40s was a result of not just the actions by Hitler or Mussolini but also by the events where the democratic powers indulged in inaction or ill-action. (Treaty of Versailles was an ill-action.)